And what is “Jerusalem Day“, you ask?  It is a holiday in the State of Israel, celebrating the 51st anniversary of the Jewish Liberation of Jerusalem, uniting it as one city, the GREATEST City, in the State of Israel.  And our President Donald Trump has given the Jewish people of Israel another great gift this year-the recognition of Jerusalem as the capital of Israel, deciding to finally move the US Embassy from Tel Aviv to Jerusalem.

In 2007, my husband and I went on a trip to Israel with Michael Medved and his family, where we toured most of the country.  Aside from the very hot weather in July, the trip was wonderful, and very enlightening.  Here are some of the pictures I took on that trip.

The Western (or Wailing) Wall, a remnant of the Second Temple, destroyed by the Romans in 70 CE. 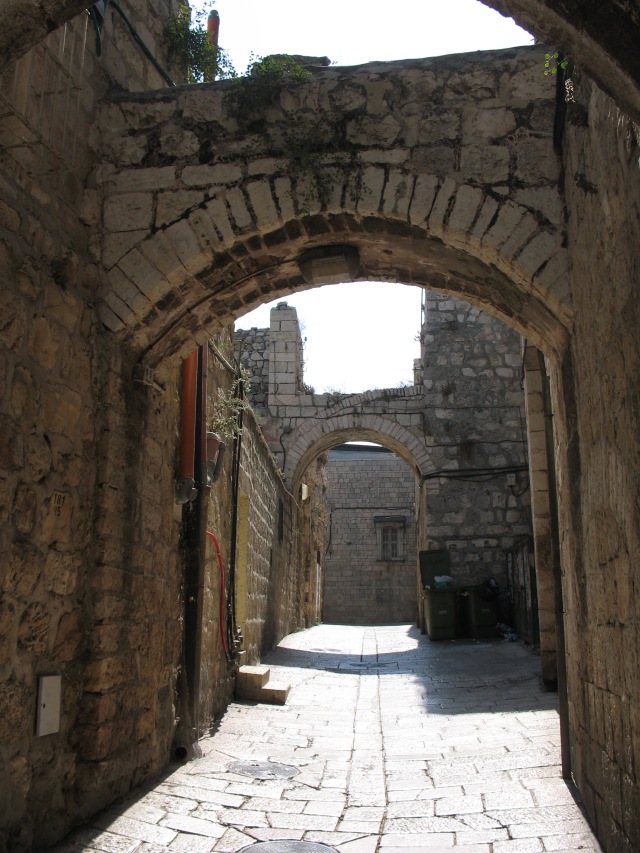 A street in the Armenian Quarter of Old City Jerusalem.  There are many of these back streets, not normally visited by tourists, that really have character.

The view from the Old City Wall.  Can you see the cat?

The view from our hotel room.

And here are a couple of pictures from other places we visited in Israel.

Just looking at this painted garage door in Safed makes me smile.  It’s a Klezmer band.

We spent an afternoon walking through the ruins at Masada, where a band of Jewish fighters and their families committed suicide rather than be conquered by the Romans.  All through our existence, over 4,000 years, we Jews have had to fight for our freedom-for our very existence.

This Jerusalem Day celebrates a huge victory for Jewish Freedom.

**But this victory will not be final until the Muslims are forced to relinquish their immoral control over the Temple Mount.  This was a major error, and needs to be rectified now, and not later.