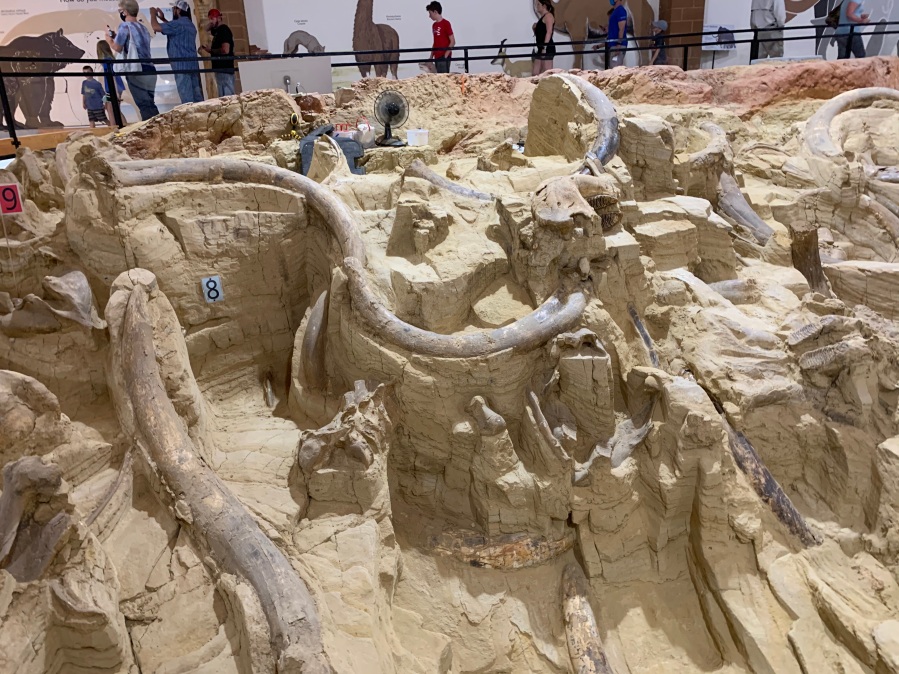 My first entry for this week’s challenge tells a sad story, one that is still being written all over the world.

Each one of those empty, surplus chairs from June of 2020 was from the desk of a person, an employee who contributed to the success of an aerospace manufacturer.  Every empty chair represents an engineer, or an inspector, or a buyer, or an accounting manager, or a contract administrator.  All those employees were laid off, due to the unnecessary Government shutdowns of the world economy during the CCP Virus pandemic.  Those chairs represent wasted human capital, and most of those chairs remain empty.  One of those chairs was mine.

In September of 2020, we took a driving vacation to South Dakota, to meet up with a bunch of free people; our Ricochet.com internet friends.  One day, we drove to the Mammoth Site, where, inside a big building, we viewed a huge hole in the ground, which itself told a very interesting story, from over 10,000 years ago.  The archaeologists uncovered what was once a huge watering hole, above a sinkhole, which trapped hundreds of prehistoric animals, from deer and bears, to huge Woolly Mammoths.  From the ways in which all the skeletons were arranged, the scientists could reconstruct what happened to everyone who stepped too far into the water to drink, and was pulled under.

From the arrangements of the bones and tusks, the scientists could tell which bones made up which creature, and could reconstruct the narrative of how they came to be where they are.  This story, too, is still being written, as we were told that there is still 200 feet of excavation still to be done at the site.  The deaths of those majestic creatures tell a very intriguing story to us, from thousands of years ago.

3 thoughts on “Lens-Artists Photo Challenge #176: One photo, one story”