I love watching the birds that come to our seed and suet feeders in the back yard.  Especially when it’s snowing.  Here’s who showed up the last couple of days. 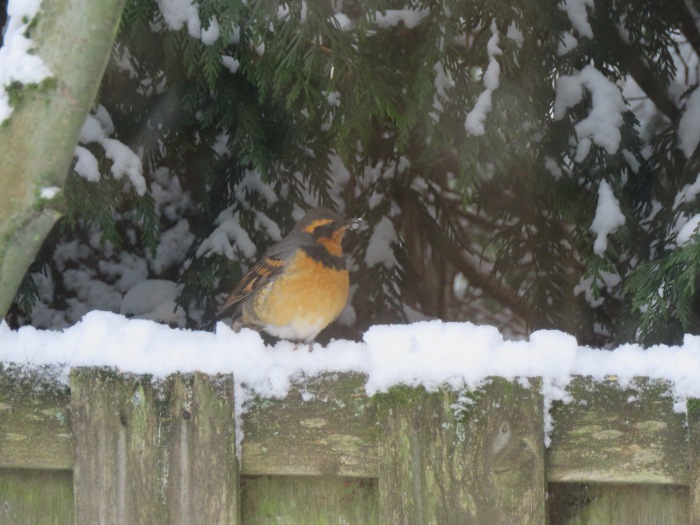 Our Varied Thrush has a bug in her beak!  They are carnivores, like their Robin cousins.

A pair of Song Sparrows.  They were fighting Juncos and Chickadees for the feeder stations. 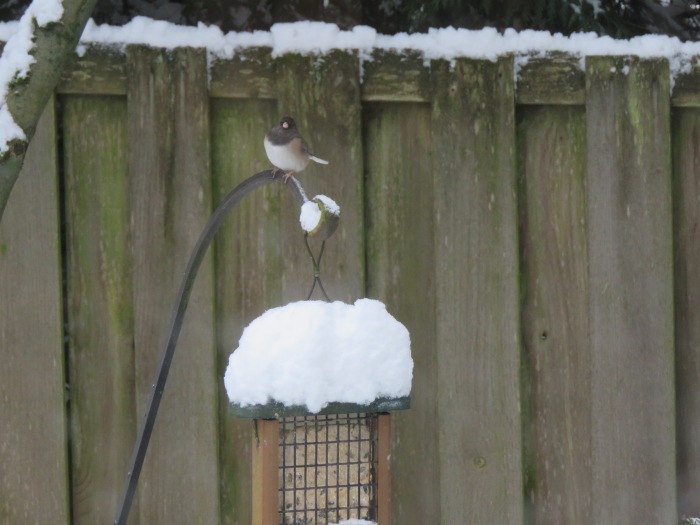 Junco atop the suet feeder, waiting his turn at the seed feeder.

Below are visitors from previous years. 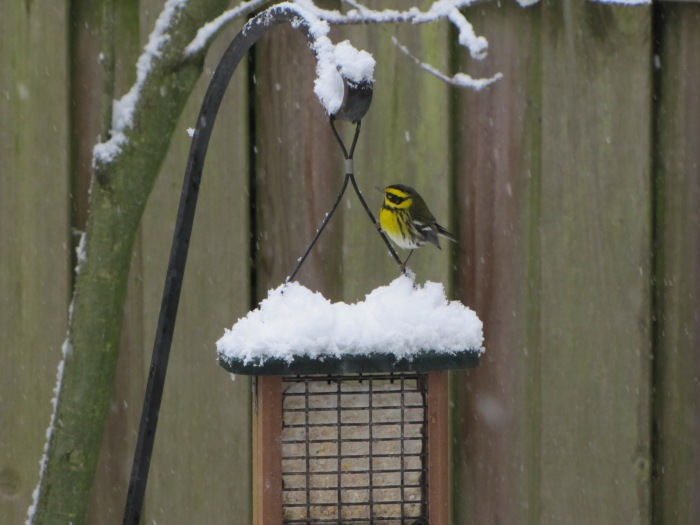 My very favorite has to be the little masked Townsend’s Warbler. Isn’t he cute?

I could just watch them all day long.

Living in the Pacific Northwest (AKA Pacific North-Wet), means mostly rain and not much snow.  However, the Cascade and Olympic Mountains are within a 2-hour drive from most places.  Here are some pictures of the area where I live, from previous years.

My own back yard bird feeder, with a junco and song sparrow.

This is the parking lot where I work.  January of 2011, where the snow started around 7PM the previous night, but people were distracted much of the day, admiring the snow-covered trees.

The ski area at Stevens Pass, along Highway 2 in the Cascade Mountains, about an hour from our house. 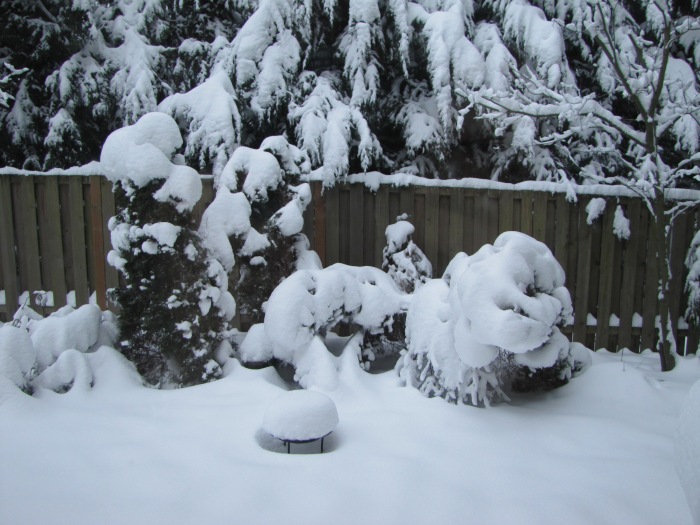 Snow “sculpture” in my back yard.

This has got to be my favorite winter bird picture. He’s a Townsend’s Warbler, and he comes back every year, even when it doesn’t snow, like here in 2012.  He looks like a little bandit, with his black mask.

This one’s a ringer!  That picture of Bryce was taken in October, and certainly not local!

Anyway, here’s to Winter, bringer of Cold, but Beautiful!

Wherever I go, I watch for birds.  Even in my back yard, I love watching our birds at the feeder.  Normally, juncos are ground-feeders, but ours just love hogging the feeder, watching for chickadees and nuthatches who might want to get in.

This is a junco and our song sparrow vying for the preferred station on the feeder, and there’s another junco perched on the side of the suet feeder on the right. 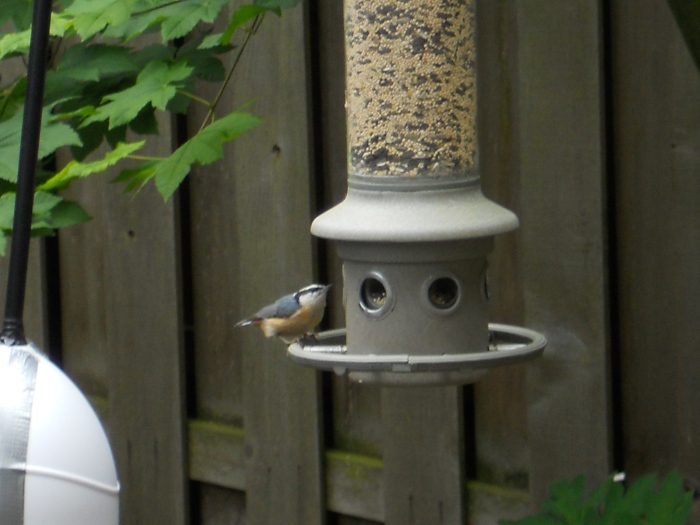 Here’s one of our nuthatches (we have at least two pairs who frequent our feeder).  They usually go for a sunflower seed, then take it to the top of the fence to tap it out of the shell to eat.  They can go back and forth numerous times, rejecting the millet seeds and teasing out the sunflower seeds.

When we go on vacation, I especially love seeing familiar birds in new locales.  We met up with this fellow at Bryce Canyon National Park in Utah.

I think he was actually posing for me!

Also in the Southwest, we went to the Desert Botanical Garden in Phoenix, and I added two new birds to my life list.

Our recent trip to Hawaii on the Crystal Symphony added new birds, but also new views of familiar birds.  From the deck of a cruise ship, you can get a view of a bird flying below you, like you rarely can on land.  Before we even left San Francisco, I got pictures of familiar birds from on the dock, and standing at the rail.  We have Western Grebes in western Washington, and here they are in San Francisco.

And from the Promenade Deck on the Symphony, I was able to get good pictures of the various kinds of gulls that were fishing in the harbor.  I think there was a big school of fish right there, since we saw pelicans, Western Gulls, California Gulls, and Herring Gulls wheeling in the air and crying while scooping up fish at the surface. 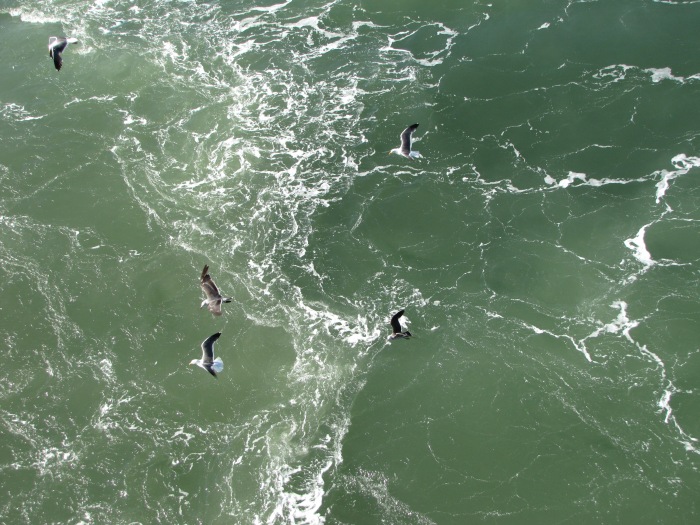 Autumn and winter are now approaching, which will afford me great opportunities to see local birds, right in the back yard.  My camera will be ready!

I am an amateur bird-watcher, and when I see a new one, I check it off on my “Life List”, which is in the back of my 1960s edition of Roger Tory Peterson’s Field Guide to Western Birds (which is now a collector’s item).  Fortunately, in this guide are two pages of pictures of Hawaiian birds, one of natives, and one of introduced species.  All but a few of the new birds I saw is on those two pages.  Here, first, are the new ones I saw.

This is a Barred Dove, which we found in the center courtyard of the Ala Moana Shopping Center, at the Starbucks there.  We saw lots of these around all the islands we visited, and they formed small flocks.  I thought they were prettier than the common pigeons we see in most cities.

This black bird is an Indian Mynah, and their screeches fill the air everywhere in Hawaii.  They fill the niche of the Brewer’s Blackbirds we see on the mainland.

The one on the left is a juvenile bird. 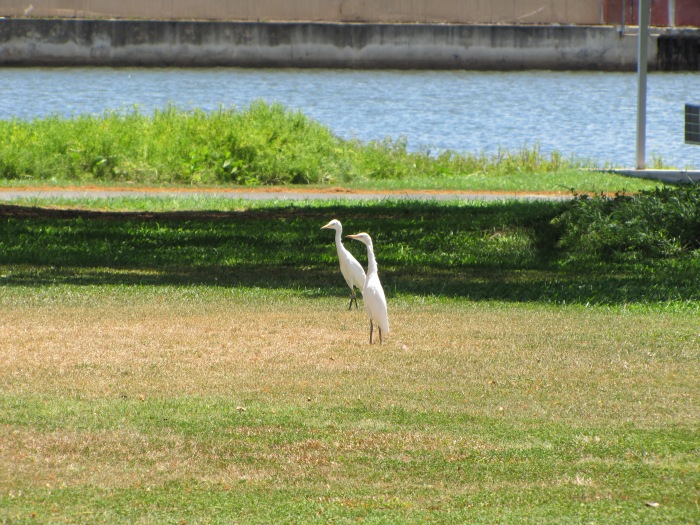 These are cattle egrets, and they were everywhere around Pearl Harbor.

And this fine fellow is a Snowy Egret, and I actually saw him in Ensenada, Mexico.

Here’s an introduced species, seen at Pearl Harbor.  He’s a Brazilian Cardinal, and was actually easy to identify by his red crest and black-and-white body.

This is a pair of Saffron Finches.  Aren’t they pretty, with their yellow bodies and orange heads?

As we headed home from Hawaii through the North Pacific, birds were pretty much absent.  However, as we approached Ensenada, Mexico, I was happy that I had my camera with me on my walk around the Promenade Deck in the early morning, because I was able to “capture” a sea bird that was new to me.

This is a Masked Booby, and I was thrilled that I could get this good of a picture.

However, there was one new bird whose picture I took that I could not identify.  He was in the grass in the company of the saffron finches, and I have no idea what he was.  Maybe one of my loyal followers can identify this Hawaiian bird.

I’m sure they’re some kind of finch, but nothing I found in my bird book looks like this, with the all-over gray body and red “mask”.

Bird-watching is a very rewarding pastime, and the fact that I got new ones for my life list in Hawaii will always bring a smile.

I love bird-watching, and when I’m outdoors I try to find them.  But sometimes, when I’m doing something else, one will catch my eye.

This guy was on the roof of an accessory dwelling in the back yard of a friend in Colorado.  What a place for a feeder!

We were surprised when a family of quail skittered across our path, down at the Desert Botanical Garden in Phoenix.  I wasn’t looking for birds, just cactus.  And they have such great camouflage, you have to be attentive to movement!

We were just walking the trail along the Sammamish Slough in Bellevue, Washington near where we live, when the sound of this little marsh wren attracted us.

Just captured this this afternoon.  Black-capped Chickadees, Chestnut-backed Chickadees, Red-breasted Nuthatch, and Dark-eyed Juncos.  From about two feet away.