Or, as Ben Shapiro puts it,

New York Governor Cuomo wants to ban the Death Penalty…Except for Unborn Children; go ahead and kill those. 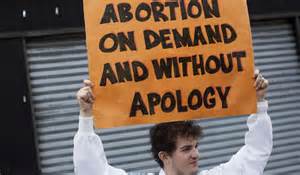 Last week, New York Governor Andrew Cuomo signed into law the most comprehensive abortion law in the United States.  This new law, passed by the now-100%-Democrat controlled Legislature, allows termination of a pregnancy up to the moment of birth.  Yes, that is correct, New York now allows a full-term BABY to be murdered if the mother and her doctor deem her health in danger.  Various “news” outlets describe this as “updating” New York abortion laws, and “adding strong legal protections” for “abortion rights”.

The above-mentioned Governor of New York is nominally a Catholic.  As I remember it, the Catholic Church forbids contraception, and defines abortion as murder.  And the Catholic Bishops have reacted to this new law that is celebrated by Governor Andrew Cuomo.

Bishops call for Cuomo to be excommunicated.

Look at that tag line on the podium.  No Time to Wait.  And the title of the new law is the “Reproductive Health Act”.  However, one thing the act ignores is the fact that the pregnant woman is not the only individual affected by abortion.  What about the child?  Well, this new law in New York deems that child disposable.    The statistics show that, in New York, more black babies are aborted than are born.  Does this indicate discrimination against minorities?  Nope, the Progressives in New York are perfectly fine with it, since Abortion is their Holy Sacrament.

And what about the Abortion Doctors?  Doesn’t the Hippocratic Oath say “First Do No Harm”?  I guess that in New York, the Culture of Death rules even the medical profession.    This list was taken off a Web Site called “safest abortion”, by a medical group, NY OB-GYN Associates.

Although, there are some pro-life doctors who have spoken out against this destructive (literally!) new law.  But it appears that they are in the minority.

It is a crying shame, what Feminism hath wrought in the United States, and around the world.  Human beings are reduced to the status of afterthoughts, permitted to be done away with, even if they can sustain life if allowed to be born.  I never had children myself, but this new law makes me very sad.  I weep for the babies who will not be allowed to live, and contribute to the tapestry that is Humanity.

The pope has given Catholic priests permission to absolve women of

the sin of Abortion.  This seriously makes me fear for the oldest continuous Western cultural institution.  Church doctrine sees abortion as Murder.  Is that still true?  Catholic readers, kindly enlighten me.

This recent move by Pope Francis concerns me.  Since Jorge Bergoglio was elected Pope, much has been written about his leftist leanings.  His writings have indicated that he is open to relaxing some Church strictures on marriage (in favor of Communion for divorced or cohabiting people) and homosexuality (playing down the strictures against homosexual behavior).  He has intimated that he thinks Capitalism mitigates against helping the poor, and that governments can mandate that their citizens pay higher taxes to support the poor.  In the recent conclave at the Vatican, an American Cardinal, Raymond Burke conveyed that he thought some of the new ideas were bad for the Church.  For his troubles, that Cardinal has been demoted in Rome.  I just hope this dustup is not an indication that the Catholic Church, the oldest surviving institution in the history of mankind, is losing its way.

I would welcome any comments by any of my Followers about this issue.  I am ready to be informed and enlightened.

P.S. Guaranteed way of getting lots of comments on a Ricochet.com post: Put Catholic in the title. You start it, and they run with it.

Here are three items from the local and national news:

1. The traffic report on our local conservative talk-radio station is now sponsored by…..get this……Al Jazeera News! So, along with your morning and evening drive-time Talk Radio from the likes of Rush Limbaugh, Sean Hannity, and Michael Medved, you now hear plugs from Jihad Central. The more you hear about them, the more they hope you will see them as legitimate. Hmmmm….

2. More ominously, the State Attorney General has issued an opinion that any hospital that offers maternity services must also offer abortion services. This is in response to the local Catholic hospital chain merging with other local hospitals (not Catholic) So now religious institutions who run their health-care branches according to their own religious principles, will be persecuted by the State Government if they try to run their hospitals following their religious precepts. Do you really think the Catholic hospital system will give up maternity services? I foresee a battle royal over this issue.

3. Bradley Manning, recently convicted of egregious crimes of releasing classified government documents to an organization whose reason for being is bringing down the US Government, and sentenced to 35 years in prison for his crimes, has declared that he is NOT a Male, but a Female (Chelsea!), and wishes to begin hormone therapy immediately, to convert from Male to Female. ON YOUR DIME!! Do you really want to pay for his sex-conversion therapy while he is in Federal Prison?? [with apologies to Rush Limbaugh, do you want to pay for Bradley Manning’s “chopadickoffamy” operation??]