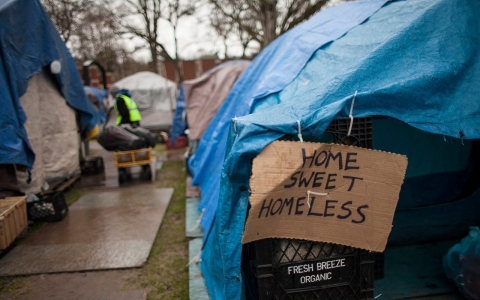 A short while ago, the city council of Seattle unanimously passed an “employee hours tax,” more commonly called a “head tax” on businesses with $20 million of gross income earned in Seattle. The tax was intended to pay for more “services for the homeless” whose plight were supposedly caused by all those disgusting, high-paying jobs that companies like Amazon were foisting on Seattle.

For months before the tax was actually passed, every local media outlet, from TV stations to neighborhood weekly newspapers to local blogs, discussed how harmful such a tax would be for the city. Of course, the individuals who were elected by the citizens of Seattle were absolutely convinced that the tax would never push any business out of the city, and would generate bags and bags of money for them to spend.

So they were shocked, shocked, when the minute that tax passed and was signed into law by the new liberal, homosexual, lawyer mayor there was a group starting a petition to have it repealed. The repeal referendum was wildly popular, backed by Amazon and Starbucks, and in only about a week garnered enough signatures to make it onto the November ballot.

Now who is shocked? The Seattle City Clowncil, under cover of darkness, just passed a new law, repealing the new tax! Madam Mayor, of course, signed it. This is getting ridiculous. That referendum petition is still in force — the people who started it aren’t totally convinced that the repeal will stick, and they say the city should be “held accountable.”

And now, there is a lawsuit against the council, stating that they violated the “open records act” when they met behind closed doors to pass the repeal. Various members of the council are trying to explain away the fierce opposition to their “tax on jobs.” One of their favorite explanations for the defeat of the tax is fairly standard these days: It was just a lack of proper “messaging” about the many benefits of such a tax! Now, where have we heard that argument before, I wonder?

To top it all off, the latest smart idea is to house the homeless in the Lobby of City Hall at night! Yep, a homeless shelter literally at the doorstep of those city councilpersons. I’m guessing, though, that those homeless individuals would have to be cleared out by 8 AM so their “hosts” would never actually have to see them or step over them on the way to their cushy offices. The homeless and street people of Seattle don’t normally move aside the moment one of their betters demands it, so maybe those who love the homeless so much will actually get to see them every day. I sure hope so.

Ed: Cross-posted over at Ricochet.com Member Feed.  Want to Join Ricochet?  We’d love to have you!  Drop on over to Ricochet.com and get a 30-day free trial.

~~~IT IS CRACKING!!!  David Horsey is a big liberal, and editorial cartoonist.  Check out his latest in the Seattle Times!  This is a miracle!