It’s Been A Year

2018 has been quite a year in the RB49 Universe.  We survived just fine, but not without some bumps and bruises.  Well, whose life doesn’t have some bumps?

On January 2, we got a new Grand-Niece, when my nephew became a Dad.  She’s a cutie, and I’m going to her first birthday party tomorrow.

Also in January, I received a promotion and a raise in salary at my job as a Buyer at an aerospace company.  Later in the year, I received another raise in salary.  But along with that promotion came lots of new responsibilities connected to the re-organization of our department, and I have to admit I have felt overwhelmed at times.  When I left for the year on December 21, I had over 800 emails in my inbox that I simply did not have time to get to.  And when I logged in today, I found that, even though my contacts are aware that the company is closed, they are still sending me email and expecting responses!  So I know that when I return I will have a full docket.  Sigh…it’s a burden being indispensable! Oh, and I almost forgot.  On January 2 I celebrated my tenth anniversary at my company, which is big for me, since it’s the longest I’ve ever stayed at any one job.

In the “bumps and bruises” department, for the first time since I have been married (2003), I spent so much time in various dentist’s chairs, I maxed out both dental insurance policies!  I lost a bridge that had been in my mouth since age 11, when one of the two anchor teeth turned out to be rotten, and I lost a molar for the same reason.  So in 2019, one of my first items of business will be to get an implant where the bridge was. Well, when you get to be age 69, stuff tends to start falling apart.  I come from a family with bad teeth, so it’s not unexpected.

In April, we did a whirlwind Hillsdale College National Leadership Seminar in Colorado Springs, where we met up with our Ricochet friends and attended some very interesting lectures. 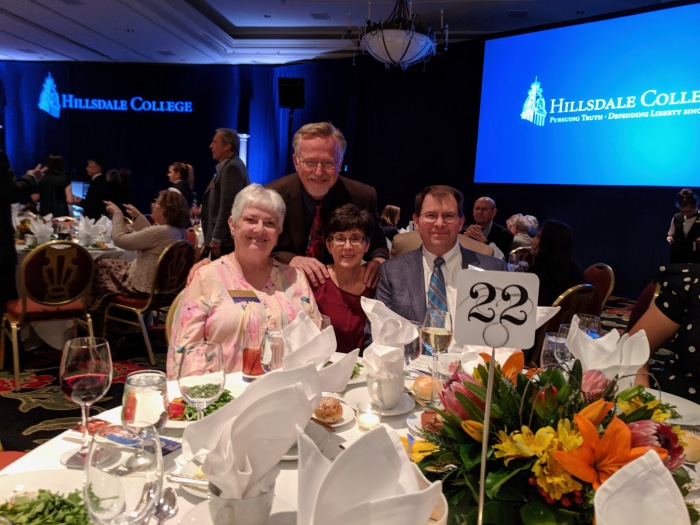 On a sadder note, also in May, my brother-in-law succumbed to liver disease, and my sister was left a widow.  We are closer now that we were before, and I have come to understand better, how much she has always done for our family.  I surely appreciate her more.

Throughout the year, Hubby and I took our normal amount of day trips, to the Diablo Lake Overlook in the North Cascades, and to LaConner in Skagit County.  In July/August, we went on the Hillsdale College Cruise to Hawaii and back, and my readers will have enjoyed my essays on the subject.  Well, it’s December, so here’s a little reminder.

At the end of August, Hubby had a total knee replacement operation, and he was out of work for the entire month of September.  I got a lot of exercise, going up and down the stairs bringing him stuff in our bedroom.  He has bounced back, and recovered nicely, and has resumed playing easy squash at his athletic club.

In November, we went to Victoria, BC for an accordion function with Hubby’s band, and had a nice time reacquainting ourselves with the town.  So here we are now, in the last week of the year 2018, and all in all it’s been pretty good.  We are both healthy, safe, and gainfully employed.  2019 will be a bit unsettled, as my company was sold in the fall, and the sale will close in the third quarter.  We have no idea what our fate will be, but we expect some big changes, and some job cuts.  Normally, the company who bought my company, has a reputation for “slash-and-burn” tactics when it buys another company, but this time may be different as we are about equal in size.  Who knows, I may be required to retire next year, even though I sure don’t want to.

Just two days ago, I again got in my car, and drove to Seattle to participate in the University Unitarian Church full-length Messiah Sing/Play-along.  My stand partner was there again, and we had a great time playing the awe-inspiring music of Handel, and listening to the big choir sing the inspiring words, all taken from the Bible.  It just makes my heart sing, and brings a smile every time.

One thing I do know is that this blog will continue in the New Year.  I heartily wish all my followers and readers a Happy New Year, and very best wishes for a healthy, prosperous 2019.

rushbabe49 Middle-aged, well-educated Purchasing professional in aerospace field. I play violin, and have played Carnegie Hall with my orchestra. I discovered Rush Limbaugh in 2001, and am now a devoted follower. I also strongly support Hillsdale College.
Published December 28, 2018