I live in the Pacific Northwest (AKA Pacific North-WET), which is known for lots of rainfall.  We do get our share of rain, but it’s mostly light rain, rarely the kind of “raining buckets” that I have seen on the East Coast.  Rain doesn’t stop most activities-you can see kids playing soccer in the rain most times of year.

Back in 2016, we had a rather spectacular short rainstorm while I was at work one day.  Our factory building has very high ceilings, with heavy plastic skylights at intervals, and when it rains hard, it makes quite a distracting racket.  This time, I went over to the door nearest my desk, and took my iPod with me, and captured this heavy rain in a short video.  You can see at the bottom, the river spewing out of the ground-level downspout.  If you look toward the rear, you can see the cars in the parking lot, hubcap-deep in water, since the drains simply couldn’t handle that much water at once.

It took about an hour for all the water to drain from the parking lot after the rain stopped.

My attitude toward getting caught in the rain is: You won’t melt, and you won’t drown, and you will dry off.

Next, the “Far” part.  In 2018, Hubby and I took a cruise with Hillsdale College to Hawaii, round-trip from San Francisco.

The first stop on the cruise was, of course, Honolulu.  And once we docked, the first stop on land was the Ala Moana Mall, where I had not been since 1962.  In the middle of the mall, there is a river, with various levels and ponds containing the obligatory koi carp, and water lilies and other plants.  It makes a nice quiet respite in the middle of all the action. 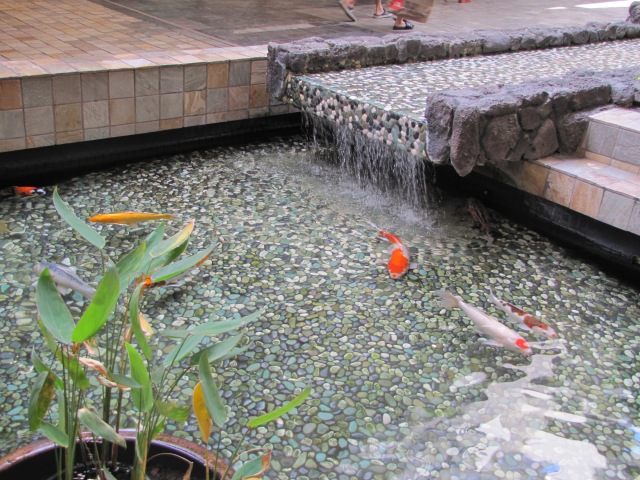 Our first stop after Honolulu was Lahaina on Maui.  It just so happened that there was a surfing competition going on that day, and we got to watch some of the teenagers compete.  They would go out in groups, then come back in one by one.

All four wore different colored shirts so they could be told apart by the judges on land.  A good time was had by all, and we spectators were treated to some expert surfing by the young competitors.  All wet, but in a very good way.

2 thoughts on “Lens-Artists Photo Challenge #95 All-Wet, Near and Far”