These are Armed Domestic Terrorists, allowed by the city government to control a portion of the city.  They set up barricades, stop residents and business owners from going by, and threaten them.

Do these look like peaceful demonstrators to you?  The Seattle Police Department Third Precinct has been abandoned, turned over to the likes of these armed terrorists. 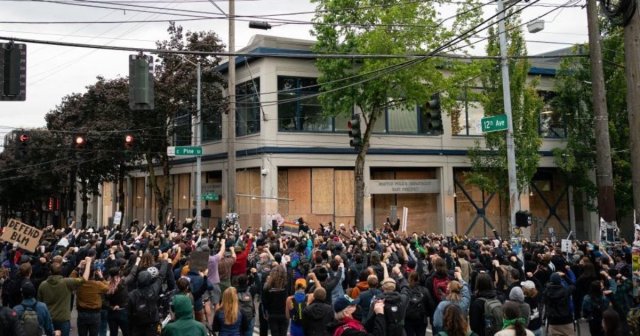 The Rule of Law has been overturned in Seattle, with the approval of those who are supposed to be protecting the citizens.  The Mayor, the City Council, and the Seattle Police Chief, Carmen Best, all bear responsibility for this.  It’s funny, actually, since the average Seattle resident is a supporter of “gun control”.  They approve guns for Antifa, and for the security details of their elected officials, but not for the citizens that need to defend their property from the terrorists above.

Seattle is in for a lot of trouble.  And they asked for it,