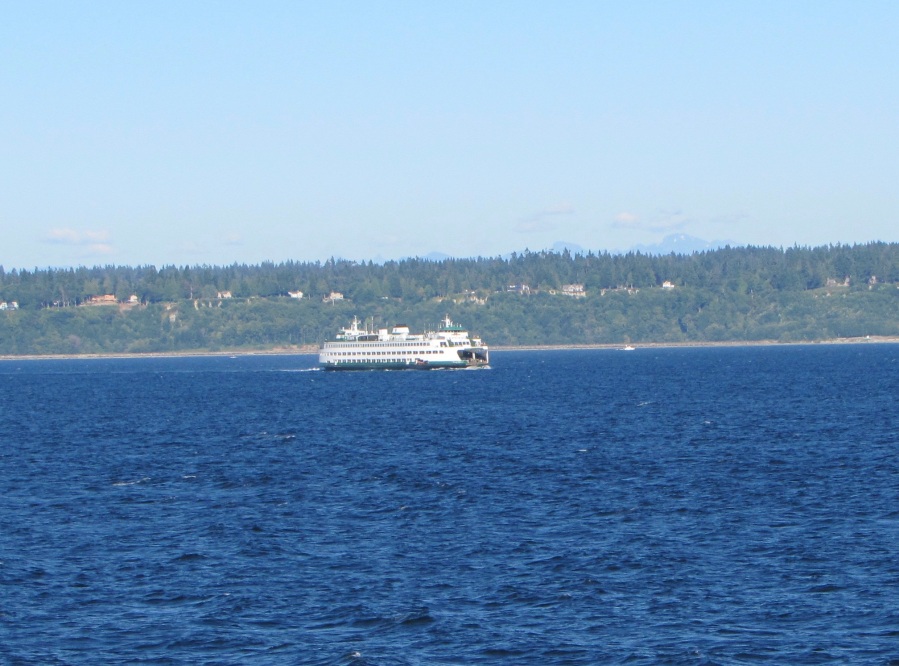 Better known around here as the Washington State Ferry System, which connects the Puget Sound mainland cities of Seattle, Edmonds, Tacoma, and Mukilteo with the numerous islands in the Sound, and the Kitsap Peninsula, and even Canada.  Thousands of island residents commute via ferry daily, either walking on or driving their cars.  And every year millions of tourists, both local and from around the world, drive onto a Washington State Ferry to see the myriad sights of our beautiful region.  Here is a map of the various ferries that serve Puget Sound. 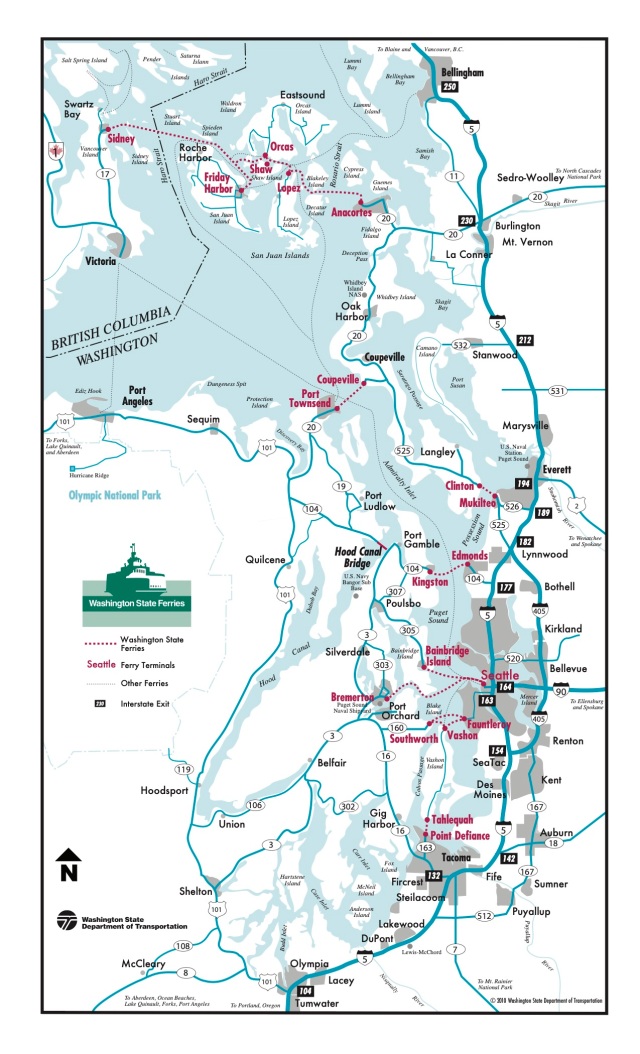 Our closest ferry terminal is in Mukilteo, and the ferry goes over to Whidbey Island.  People I know have commuted to Everett or other places in the north Sound from Whidbey.  Some of them ride in vanpools to work every day-a pretty unusual combination of mass transit.  Here’s a nice photo of the Mukilteo Ferry Terminal.

You can see the holding area on the right, and the ferry at the dock in this picture.  There is a steep hill going down to the waterfront, and this picture was taken from the window of Arnie’s Restaurant, with a great view of the ferry and Puget Sound.  The trip to Clinton, on Whidbey Island is short, just 15 minutes.  The trip from Edmonds to Kingston is 30 minutes, and Seattle to Bremerton is an hour.

When we go on the ferry, I always take my camera, because you don’t know what sights await you from the deck of the boat.  The ferries run in all weather, but have been known to cancel sailings if the winds are too high, or the tides are too low for the ferry to dock.

When I went on my little vacation to the Olympic Peninsula in 2019, instead of taking the Kingston Ferry home, I took the Port Townsend-Keystone Ferry that goes to the north end of Whidbey Island.  Here’s the ferry I took. 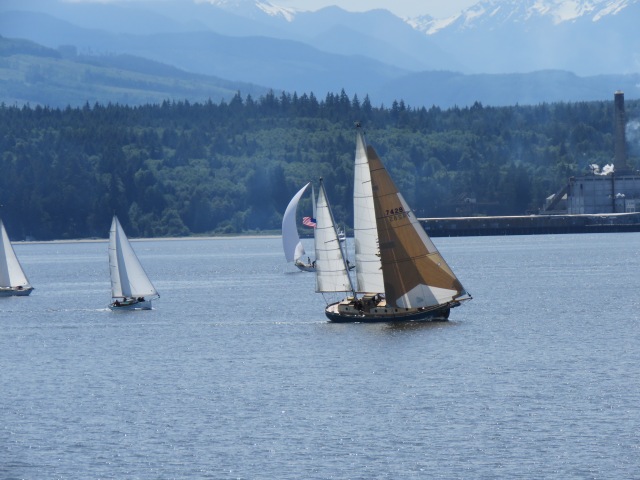 I got this nice sailboat picture from the deck of the Salish, just as we were leaving Port Townsend.  From Keystone, I drove to the south end of the island, and took the Mukilteo Ferry the rest of the way.  It was more expensive, but the scenery was pretty spectacular, and I wasn’t in any hurry.

Hubby and I get in the car and take day trips to the Olympic Peninsula pretty much every year.  The route never changes, but there’s always something new to see. 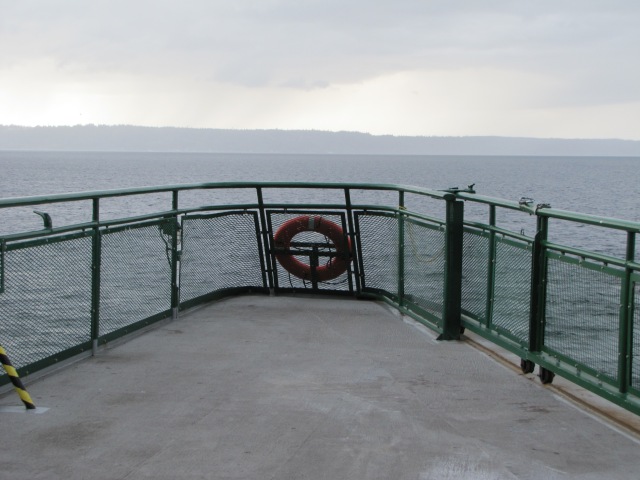 Here’s the view from the bow of a ferry, with the Kitsap Peninsula across the Sound.

The clouds were pretty threatening that day, but when we reached Kingston and drove off the ferry, things had changed a bit.

Puget Sound is subject to all kinds of weather conditions, and you can experience them all from the deck of a ferry.  My favorite trip is the one from Anacortes, through the San Juan Islands, to Sydney, BC, on Vancouver Island.  The ferry stops at multiple islands on the trip, and each one has its own kind of scenery.  On nice days, you can sometimes see the mountains off to the west.

Mount Baker almost looks like it’s floating in the sky!

Here are a couple of pictures of the San Juan Islands, taken from the deck of the ferry. 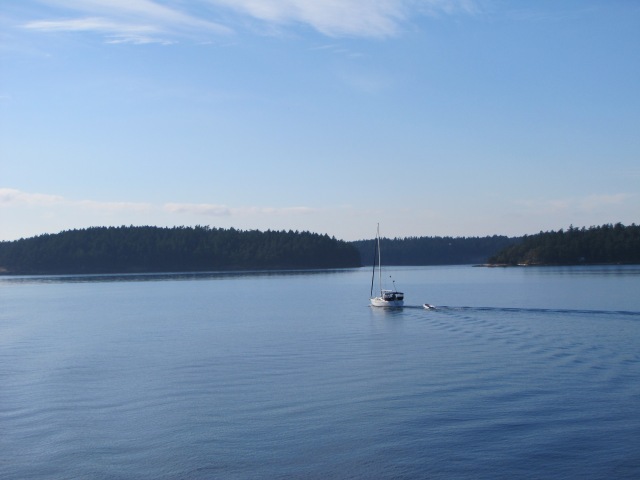 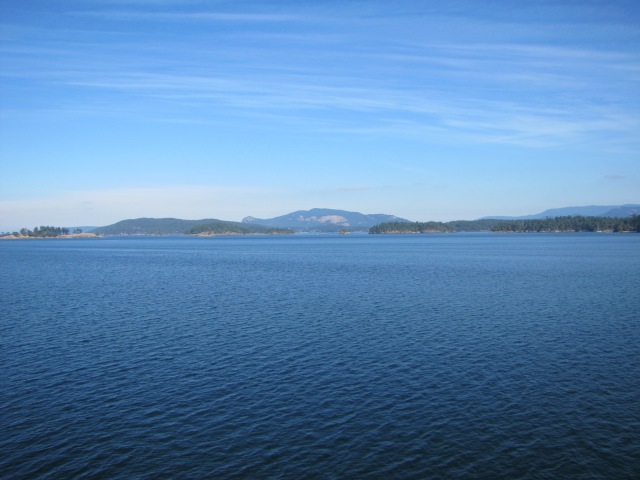 I think my favorite picture taken from the deck of a Washington State Ferry would be this one, looking south from the ferry deck, going from Kingston back to Edmonds.  That’s Mount Rainier.

Picture postcard, do you think?

If you have kids, a ferry ride in the summer is always a good way to get out of the house and show them what other parts of the state are like.  If you are a tourist in Washington State, a ferry ride is the ultimate, inexpensive Pacific Northwest experience.  These kids were having a great time at the bow, getting buffeted by the wind, and watching where the boat was going.  This particular day, everyone was watching a big cruise-ship on its way out of Puget Sound to sail to Alaska.

If you have a vacation planned in the Pacific Northwest, be sure to take a ride on a Washington State Ferry, so you can say you sailed down the highway, instead of driving.