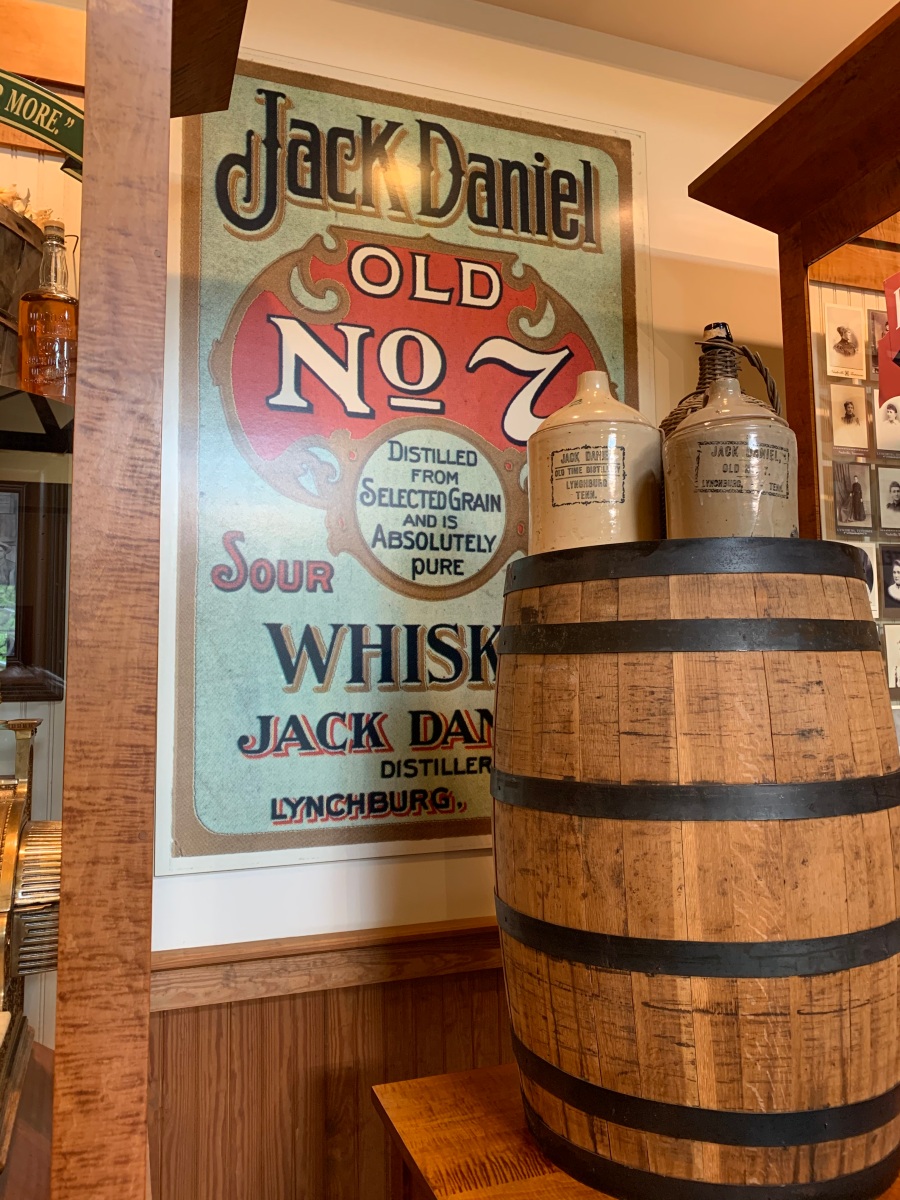 Last Wednesday, April 28, was our big Ricochet Meetup day, and it started in the morning when Phil Turmel and his wife Patricia picked us up at our hotel for the drive to Lynchburg and a tour of the Jack Daniels Distillery.  Stad and Neutral Observer were already in the big Suburban, so Ray and I had to squeeze in (my first time in a third-row of a big car, and it was a bit of a squeeze).  The drive through the Tennessee countryside was pleasant, and I loved the green hills covered with grass and hardwood trees, so different from our Washington State landscape.  The company, of course, was delightful, and it was great to get to know people we’d only known online.

When we got to Lynchburg, we parked in the visitor center lot, and went inside to see what we had to do before the tour started.  The visitor center itself was surrounded by green lawns and trees, making for a tranquil setting.  The Turmels took pictures outside. 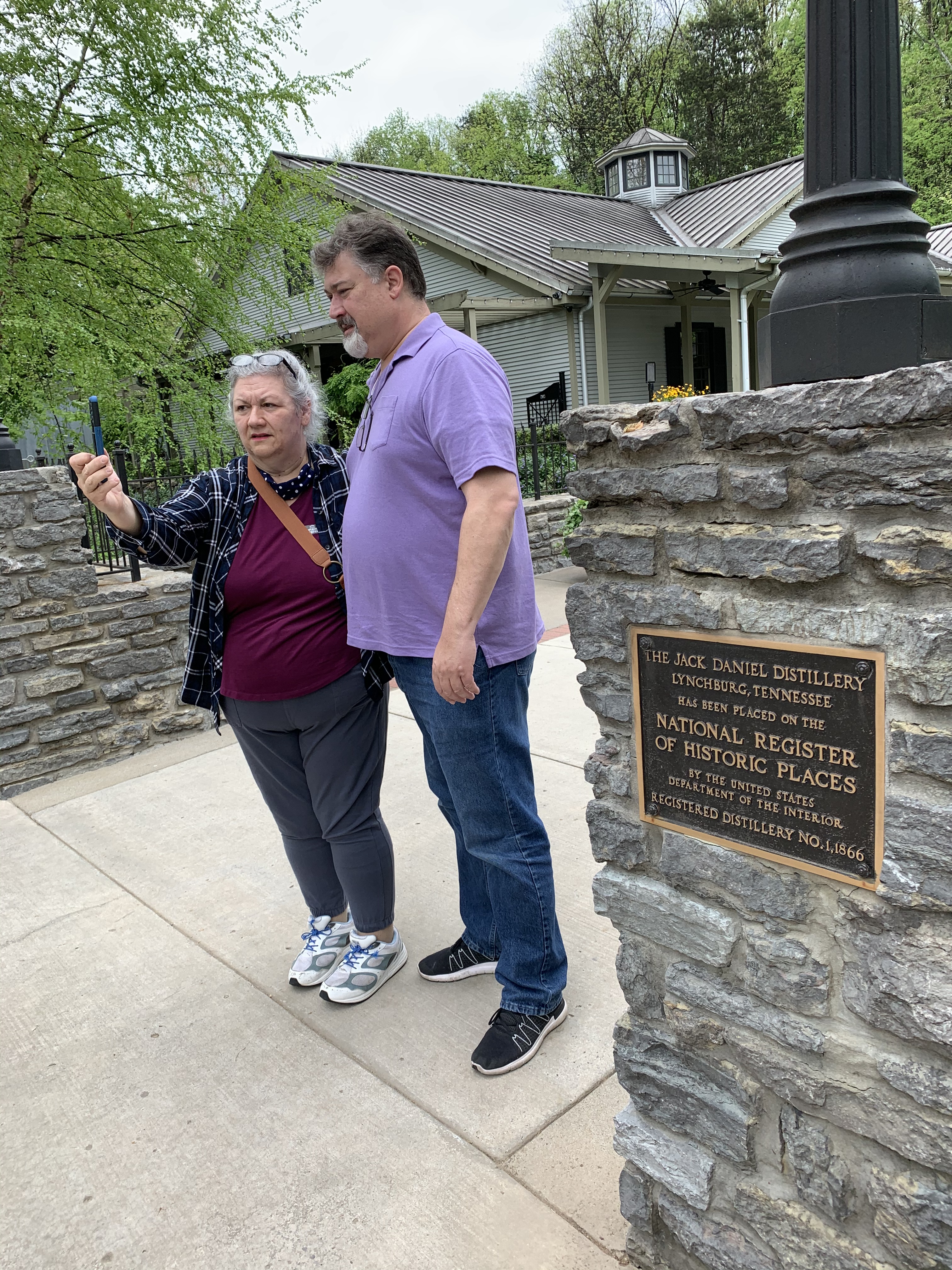 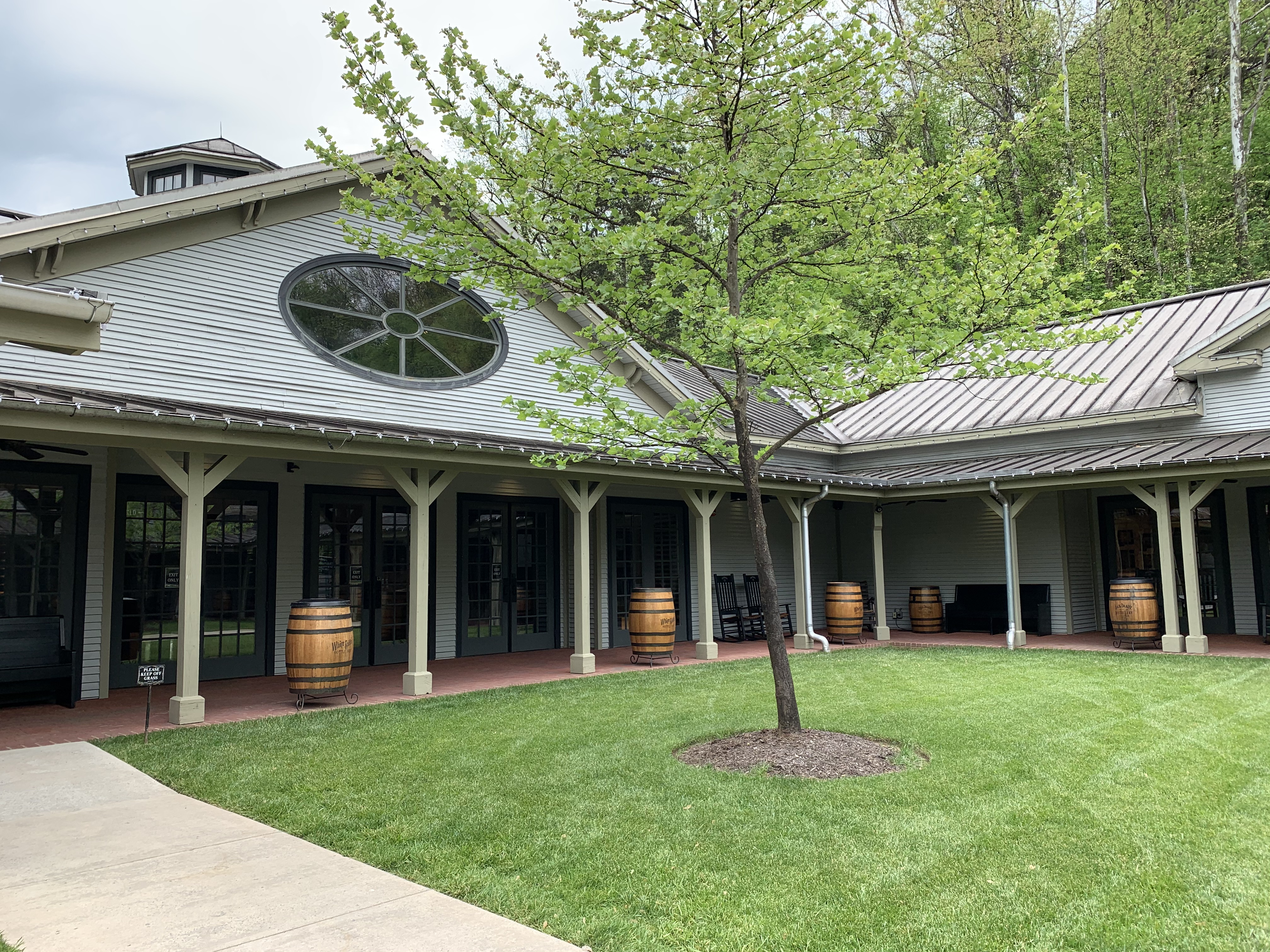 Of course, these days it’s not a trip without at least one “downer”, reminding us of all the awful threats outside and inside.  Ugh. 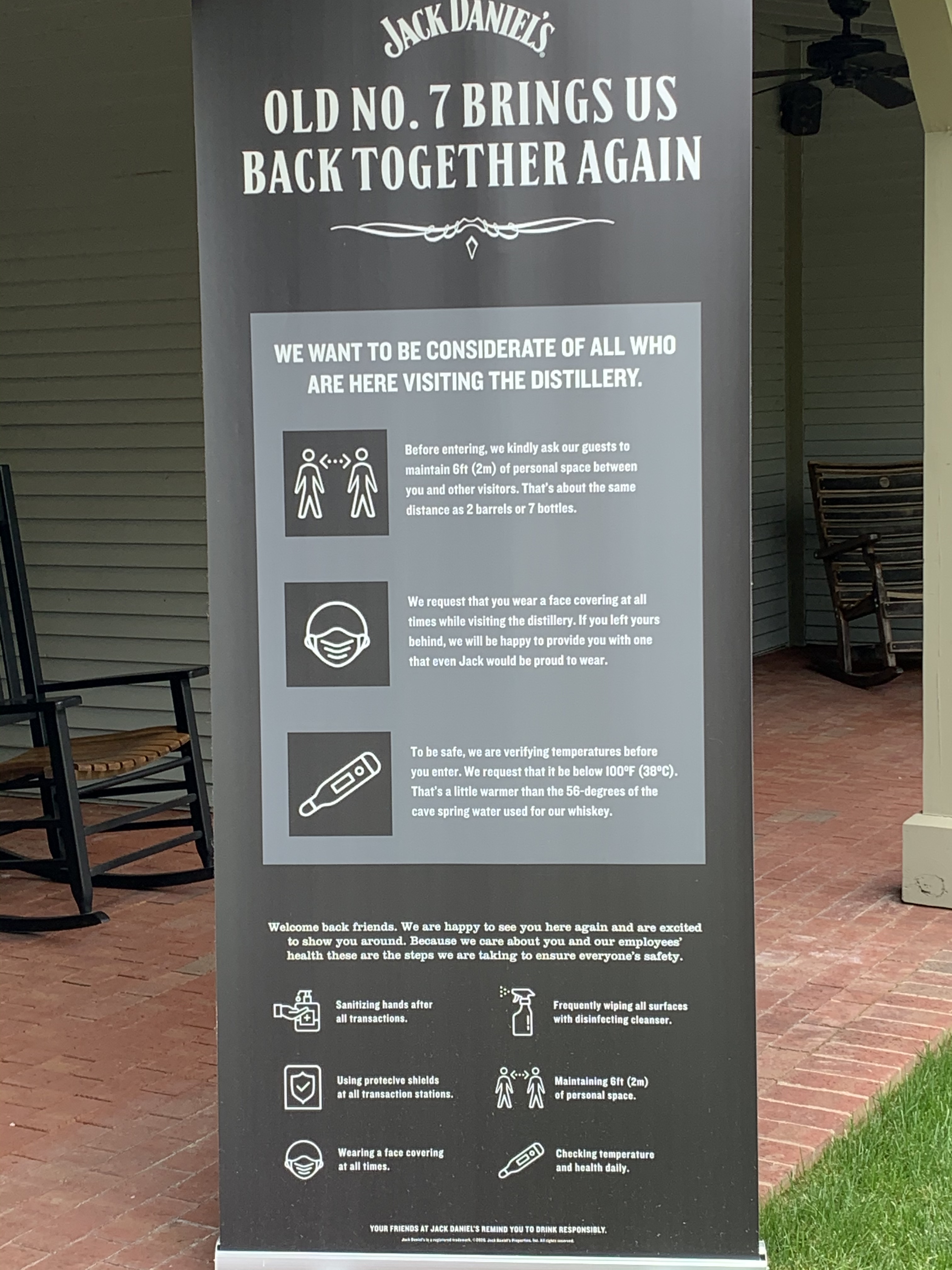 Once inside, there was much to see in the exhibits, while waiting for the rest of our party to arrive.  The area is well-known for its country music, and the visitor center reflected that! 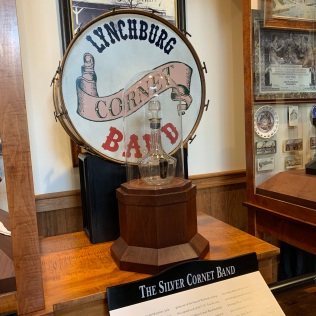 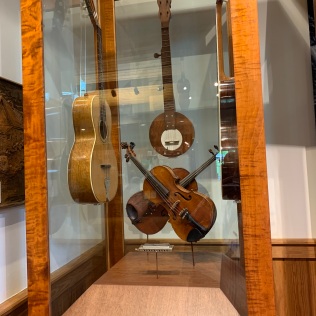 And, did you know that the county is a “dry” county?  The only place you can buy liquor is at the distillery, which makes it.  You can drink, but you have to buy your booze elsewhere.

There were other exhibits relating to the whiskey itself, of course. 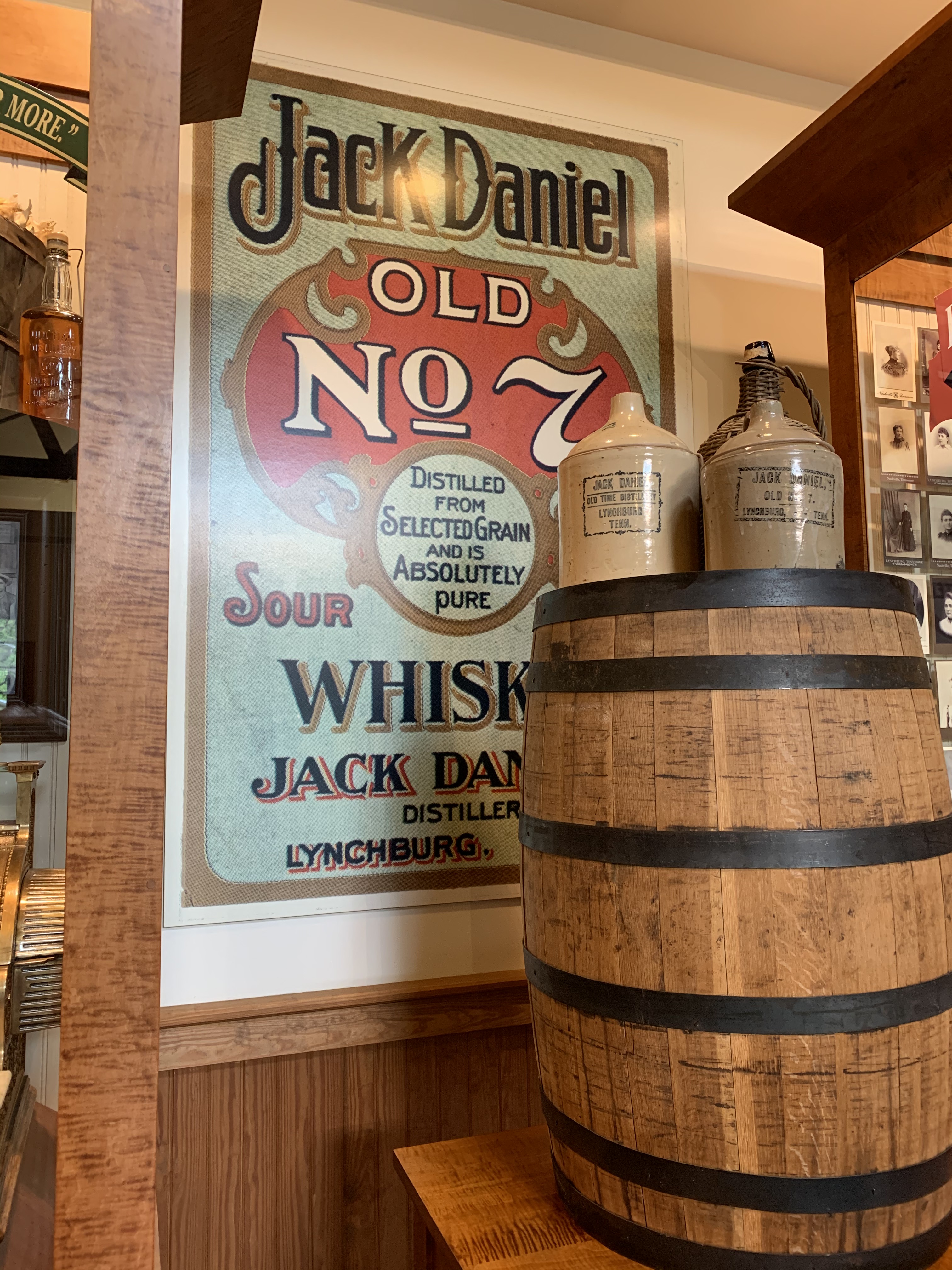 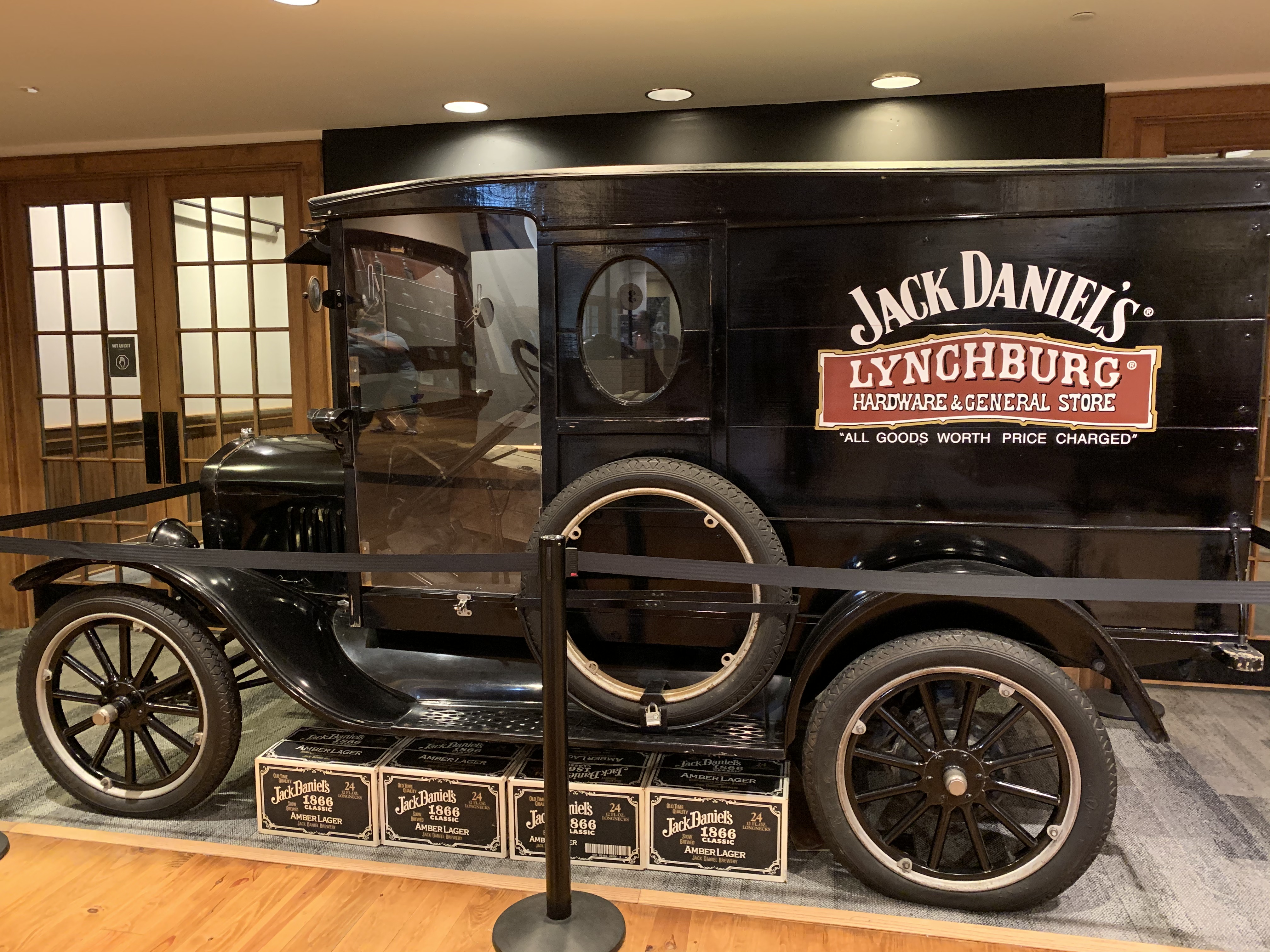 Once the rest of our party arrived, we met up with the tour guide, Ed, and started on the walking tour of the grounds.  The distillery is spread out over some hills, and a cave where the spring which provides the water is located.  It was a warm day, but cloudy.  First, we took a walk down a path surrounded by sugar-maple trees. 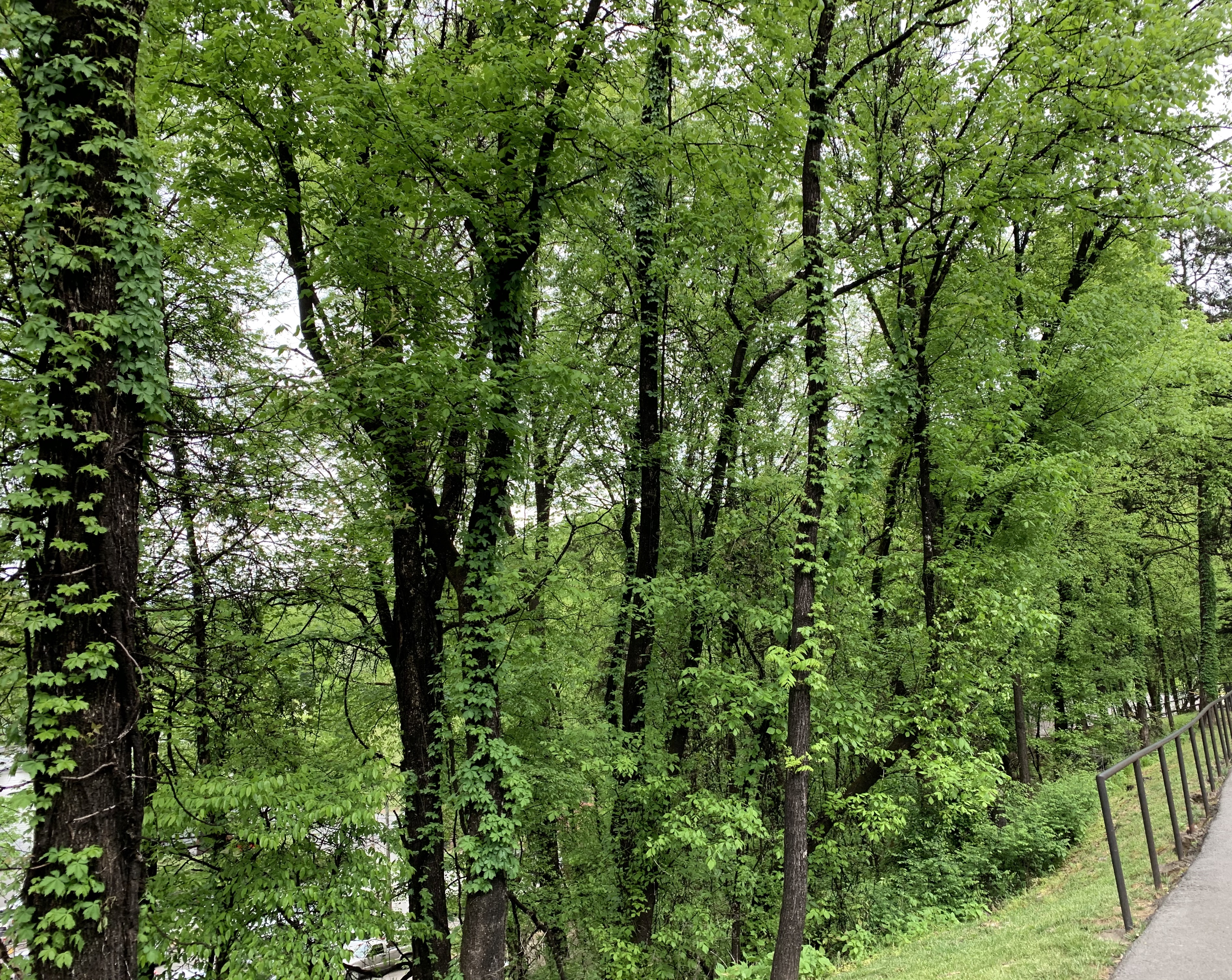 We asked why the trunks of the trees were blackened, and Ed told us that an organism in the air just happens to like the whiskey molecules floating around the place (too small for us to notice), and that helps them grow on the tree bark.

First, we visited the natural limestone cave, wherein dwells the spring which provides the water for the whiskey.  This spring has been flowing for over 100 years, and Ed said it shows no sign of slowing down. 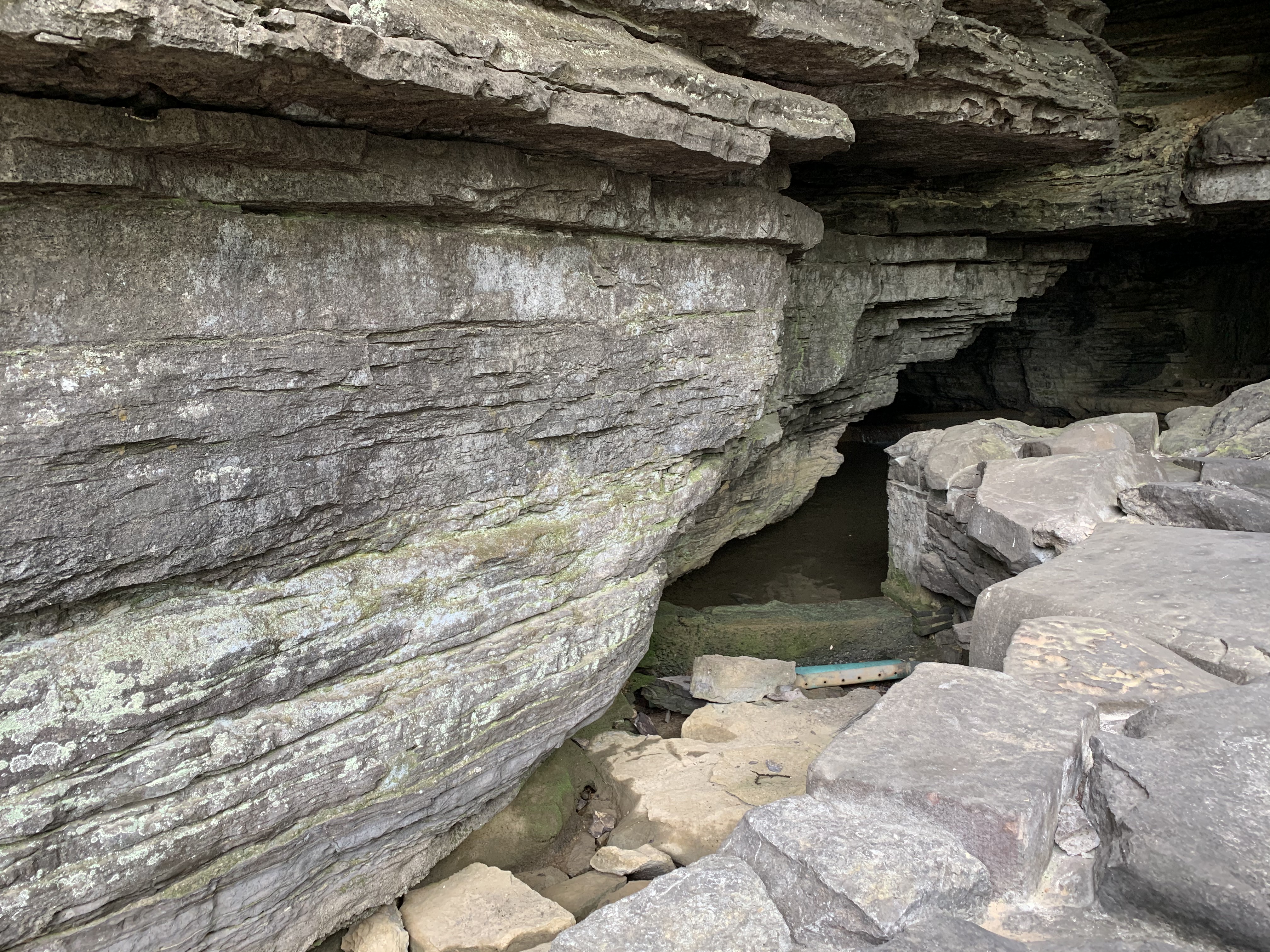 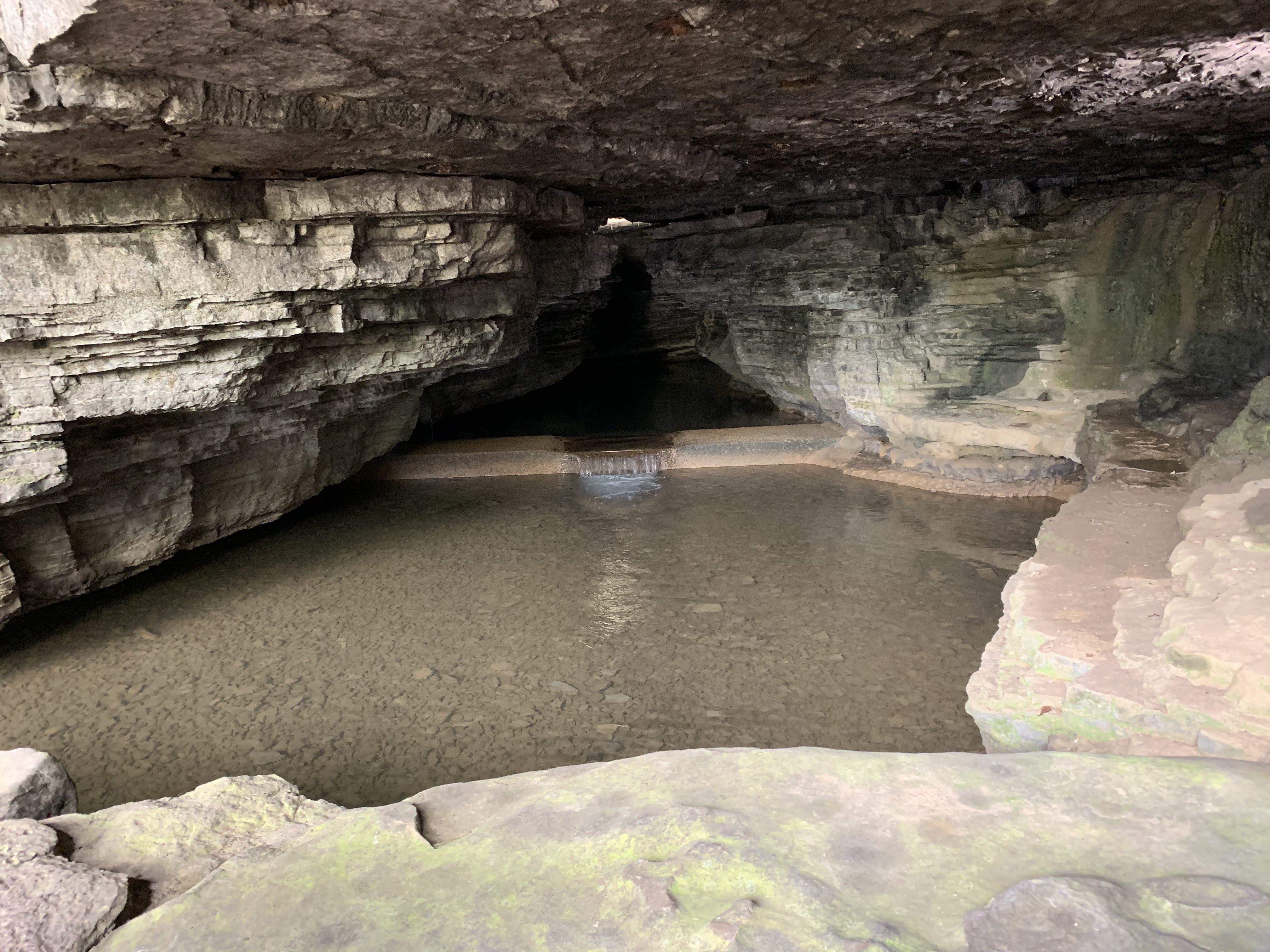 We were told that the sugar-maple trees have a purpose, shown by the next place visited, the rick yard.  It seems that Jack Daniels whiskey is made distinctive by its charcoal filtering process.  Those sugar maple trees are made into their special kind of charcoal, which adds smoothness and distinctive flavor to the whiskey. 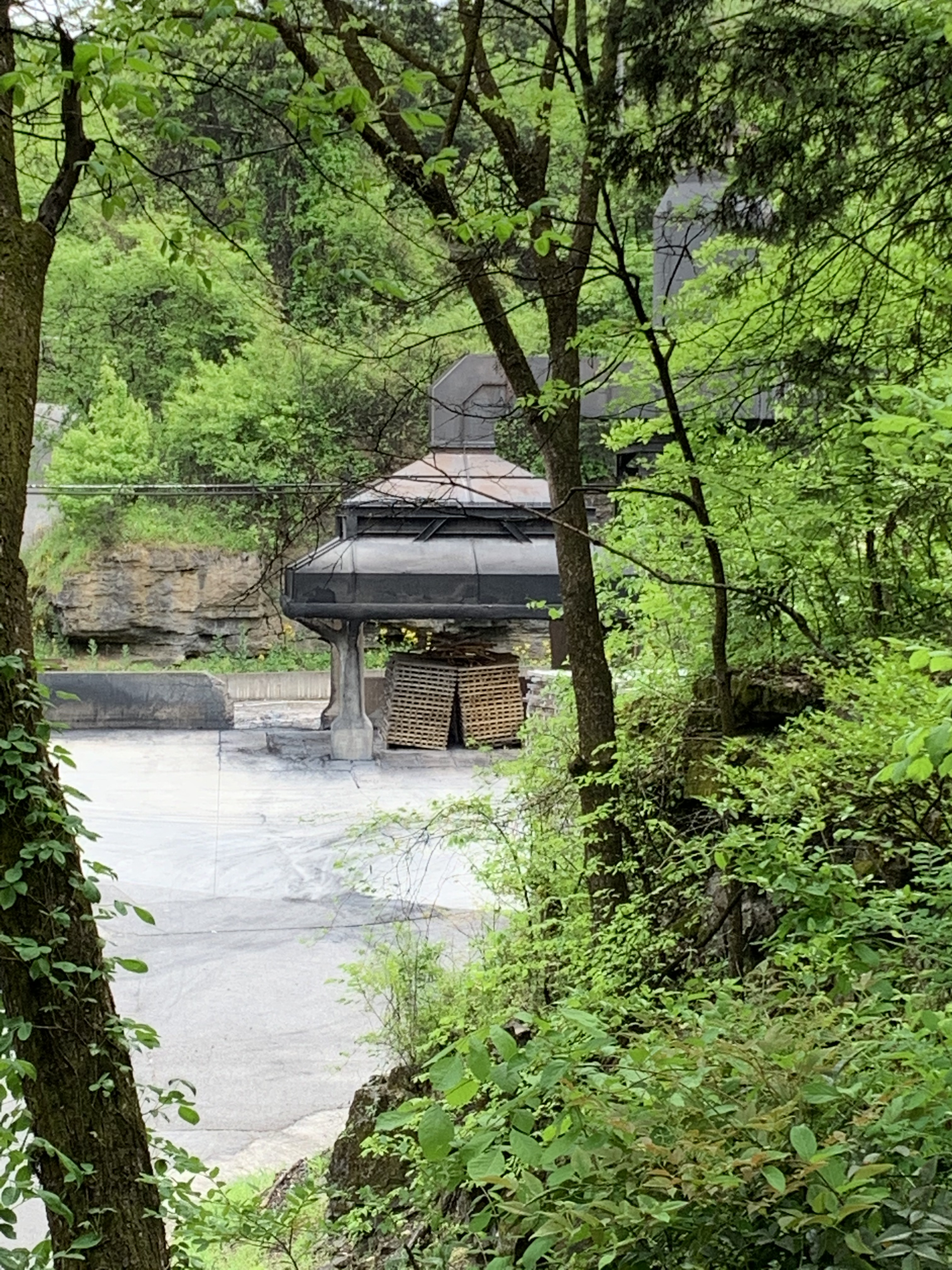 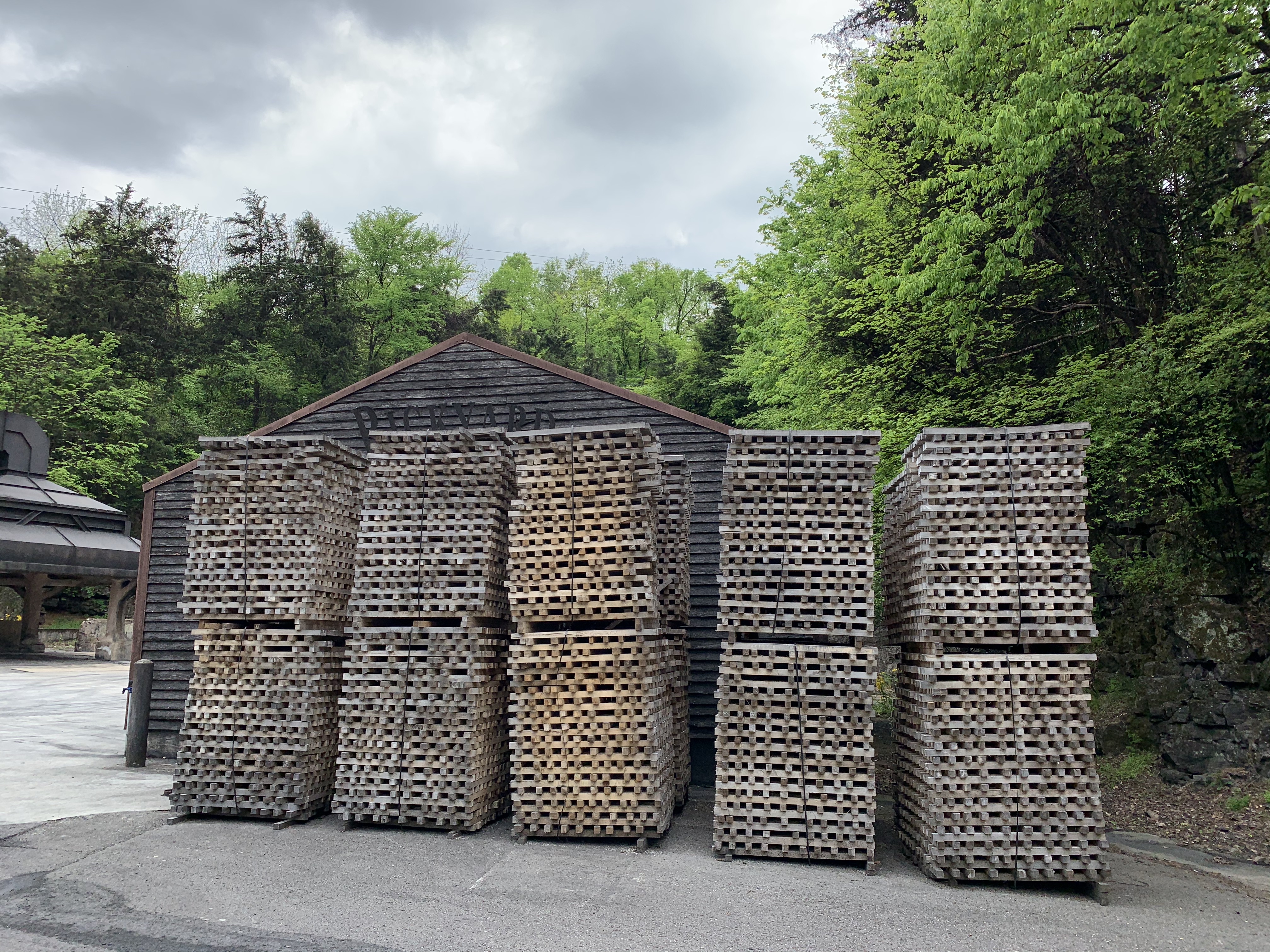 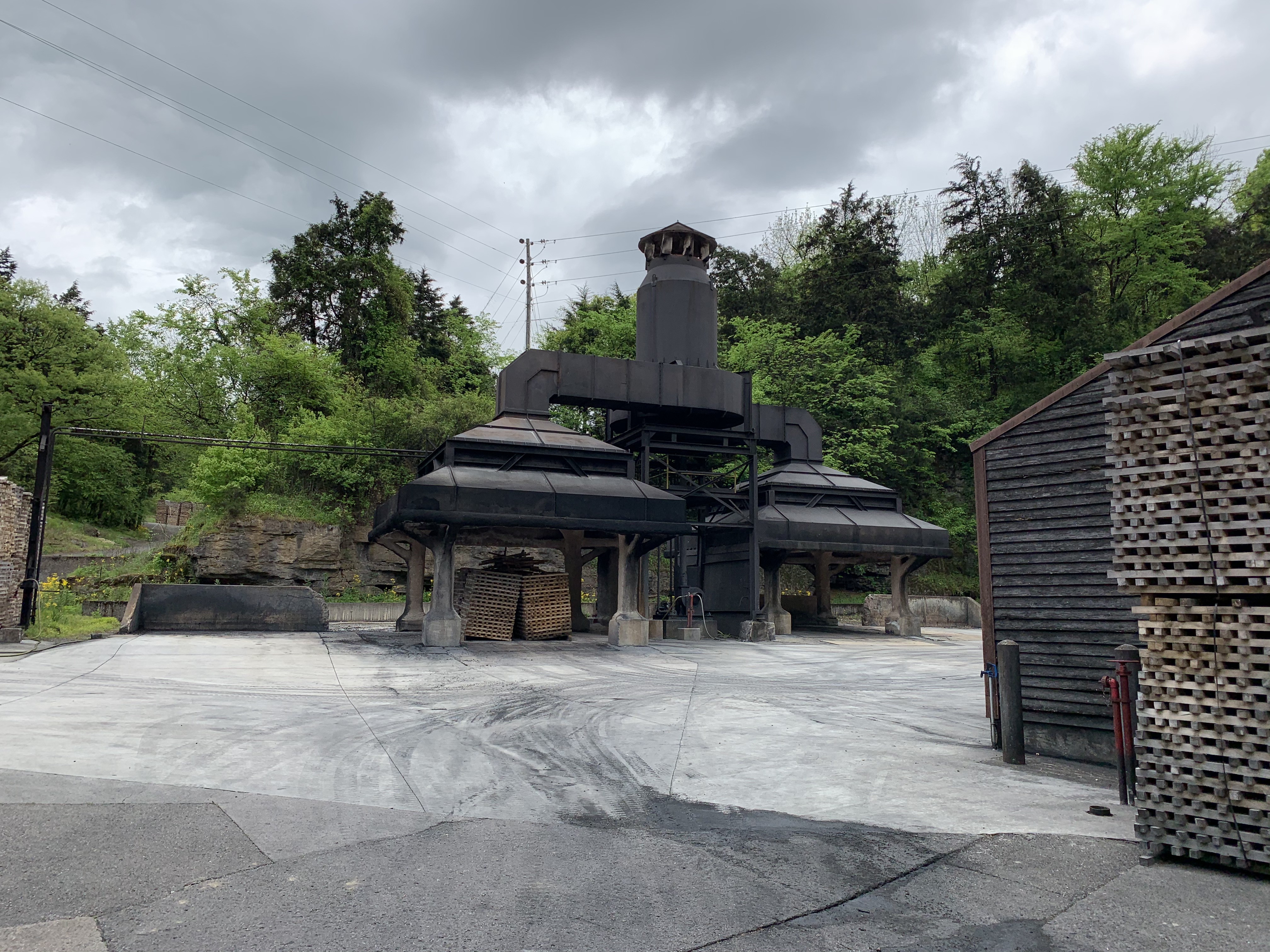 Every so often, those ricks are burned in a controlled manner, inside the structure above, watched very carefully by distillery staff, and made into their special kind of charcoal for the filters.  There wasn’t any burning going on that day.

Outside the cave entrance, near the old office, there is a statue of Jack Daniel, who in life was a pretty short guy.  Here he is, standing next to Ed, the tour guide. 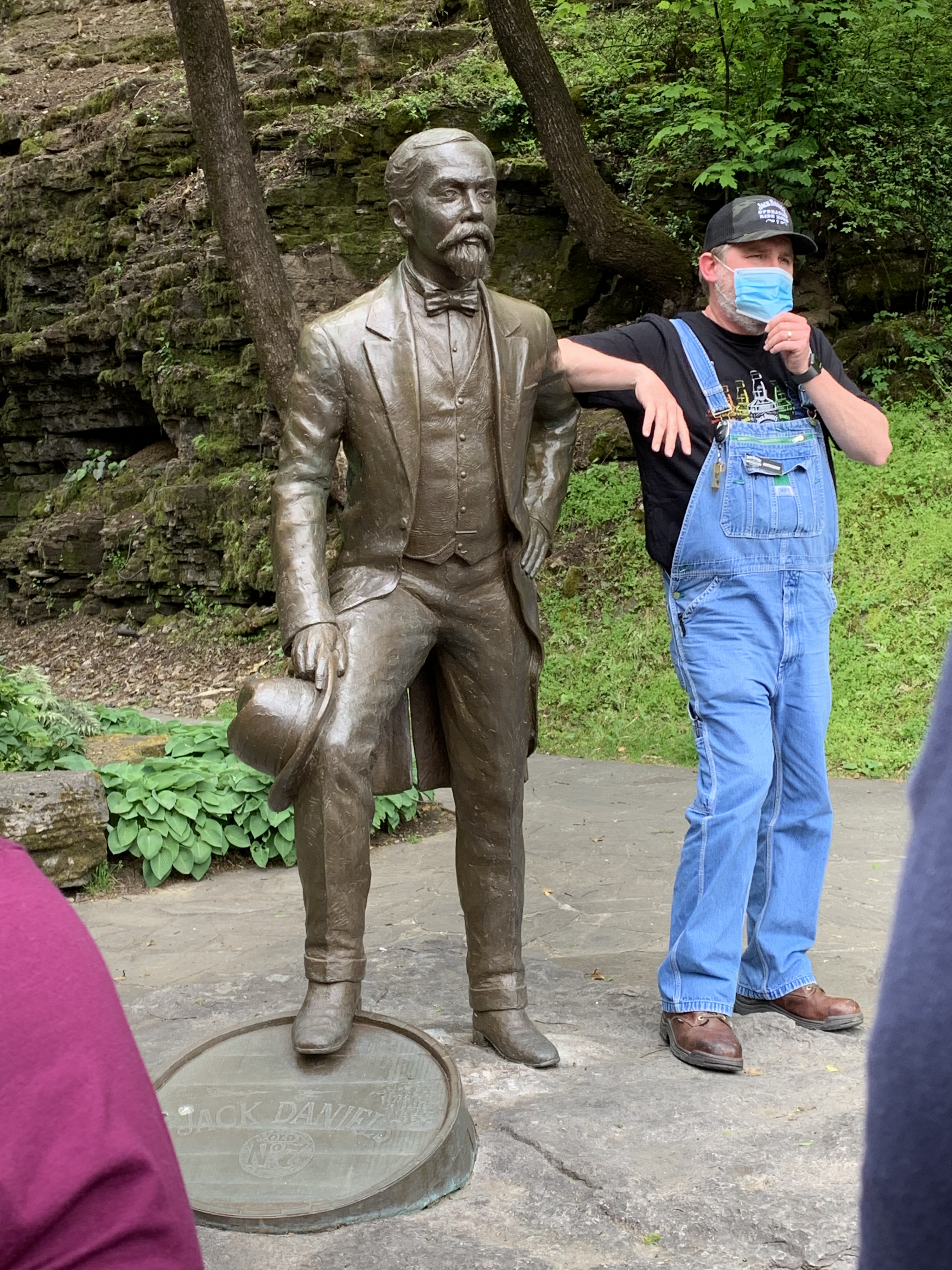 Next, we visited the original office that Jack Daniel occupied when he was alive.  It’s a nice little cottage, with the original furnishings, and a little exhibit of the raw materials used in the whiskey. 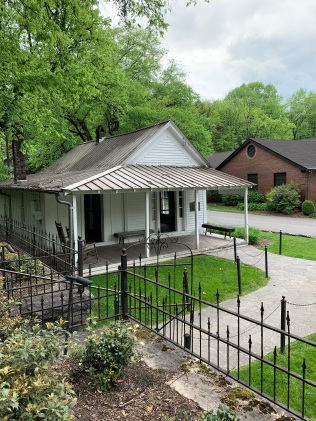 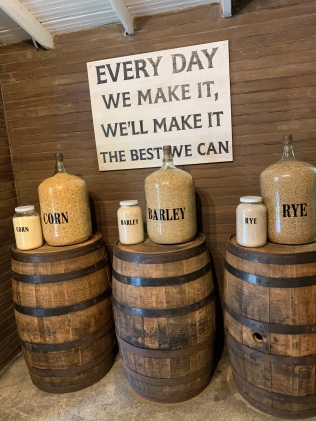 Next stop, still-house, but the grounds were also picture-perfect. 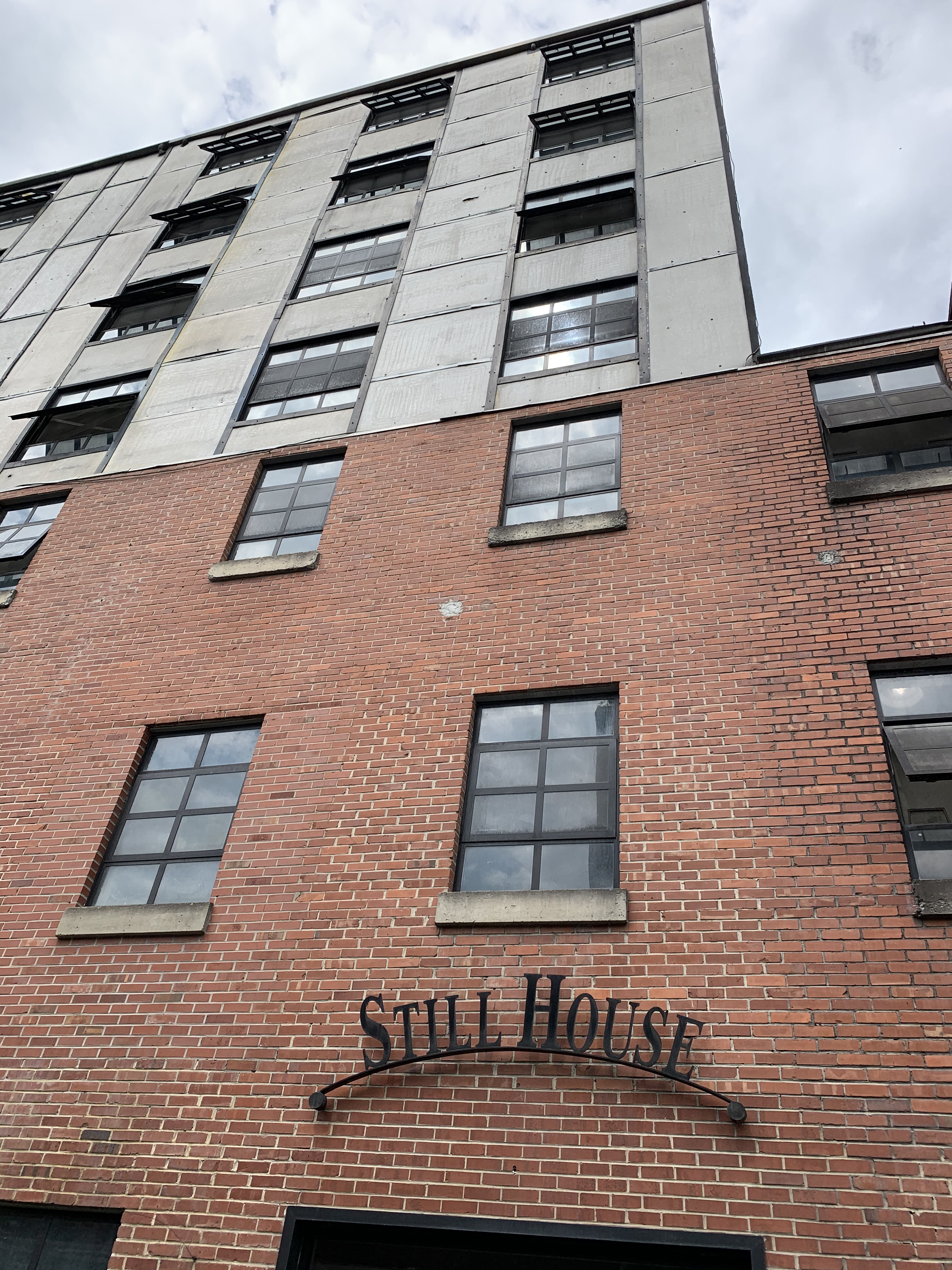 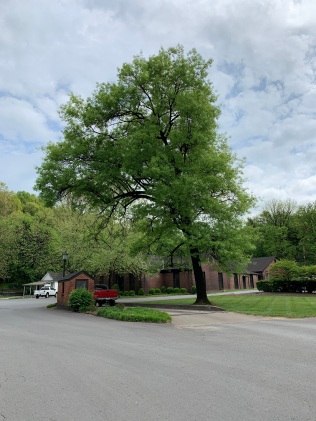 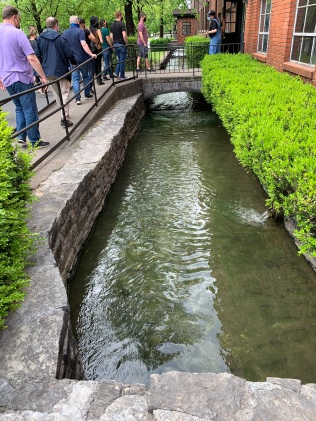 We climbed a very tall set of steps, and were shown the big filter-barrels full of charcoal, through which the whiskey is filtered, starting at the top of the building and working its way down through layers of charcoal.  The setup looks sort of like drip-irrigation like you have in your back yard.

The final part of the tour was the best part, at least for the whiskey drinkers in the group (which does not include me).  We walked into the barrel-room, where barrels are stored for aging, and sat down at little desks to taste the various kinds of whiskey.  Hubby tasted all five, and I gave everything a sniff and teensy taste. 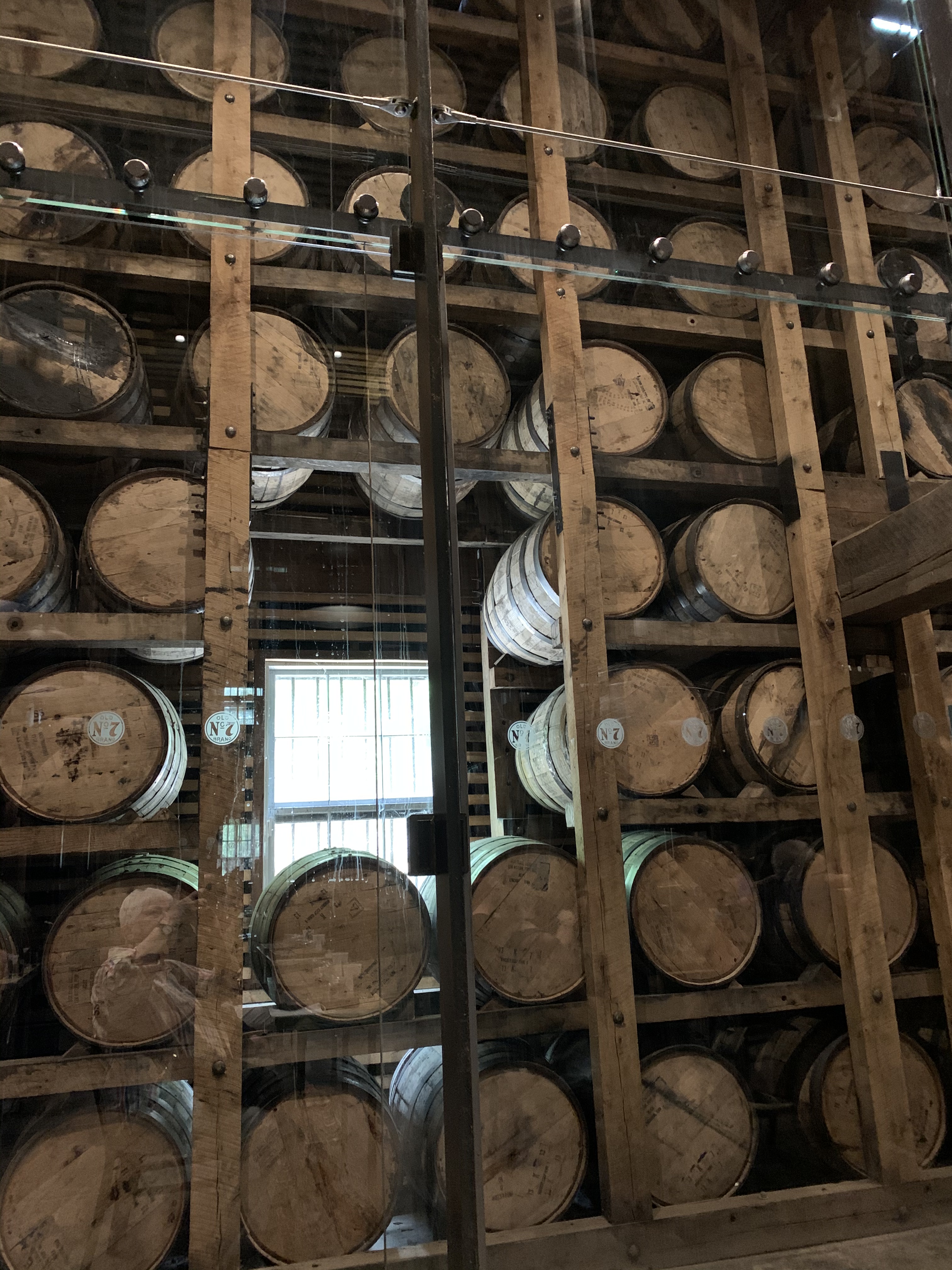 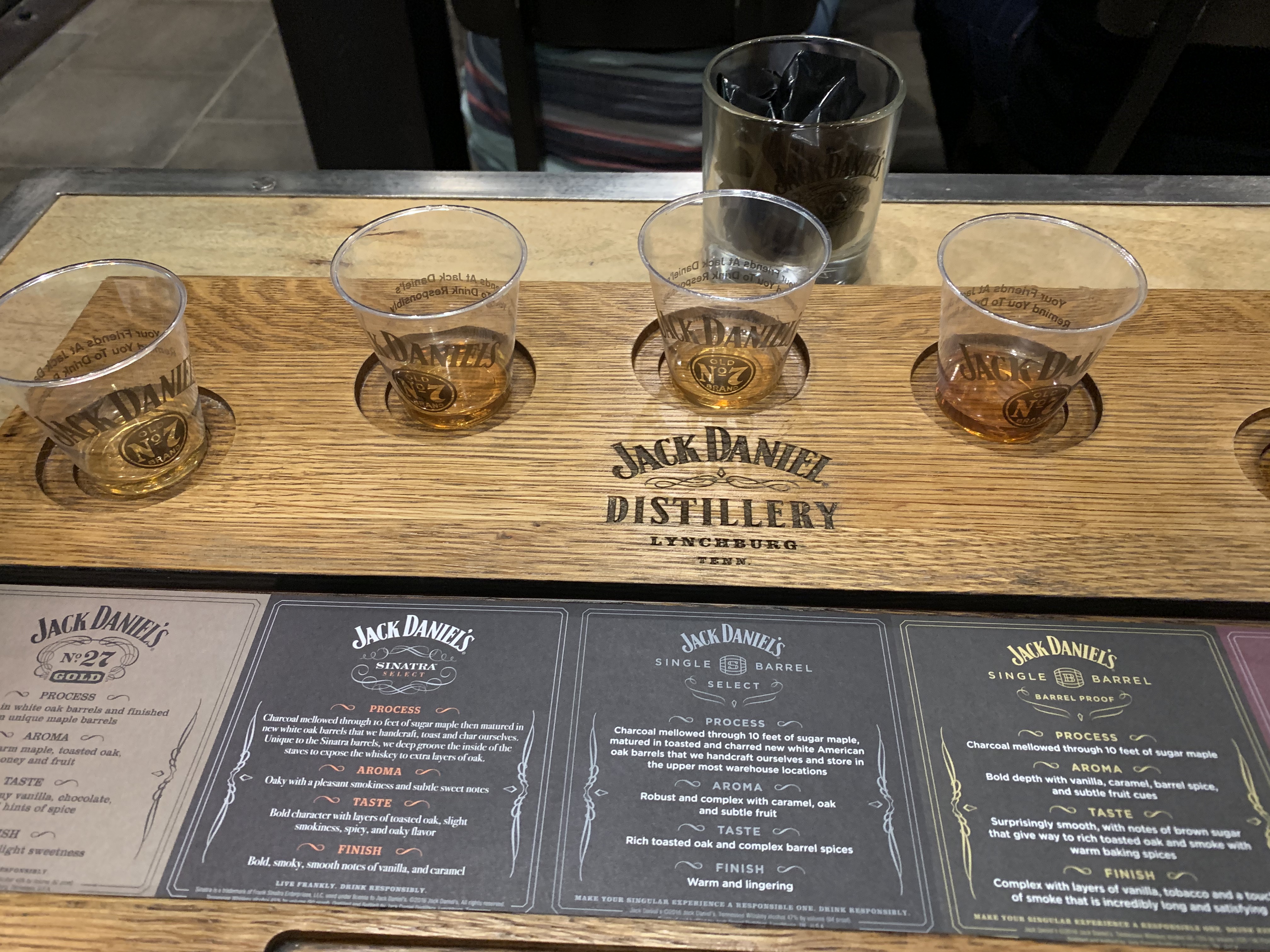 We were all given a glass to take home, and they will inspire many happy memories.

After the tour, we all piled back into Phil’s Suburban, and drove to the little downtown square in Lynchburg for some shopping and pictures.  Outside the general store where I bought shirts for myself and my friend who watches my cat, I found a sculpture of a man playing checkers, and I joined him. 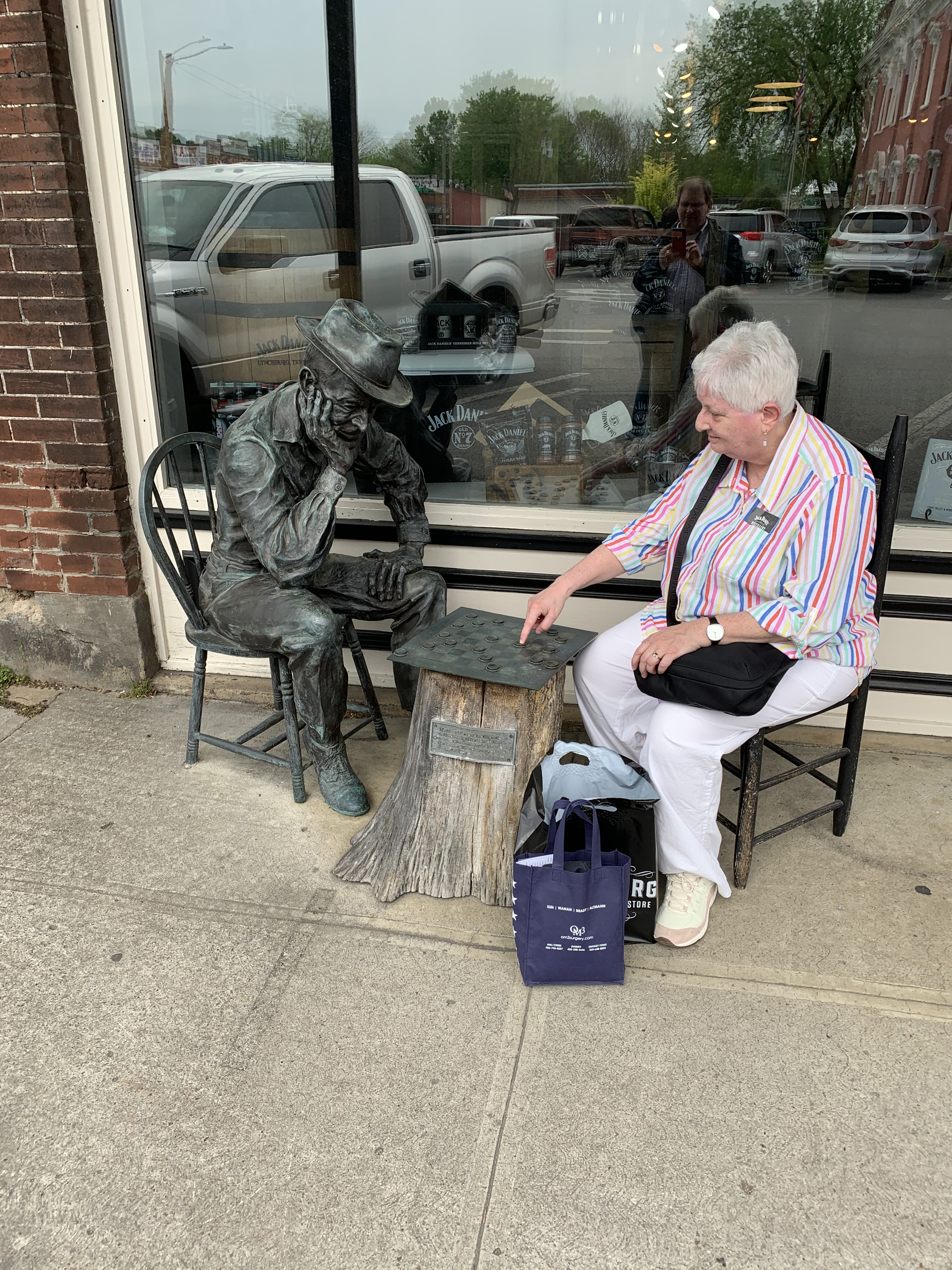 Across the street is the Courthouse, which dates from the 1800s.  A very pretty building. 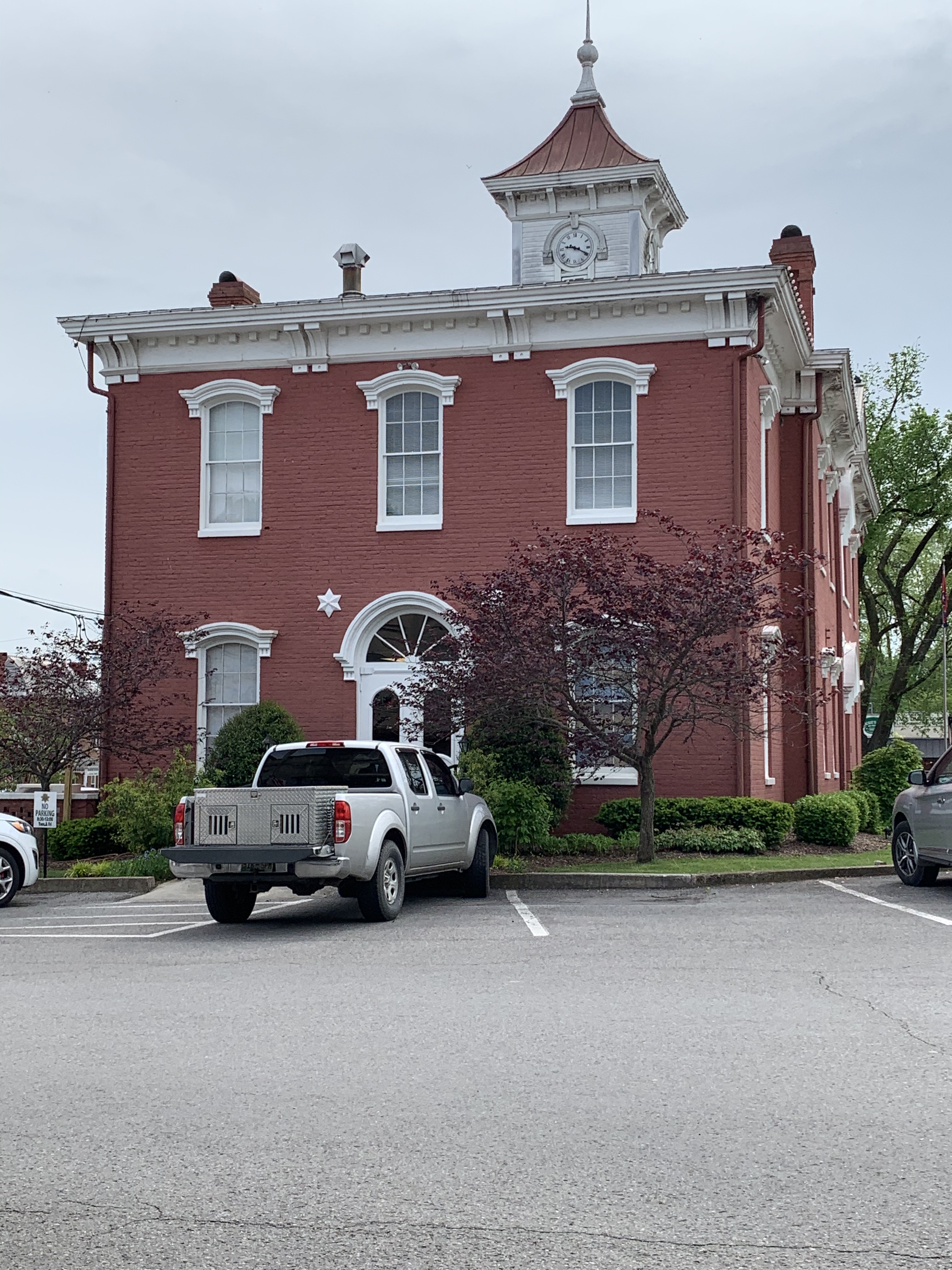 Next, we piled back into the Suburban for the trip home, so we could all change for dinner.  Again, I loved watching the countryside speed by. 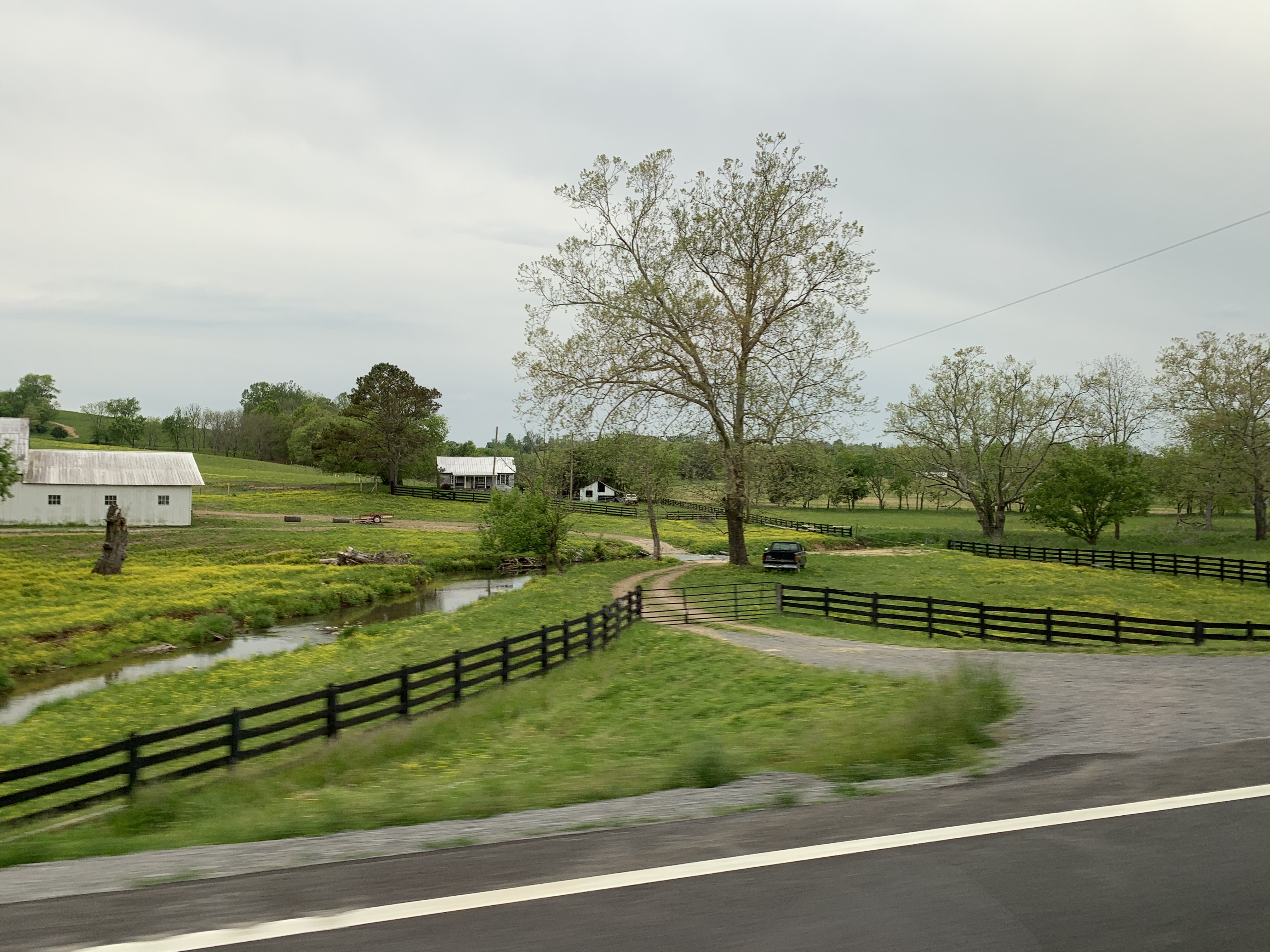 Our final meetup activity was dinner Wednesday night at Tupelo Honey, a southern-style restaurant not too far from the convention hotel.  We met our friends there, and had a wonderful dinner and the usual Ricochet excellent conversation. 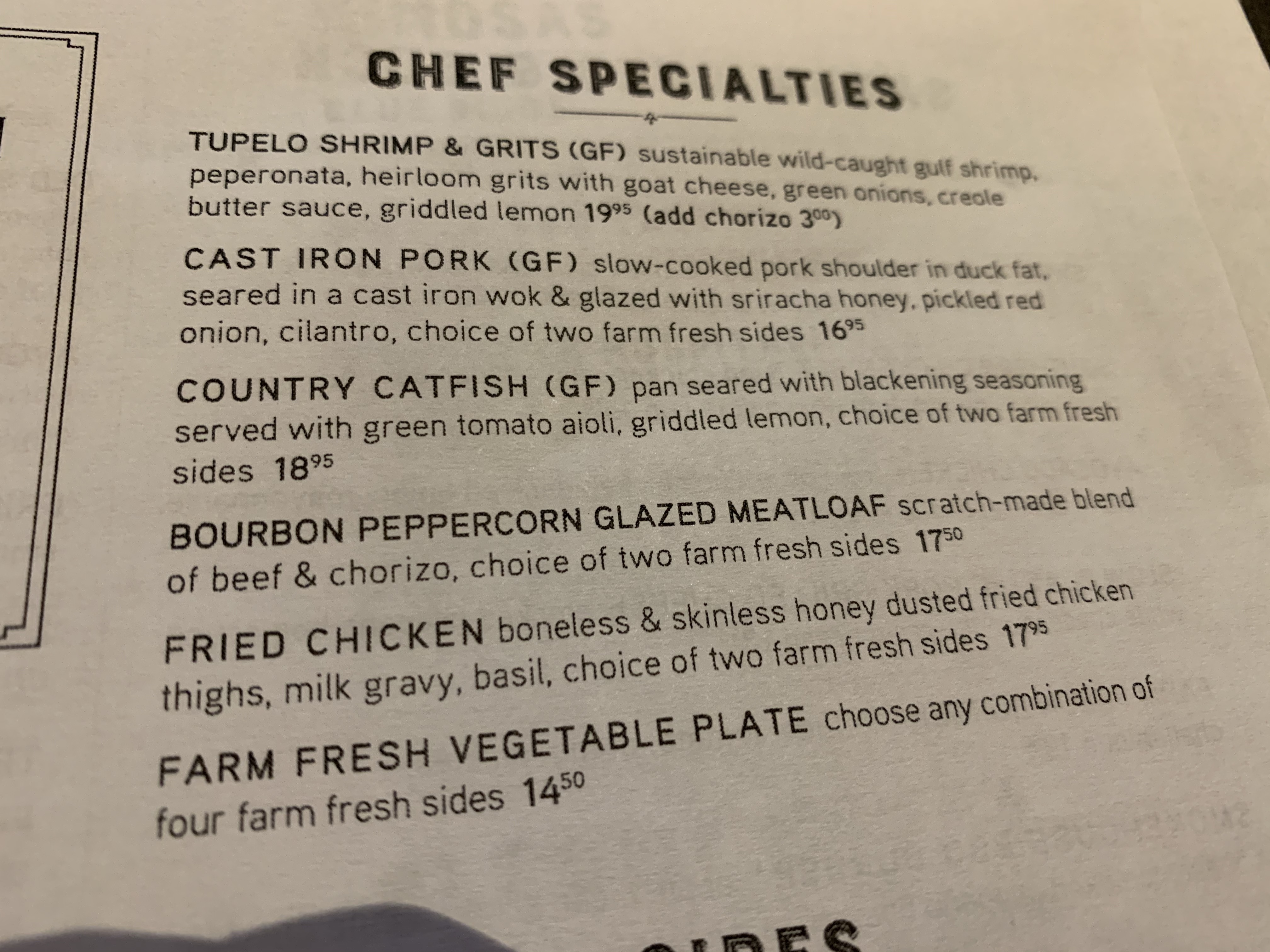 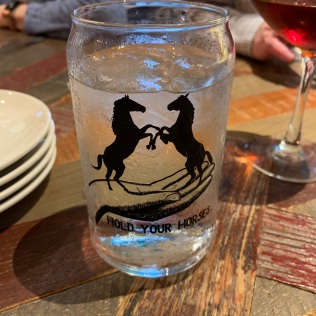 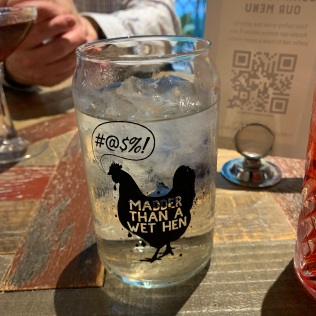 Funny glassware!  Nice people, too.  Liz and Robert Herring are both ex-military, with lots of stories.

Again, the “Stads”, who are always, always great company! 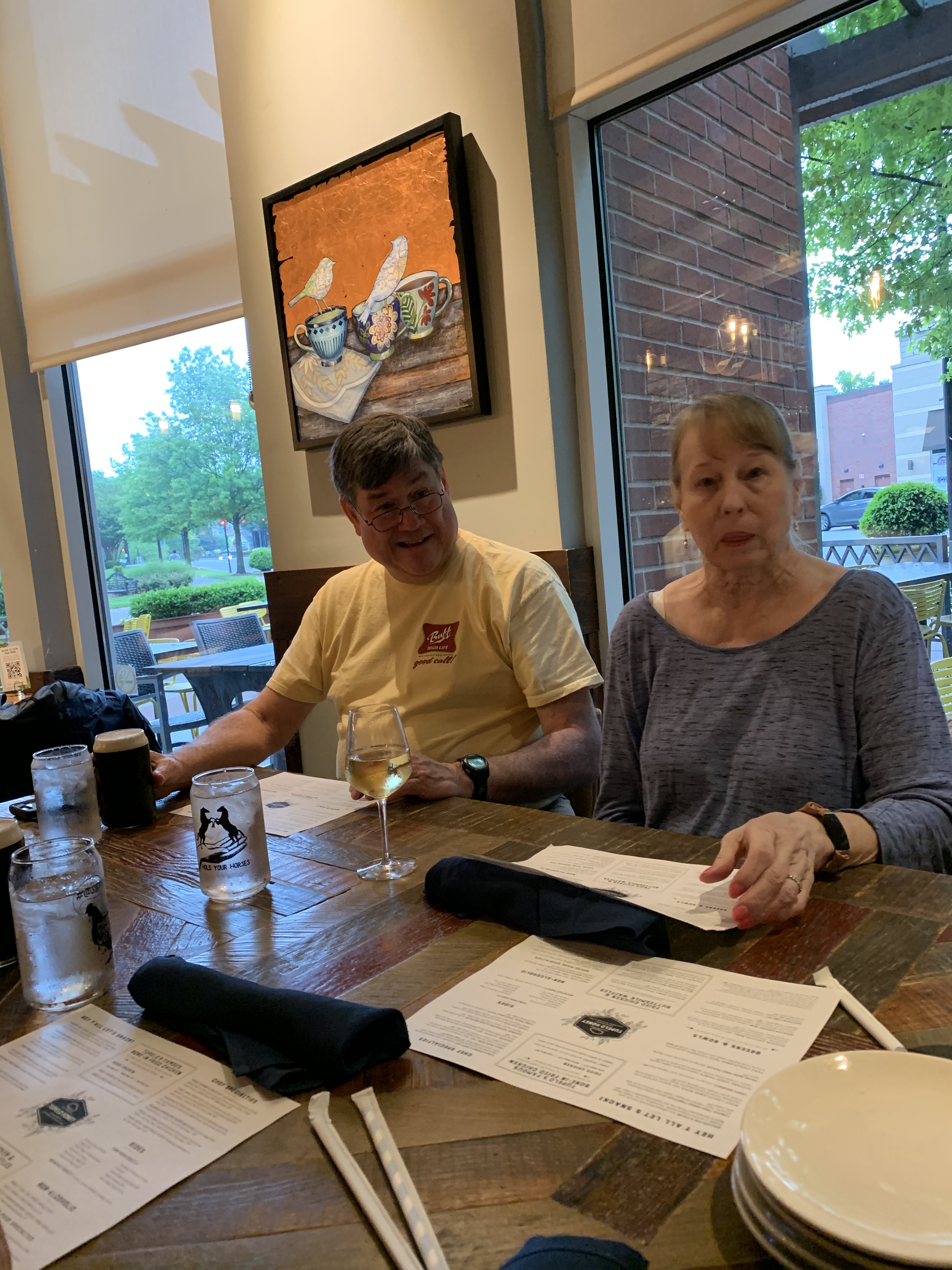 All in all, it was an absolutely great day.  Fun activities, good food, and the best conversation a Ricochet membership can buy.  And the best part?  Liberty!  No masks to prevent you from seeing and hearing your friends!

2 thoughts on “A big dose of Freedom (and whiskey): Nashville Ricochet Meetup”