Back in August of 2013, I wrote a post on this blog entitled “I do not understand “gay pride”.  Below is the entire post.

I stand by that sentiment today.  However, the issue is much larger and in-your-face today, given that the Supreme Court of the United States has ruled that all states must recognize and allow “same-sex marriage”.  The highest court in the land has changed the millennia-old definition of marriage to include people who are of the same sex, and therefore incapable of reproducing.  A long time ago, I read about a little “rule” to decide whether a course of action is good or bad.  Just imagine if everyone in the world did that action, would the effects be good or bad?  And in the past 20 years, homosexual behavior has become even more dangerous, with the advent of deadly sexually-transmitted diseases like AIDS.

It’s pretty easy to determine that if everyone in the world were homosexual, very soon there would be no humans left on Earth, since with no offspring the race dies very quickly.  The same pressure group that pushes “Pride”, has done everything it can to make the majority of the population of the United States acknowledge its perverted behaviors and lifestyle, and support their every action.  The vast homosexual lobby has sued Christian bakers, wedding photographers and venues, and florists, to make them essentially participate in rituals that violate their most deeply-held values.  The vast homosexual lobby has promoted “anti-discrimination” statutes that lead to the shuttering of religious adoption agencies, who refuse to place children in homosexual households.  Just found this:

About a year ago, my husband and I became regular viewers of the Church Militant news, and they were very informative about the destruction that is being wrought on the Catholic Church by their large number of homosexual priests and archbishops.  We have learned about the German Catholic “Synodal” movement, which has promoted homosexuality in the priesthood, and drawn the German Catholics away from millennia-old Church doctrine.  A schism is in the making there.

Update in 2022:  I applied recently for a buyer job at a local electrical contractor, through LinkedIn, where I had seen the opening publicized.  Their “easy apply” service does not admit of a “cover letter”, so all the hiring company saw was my profile and resume.  Just this week, that company published on LinkedIn an article in support of “Pride Month”.  I know the company read my application.  If they ever call and want an interview, I plan to decline, since I am not interested in working for a company which supports the evil of “Homosexual Pride”.  Besides, “Pride goeth before a fall”.

On my shopping trip today, I spotted these at the bakery counter. 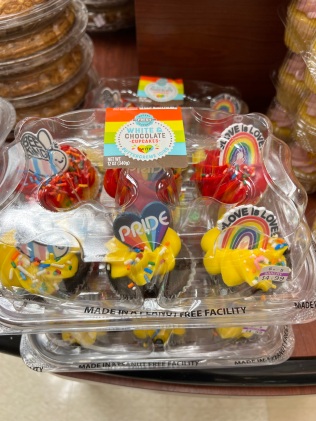 Sorry, Lavender Mafia, and Homosexual Lobby, there will be no “pride” here.  We also do not use the euphemism “gay” to describe homosexual individuals.  We do not believe in promoting a lifestyle which, pursued to its logical endpoint, would mean the end of Humanity.