First of all, I would like to thank President Donald Trump for appointing three of the six Justices who voted to overturn the 1970s case that found a “right to privacy” in the Constitution where it did not, and does not, exist.  The hysterical Left, for whom abortion is their Holy Sacrament, were losing their minds, and asserting that the decision will lead to a banning of abortion everywhere.  Of course, they cannot allow that to happen.  Note the header photo, from MoveOn dot org.

What the Dobbs decision (a Mississippi case against a law that bans abortions after the 15th week of pregnancy) really does is return the abortion debate to the “several States”.  Now, every state in the Union can pass whatever laws they see fit, to regulate abortion.  It means that blue states like Washington and New York can pass laws allowing abortion at any time, for any reason;  New York already does this, and Washington requires all medical insurance sold within the state to cover abortion.  The ruling also allows states to ban abortion completely, or regulate who can provide abortions, where, and when.  It means that residents of the states can appeal to their own elected legislatures to continue their current practices regarding abortion, or change the state laws.  Here are some stories today.

On Ricochet.com, Editor Jon Gabriel comments, and the Members also comment.  I urge all my followers to dig into your pockets and join Ricochet.  You will not regret it.

From Erick Erickson, on his Show Notes.

Over at PowerLine Blog.

So, that’s a sample of the sane people in our country.  Now, a little sample of the insane Left, wailing and gnashing their teeth.  Remember, abortion is the Holy Sacrament of the Left.

As expected, Seattle is on the way to declaring itself an “abortion sanctuary city”.

And King County Executive Dow Constantine pledges $1 million to support abortion access in the Pacific Northwest.  I wonder how the few conservatives left in King County like the way their tax dollars will be used.

From NPR, your tax dollars at work.

Courtesy of TownHall, it appears that a Congress-Critter from the People’s State of California has issued a call for insurrection!  Just like Maxine Waters, who every time she opens her mouth demonstrates her idiocy.

Unfortunately, the hysterical Leftist Domestic Terrorists have already unleashed their terror campaign against the Catholic Church and local “crisis pregnancy centers”.  They have burned, vandalized, and mobbed these institutions, and they vow “nights of rage” to demonstrate their love for abortion.  Believe their words, and their signs. 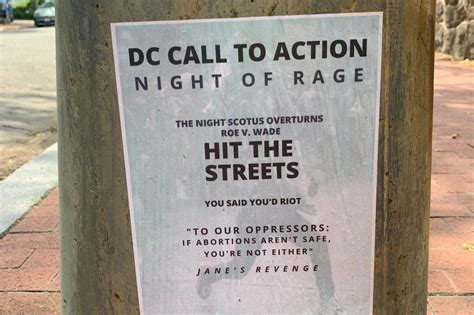 Truly, the Left is a Death Cult, whose minions abort thousands of black babies every year.  Like this:

Here are some stories about the domestic terrorism already happening.

And some images.  This is what they are doing, and will do, to silence those of us who wish to protect human life.

Yes, the above is who they are.  And the lawmakers that the Left elected have ignored or pooh-poohed all the destruction of the days of rage that have already occurred.  Mark my words, many more churches and crisis pregnancy centers will be targeted for destruction by the Death Cult of Abortion, and the Feds will turn a blind eye, because they are in support.