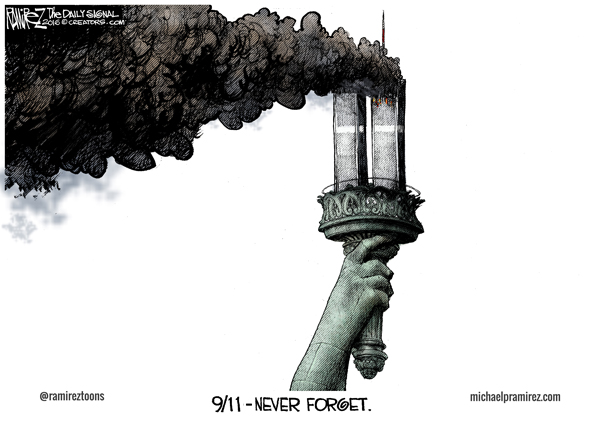 On that day, worldwide Radical Islam escalated the ongoing war on the United States of America (and the rest of Western civilization), the nation that has been a beacon of hope and prosperity for over 250 years.  For the past eight years, we have ignored that war, and turned our backs on Christians and Jews everywhere who have been murdered in the streets of Paris and Jerusalem, and even in their beds.  And the current administration undermines the USA, freeing dozens of terrorists from Guantanamo to return to the jihad they wage against us.

We must never forget those who perished on September 11, 2001, in New York, Washington D.C., and Pennsylvania.  May their lives not have been in vain.

And a big Thank You to Michael Ramirez, whose work honors them, and us.