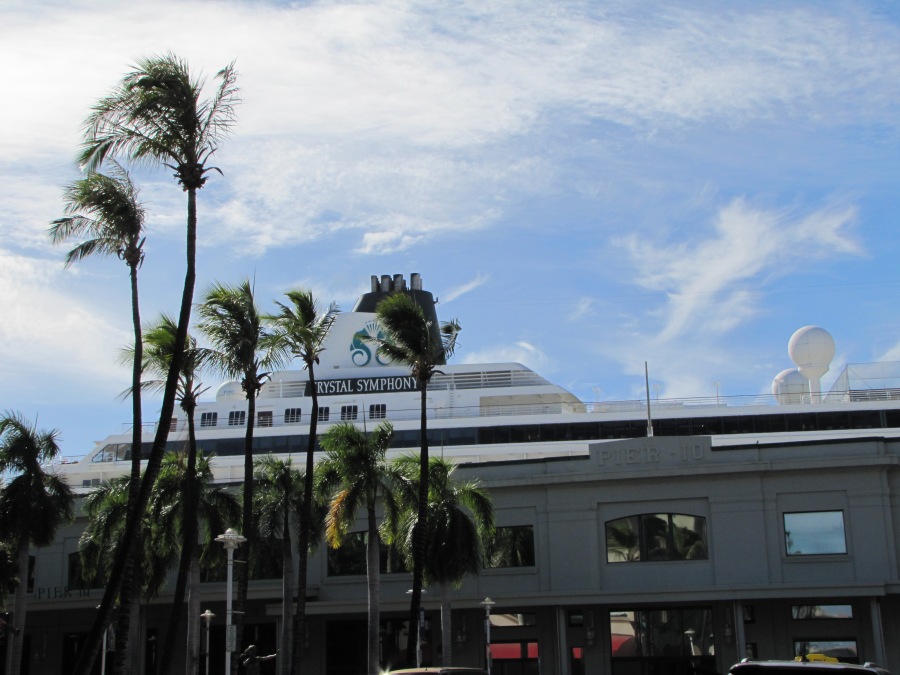 After the thrilling volcano-viewing session, a nice dinner, and a good night’s sleep, we arrived at our last Hawaii stop, the town of Kailua-Kona.  Again, the Crystal Symphony had to “anchor out” in the harbor, and we were ferried in on the ship’s tenders.  It was only a 15-minute ride, and we got a good view of the other vessels.  On these trips, passengers and speakers rode together and got a glimpse of famous people dressed-down. 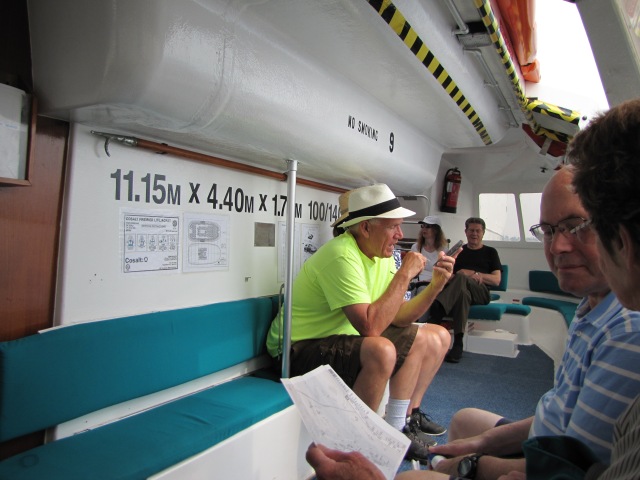 Seen from the dock on shore, there’s the Symphony and one of the other tenders, which shuttled back and forth all during the day.  Here’s what we encountered after getting off the tender.

Now that’s Hawaii!  Those outrigger canoes were available for rental right at the dock.  Also right at the dock were some very Hawaiian businesses.  I got the biggest kick out of this shop.  I wonder what distinguishes “gourmet” from “ordinary” Hawaiian Shave Ice?

My husband just had to try real Kona Coffee, so we went into the shop next door.  Another sign that just caught my fancy.  We don’t have kids, but I wonder if parents would find this funny.  I sure did.

From the dock, we took a walk through town, just seeing the sights and peeking into the various shops.  We found a little outdoor mall, which had a very interesting fountain in the middle.  It featured some exotic plants, and some interesting animals too. 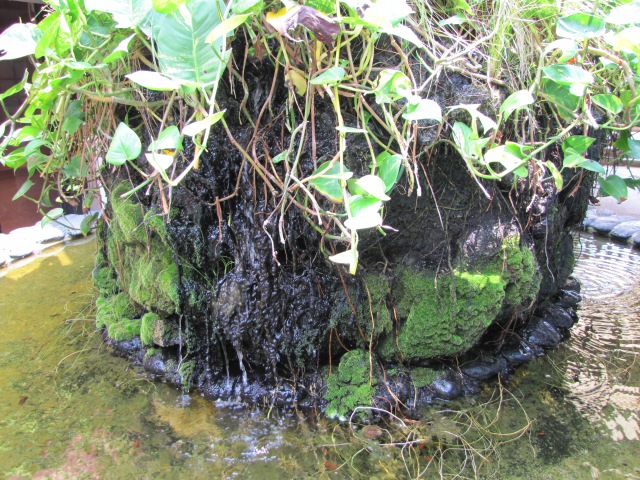 I thought those mosses were so beautiful, with the rivulets of water cascading down. 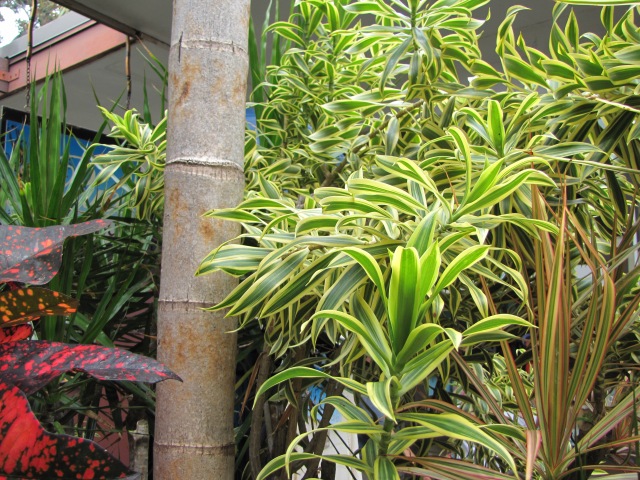 Now, see that tree trunk?  I moved around to the left, and used the zoom setting on my camera, and what I saw was quite remarkable.

I spotted both the little green lizard on the left, and the big snail on the right very quickly.  Hubby had to be shown the snail!  I was fortunate to get them both in the picture before the lizard moved, and he was standing very still.

We headed down the street, and passed this landmark.

I don’t know, that doesn’t look like much of a palace to me, but it was in its day.

We (well, I anyway) did some shopping, and on our way back to the dock, we found a little beach, in back of a motel in town.  This beach had some beautiful volcanic rocks, and a nice view of the harbor and the incoming surf.  No surfers, however, since the beach was way too rocky!

On a pretty gray day, that wave looked awfully blue!  And see the kite-surfer on the horizon?  We seemed to see them at every port we visited in Hawaii, though this one stayed pretty far from shore, for obvious reasons.  I did like the volcanic rocks, which showed the makeup of the terrain on this island. 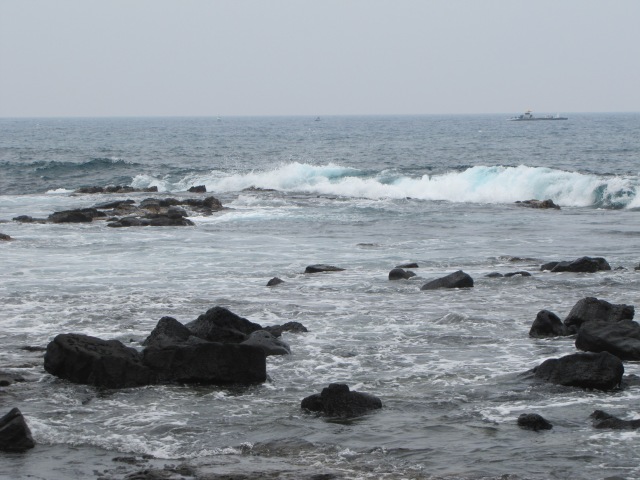 We walked as far as we could on the beach walk, then headed back toward the street.  I did enjoy viewing all the varieties of plant life in Hawaii, many of which were brightly-colored.  These flowers grew on the motel property. 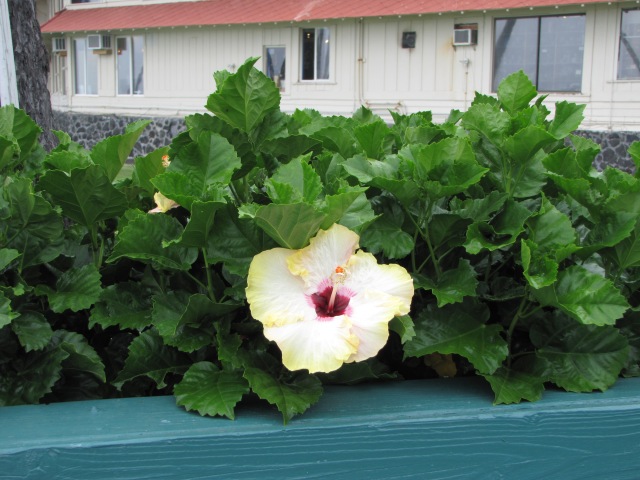 I thought this tree-trunk looked a bit like an elephant.  I wonder why? 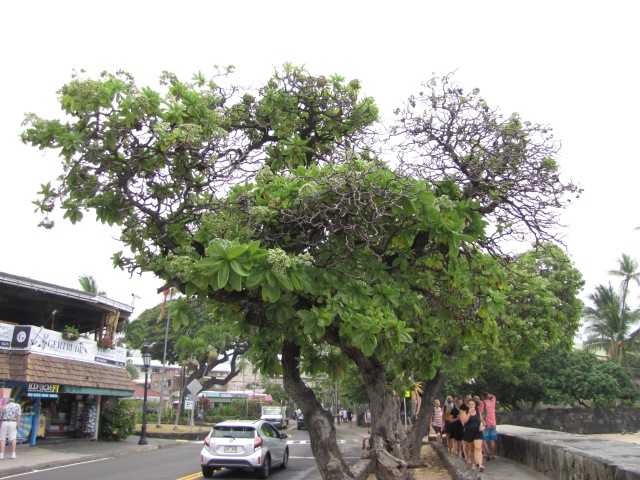 I really liked the twisted branches of this tree.  I zoomed in on it to capture the smaller branches.  Can you see the bird in this photo?  Even I had to look more than once to see what I had captured!  And I don’t know what kind of bird it was.

We took the tender back to the ship, and while en route saw this. 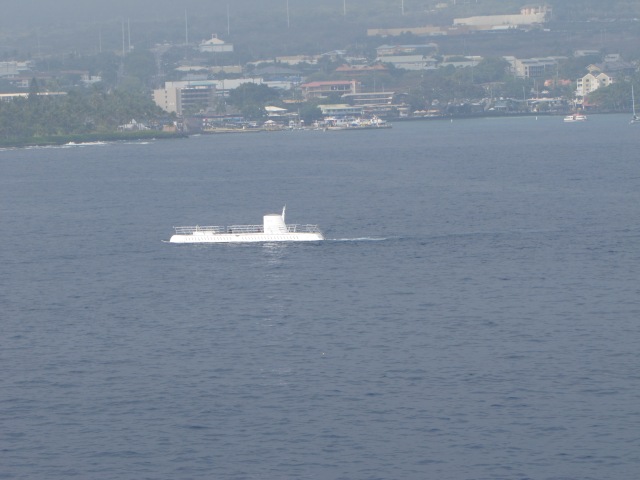 That is a little half-submarine, which took tourists out to see what is beneath the waves.  We went back aboard the Symphony, and left harbor around 6:00PM.  From this shot from the ship’s deck, it looks like the trip home might be a bit choppy. 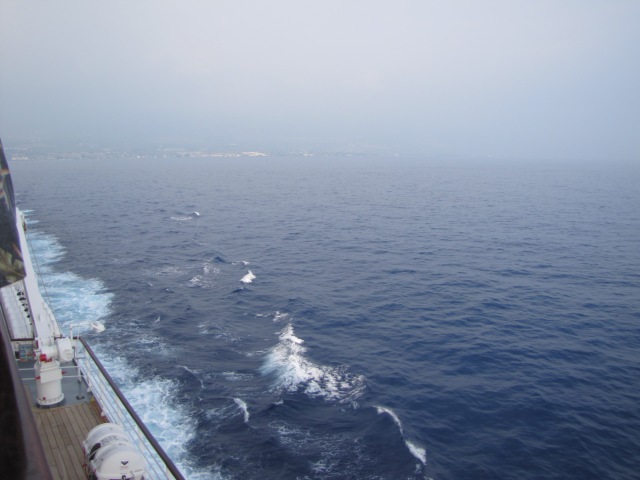