The week after Memorial Day, I took a solo trip to the Olympic Peninsula, to use up some vacation hours, and get away from the constant stress of work.  I jumped in the trusty old RDX (old, from 2008), drove onto the Kingston Ferry (where the fare-taker asked if I was really a senior!), and headed over to the beautiful Olympic Peninsula of Washington State.  It was a nice day, and I was going to familiar territory.  No maps or charts needed-just point the car in the right direction and go.  Down Highway 101, west toward Sequim first.  I spent two days in Sequim, and one day in Port Townsend.

I arrived in Sequim around 3:30PM, and checked into my motel.  Then, I took a drive up into the hills south of town, to visit property owned by a work acquaintance.  He is a sailor, and found a nice piece of land near the John Wayne Marina.  He gave me directions, and I found it fairly easily.  This is the view from that piece of hilltop property. 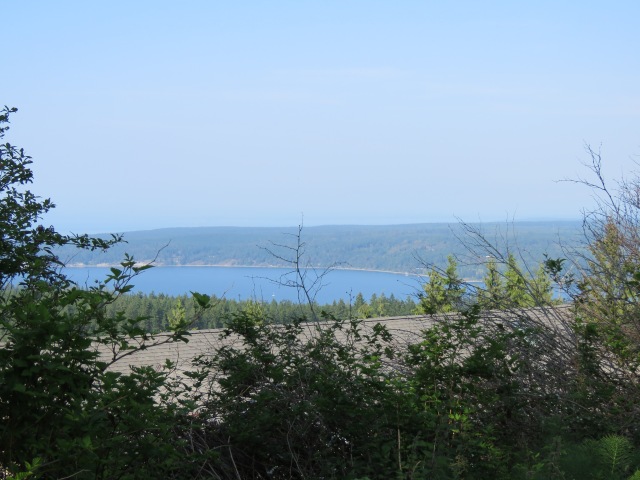 He wasn’t joking when he said he had a view of the water!

I was impressed by the house of one of his to-be-neighbors.  Nice place!

After that, I drove down to the John Wayne Marina.  I have to say that the name is more impressive than the place.  But it has a nice quiet beach. 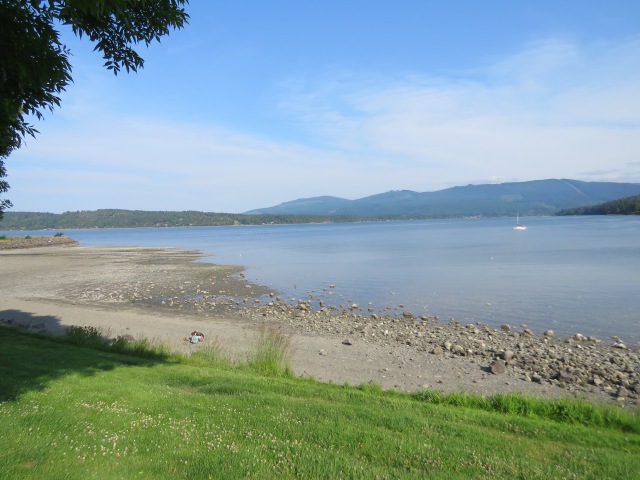 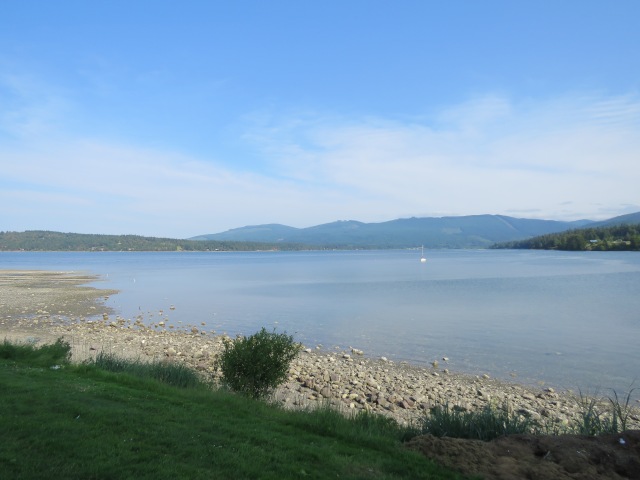 I still had daylight left, so I drove back to Sequim, and out to the Dungeness National Wildlife Refuge, where I had plans to spend the next day.  It was too late to go down to the Spit, but I drove along the approach road, and stopped at a couple of the overlooks there.  I actually got some very nice pictures.

There are lots of these bushes at the top of the bluff, with pretty flowers-they are wild roses and are everywhere.

This is the view north over the bluffs down to the Dungeness Spit. 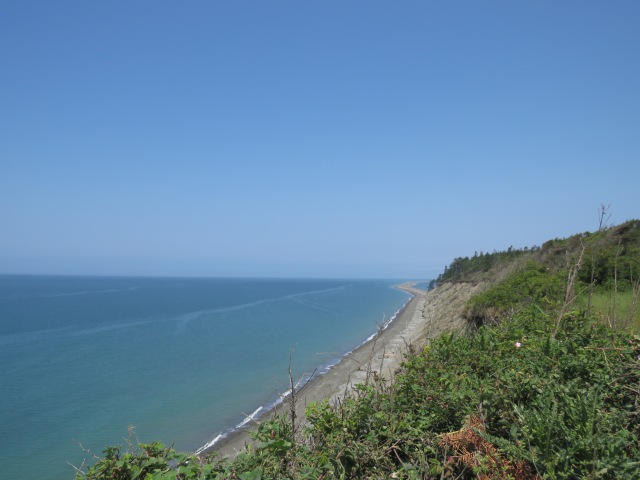 Here’s the view looking south.  All the way to the right (west) is Port Angeles. 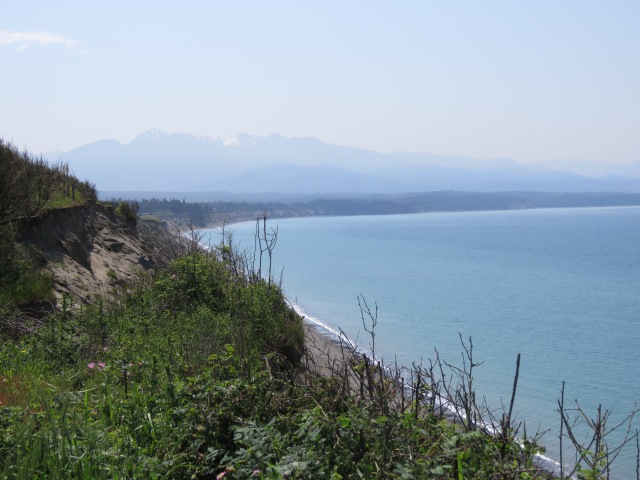 This is the Spit itself, to the north.  It is five miles long, with a lighthouse at the end. 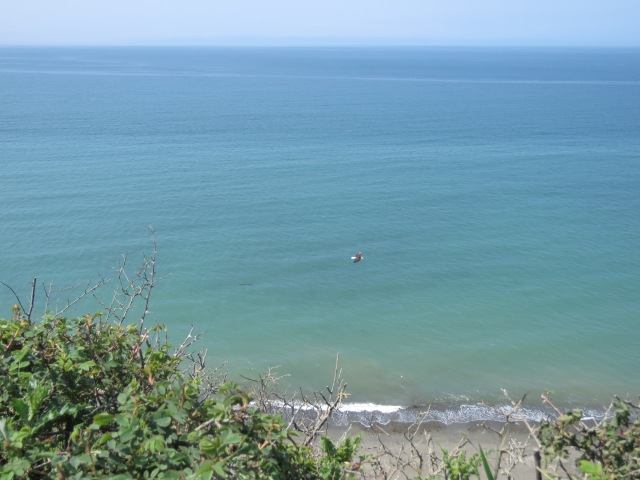 Actually, they are pretty common here in the Pacific Northwest, but it’s still a thrill to see one.

The next day, after a lazy morning doing nothing at all, I headed down to the Spit for a hike.  I actually got to use my National Park Senior Pass for the first time, as the refuge is part of the Olympic National Park.  It was foggy, and that fog did not lift all the time I was on the path and down to the Spit itself.  Well, I already have hundreds of Dungeness pictures from previous trips, so I took a lot of artsy pictures in the fog, and even captured some wildlife.

The path down to the Spit is through a stand of second-growth timber, and is actually very pleasant.

I have no idea what these orange flowers are, but they are common around the Spit.  Followers?

I was taken with this apparently-live tree growing around a dead one.

Above is the path down to the Spit.

And, of course, what’s a National Park without some guilt? 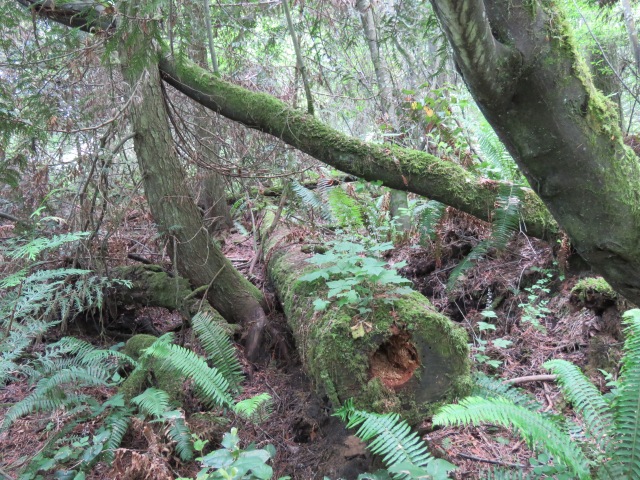 As I rounded a bend in the path, I got my first view of the Spit below, in the fog.

Some of the trees beside the path looked positively eerie in the fog. 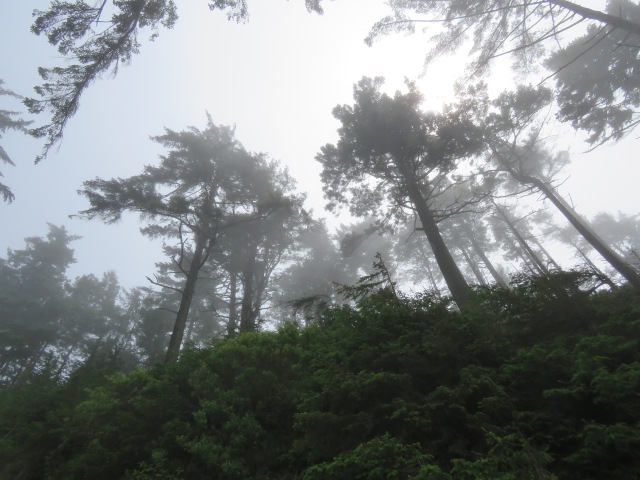 As did the Spit itself. 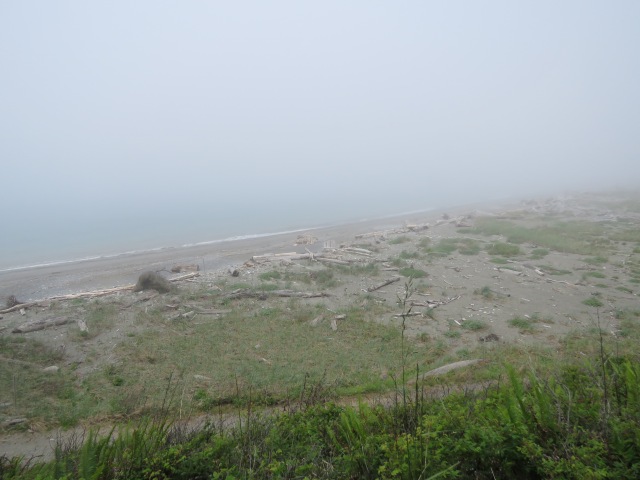 I really loved all the beautiful driftwood on the beach.  Many of these must have been huge trees when they were alive.  And people have added their enhancements over the years-lots of little piles of rocks in the branches and crevices. 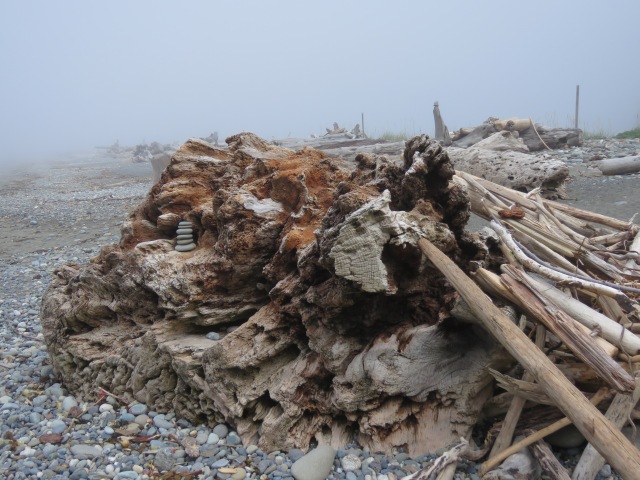 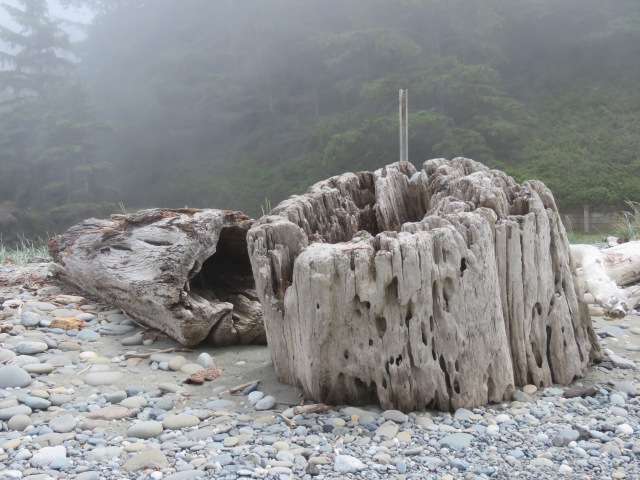 Doesn’t this one look like a log-shark?  It sure did to me! Or maybe a wolf?

Beaches in Washington tend to be rocky, rather than sandy.  This is due to the fact that granite and basalt form much of the foundation around us, and what falls off ends up on our beaches.  Even the rocks are beautiful.

I took this one-minute video, to give you a sense of the beach that day.

Behind me, to the east, is a small bay, in the crook of the Spit as it winds its way north.  A little white-crowned sparrow was sitting on a piece of driftwood, seemingly posing for me.  I didn’t get too close, but he let me take his picture.

And then he turned around.  What a pretty bird! 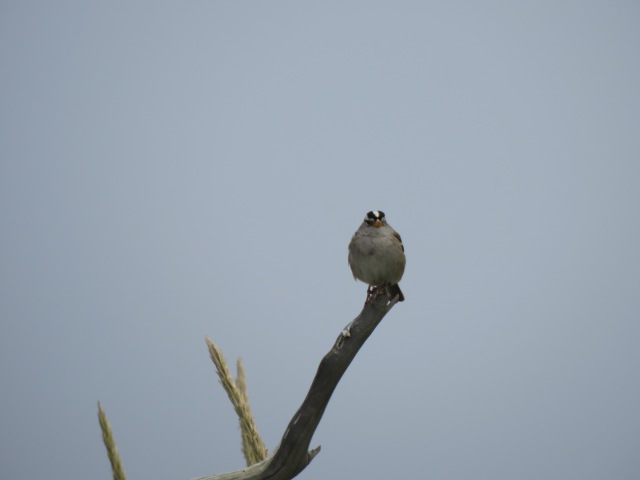 More pictures of the bay, and the grasses along its beach.

I’ve always been fascinated by driftwood, with the bark still on it.

And a couple of more sights on the path back up the hill to the car. 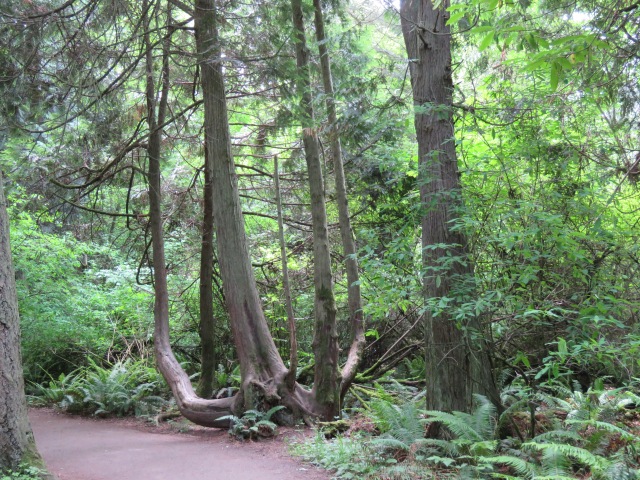 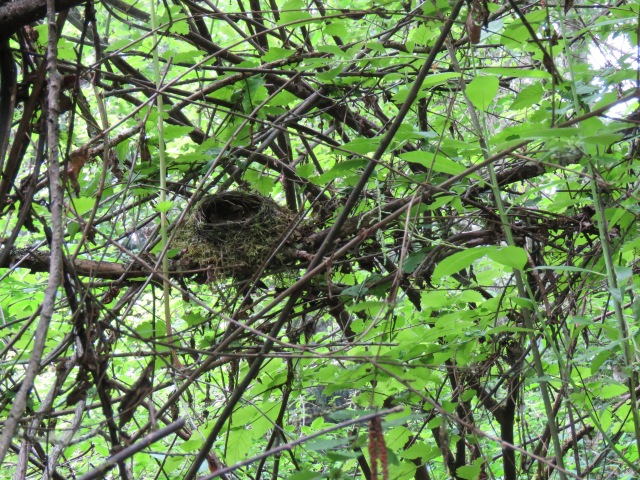 The next day, I drove up to Port Townsend.  I first stopped at Chetzemoka Park, overlooking the harbor and downtown.  Here is what I saw there. 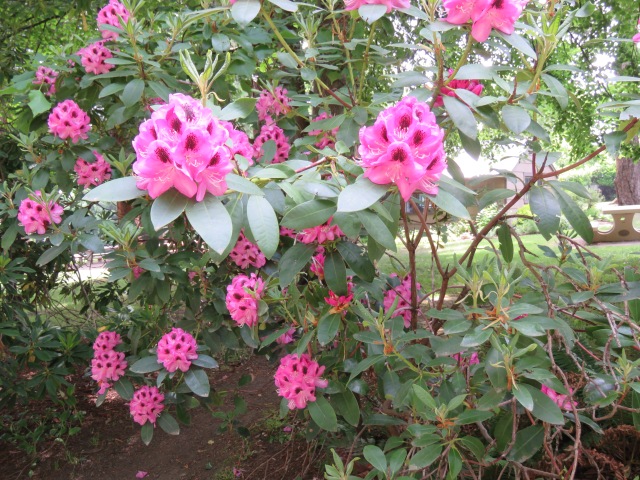 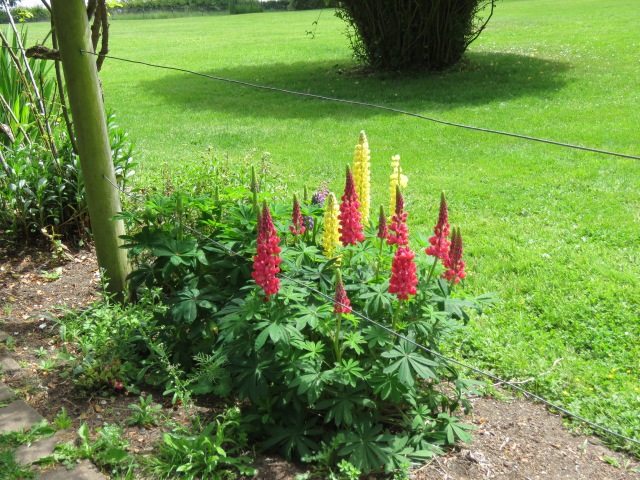 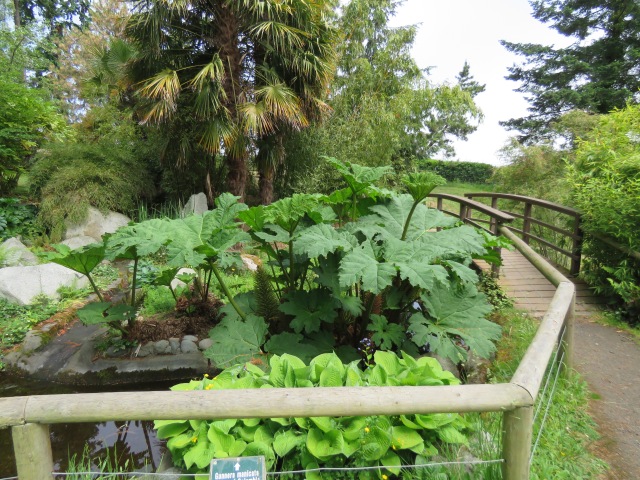 After spending a while at the park, I went to check in to my bed-and-breakfast inn, the Ravenscroft.  It is a beautiful building, and I had a nice room on the second floor. 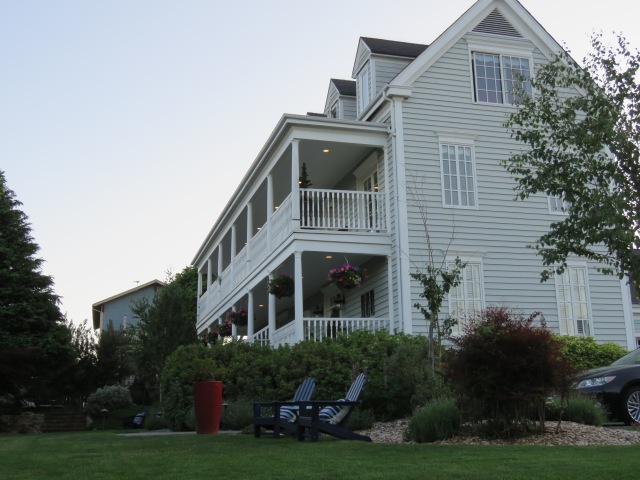 Here’s the view from there. 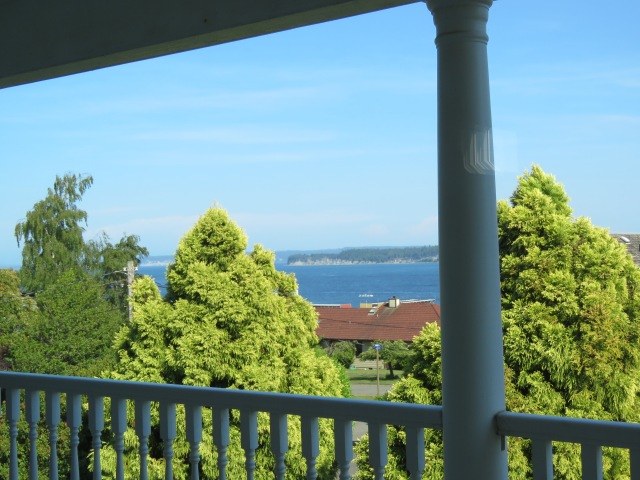 In the evening, I took a stroll downtown.  Port Townsend is a touristy place, with lots of nice gift shops and restaurants.  Its harbor is picturesque, and I found some features this time that were not there the last time I went!  It looked like someone had fun piling up the jagged rocks, making “rock people”. 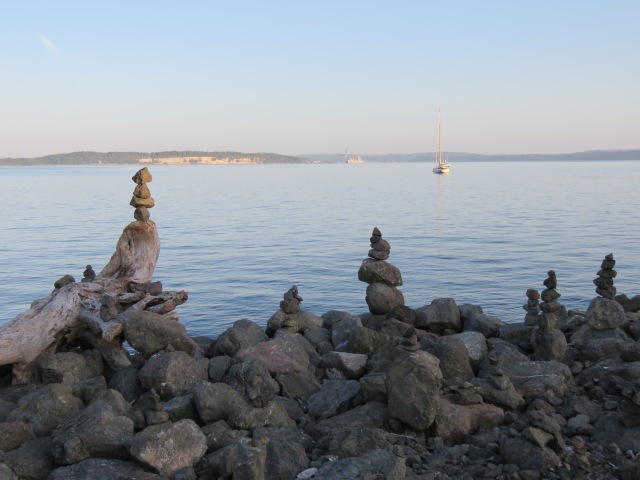 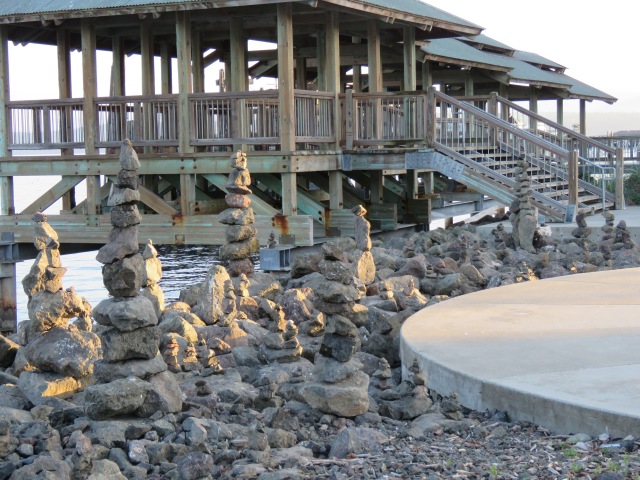 The next day, I did some sightseeing around the area, where I had not been at all.  I first drove through town, and admired the many old houses around.  PT has a reputation for having many Victorian-era houses that are well-kept (and very expensive).  Many have been re-purposed as apartments or bed-and-breakfast inns like Ravenscroft. 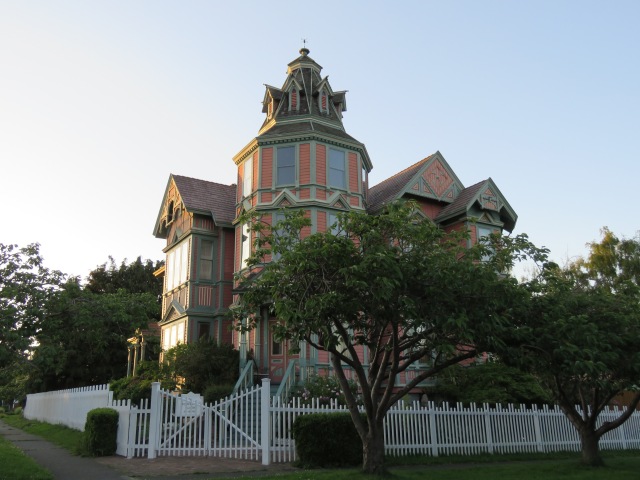 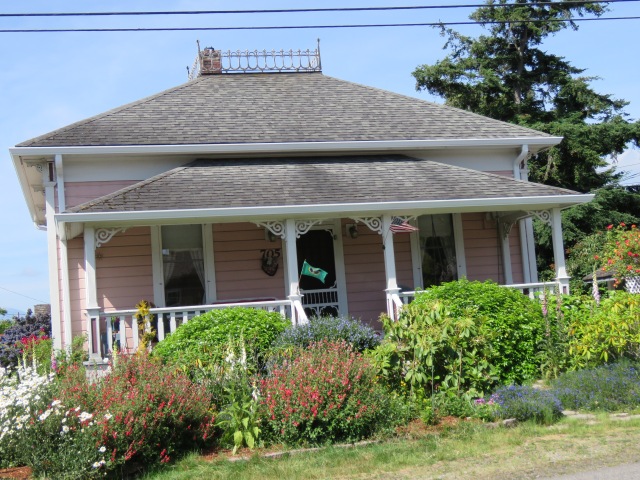 Then, I drove south out of town, and headed east toward the water.  I discovered Indian Island Park, which consists of Lagoon Beach and Mystery Beach.  They were really beautiful.  I especially got a kick out of the river-pools running into the main body of water, because they were shallow enough to observe all the crabs-dozens of tiny guys under each rock and on top of the rocks too. 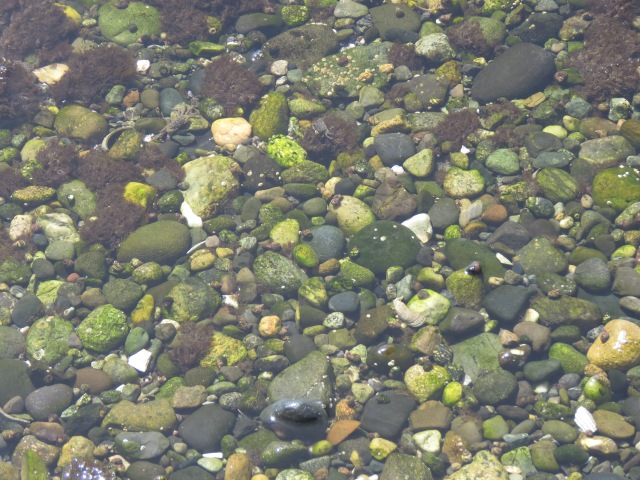 This is Nordland, Washington, on Marrowstone Island. 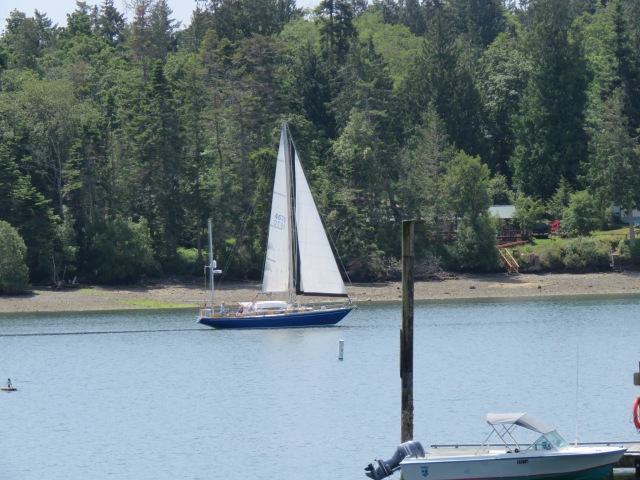 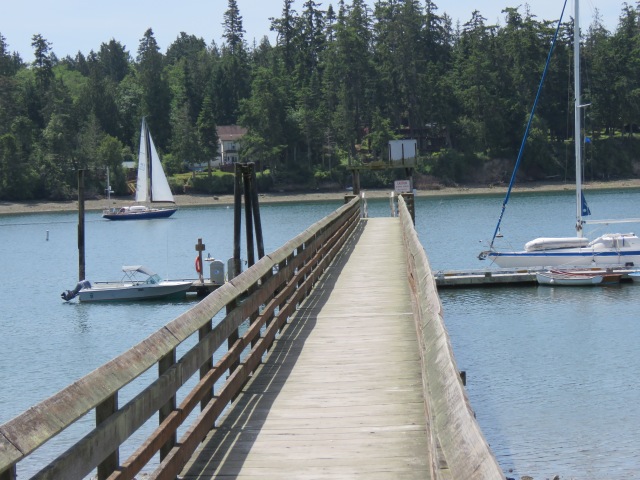 All too soon, it was time for me to head back to Port Townsend to catch the ferry to Whidbey Island.  When I boarded the ferry, I took lots of pictures of the PT harbor, and the fleet of sailboats out that day.

Once we hit Whidbey Island, I exited the ferry and headed for the south end of the island, from which I was to board another ferry to Mukilteo, near home.  The last sight of my trip just totally made me laugh.  The car in front of me in the ferry line pushed every one of the standard Progressive buttons, and was not at all shy about advertising its persuasions.  Typical!

Resist Hate, except for President Trump!

All in all, a delightful getaway.  I had a great time, and came back refreshed.