It occurred to me recently that my Christmas posts have been very heavily Peanuts.  I love A Charlie Brown Christmas, but I also love Harry Potter.  I was enchanted by my first taste of Harry and his Wizarding World, when I saw the first movie in 2001, and have been an avid fan ever since.  I joined Pottermore when it came out, and worked my way through all the books in the video-game-like part of the site (which was shut down when the kid users made hash of it).  I have remained a member of what is now Wizarding World, gotten sorted into my Hogwarts House (Slytherin), and Ilvermorny House (Horned Serpent), gotten my wand (pine wood with unicorn-hair), and Patronus (a stoat, a relative of the weasel).

One of my favorite parts of Harry Potter and the Philosopher’s Stone was the time of Harry’s first Christmas at Hogwarts.  Since he had no real family to go home to over the holiday, he stayed at school, along with the Weasley kids and a few others.  One of my very favorite lines in all the books was Harry’s comment when he awoke Christmas morning to find a small pile of presents at the foot of his bed.  Since he really hadn’t been expecting anything at all, and this is what happened:

On Christmas Eve, Harry went to bed looking forward to the next day for the food and the fun, but not expecting any presents at all.  When he woke early next morning, however, the first thing he saw was a small pile of packages at the foot of his bed.

“Happy Christmas,” said Ron sleepily as Harry scrambled out of bed and pulled on his dressing-gown.  ‘You, too’, said Harry. Will you look at this? I’ve got some presents!”

“What did you expect, turnips?” said Ron, turning to his own pile, which was a lot bigger than Harry’s.

One of his presents was his own wizard chess set (from a cracker at Christmas dinner), and he and Ron would play together.

Harry also received his father’s invisibility cloak, which he just had to try out in the corridor after hours. While under the Cloak, he discovered the room where the Mirror of Erised was stored, and spent hours in front of it, viewing the family he never had.

He spent some time alone in the Great Hall, thinking about his family, and what he had missed.  And remembering that Hogwarts was his new family.

In Harry’s Fourth Year, he encounters some of the most harrowing problems he has yet had to face, starting with being chosen by the Goblet of Fire to be Hogwarts’s second champion in the TriWizard Tournament.  But he rises to the occasion.  And then, he is presented with a new challenge-asking a girl to the Yule Ball. It doesn’t go as well as he might have hoped, but the Great Hall was certainly beautiful with all its winter decorations.

In Harry’s Fifth Year, he is plagued with visions, indicating that Voldemort is inhabiting his mind when his defenses are down. He does, however, make good use of those visions, and hurries to the Ministry of Magic to save Arthur Weasley from Voldemort’s snake, Nagini.  Christmas is spent with the Weasley family, celebrating Mr. Weasley’s recovery.

In Harry’s Sixth Year, the social side of being a wizard shows itself again, when Harry is invited to bring a friend to Professor Slughorn’s Christmas party.  It was almost comic, reading about Hermione’s attempts to lose her date, Cormac McLaggen.  But the food items were tasty, and Harry watched as party-crasher Draco Malfoy was taken down a peg or two when Slughorn did not fall all over him with praise about his relatives. 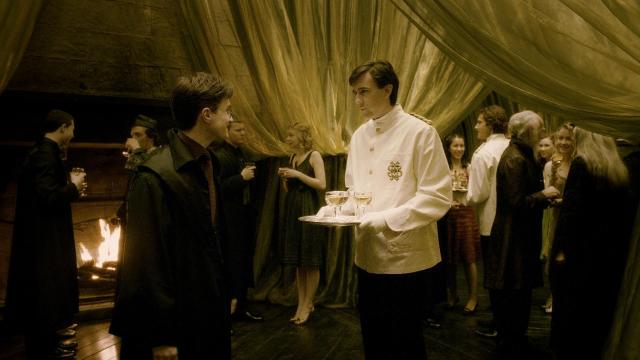 The first book, and the first movie, remain my favorites.  The kids were so well-cast, and they all did all of the movies, so you could literally watch them all grow up.  Jo Rowling did indeed create a fully-formed Universe, alongside the one we all live in.  I don’t know about you, but I sometimes think about how interesting it would be to be a Witch or Wizard in today’s world.

I hope you all have a Very Harry Christmas!

2 thoughts on “Have a Very Harry Christmas!”