This case was a total travesty from Day One, and documents revealed this week show a real conspiracy, led and known by those at the top of the Obama Administration FBI, led by James Comey.  The reputation of the FBI as an investigative agency tasked with finding and bringing the Bad Guys to Justice has been dragged through the mud, and may never recover.

It is my hope that General Flynn and his excellent lawyer Sidney Powell immediately file lawsuits against the individuals involved, NOT the Agencies.  Start with Jim Comey, Peter Strzok, Lisa Page, James Clapper, and Rod Rosenstein.  They are the ones who ruined a good man’s reputation and threw him into bankruptcy and penury.  And they should sue for triple damages because of it.  General Flynn at least deserves to get back the wealth that he spent fighting the bogus charges.  And Susan Rice, who helped “unmask” General Flynn while wiretapping the Russian Ambassador with whom he was (legally) speaking, needs to be sued into bankruptcy, and prevented from ever working in any government position again.

It it also time for President Trump to thoroughly clean house at Justice.  He needs to fire every single political appointee from any Administration other than his own.  That includes the US Attorneys who continually thwart his actions.  He should have done that on Day Two of his administration in January of 2017.

The next piece of Good News today:  The Texas Salon owner who was jailed for violating the Dallas “Lockdown ordinance” was freed today by a ruling of the Texas Supreme Court. 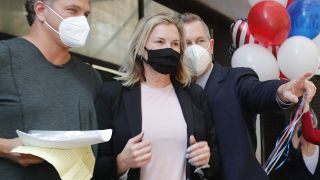 The Texas Attorney General has also ruled that no one should be jailed for violating such an ordinance.  Much of the United States economy has been brought low, resulting in millions of citizens being thrown out of their jobs and onto the unemployment rolls, by state officials ordering people to stay home and businesses to shutter in the name of stopping the spread of the Wuhan Coronavirus.  The economic damage is turning out to be worse than the disease itself.  The people are starting to rebel against the Tyranny of local officials who are denying them the right to their livelihoods.

Congratulations to General Michael Flynn, and Ms. Shelley Luther for triumphing against Tyranny in its many forms.

3 thoughts on “There was actually some good news today.”