On our South Dakota trip, we spent a pleasant afternoon at the Mammoth Site, near the town of Hot Springs.  For some reason, we thought that there were probably few people at the Hot Springs that day.  Here’s why.

That’s what WeatherBug told me.

We were very pleasantly surprised to find that the site of the archaeological dig that revealed a huge number of bones of Ice-Age Mammoths, was entirely indoors.  The group that found the site, back in the 1950s, simply built a building around the entire site, which was a sink-hole in prehistoric times, trapping animal after animal when they fell into the warm pond when trying to drink.  Here’s a description of what happened.

Here’s what the inside of the building looked like.  I was impressed with the sheer beauty of the laminated-wood beams that spanned the building.  Aside from being an archaeological marvel, the building is an engineering marvel, too.  Archaeologists and volunteers who go there to help excavate all the fossils can do their work in air-conditioned comfort!

Visitors can walk all the way around the pit, and peer into the nooks and crannies where the workers painstakingly remove dirt and dust, and strain everything to find all the fossils.  There aren’t just mammoth bones here, but water creatures, and bones of short-faced bears.

The green arrows point out the locations of the mammoth footprints.  I thought the layers of sediment that made up the majority of the site quite pleasing-no two are exactly alike.

So, here are a bunch of pictures of various parts of the dig site.  There were thousands of bones from all parts of the mammoths that died there.  Many have been removed for exhibits, but many will remain where they are, partially revealed for visitors to marvel at. 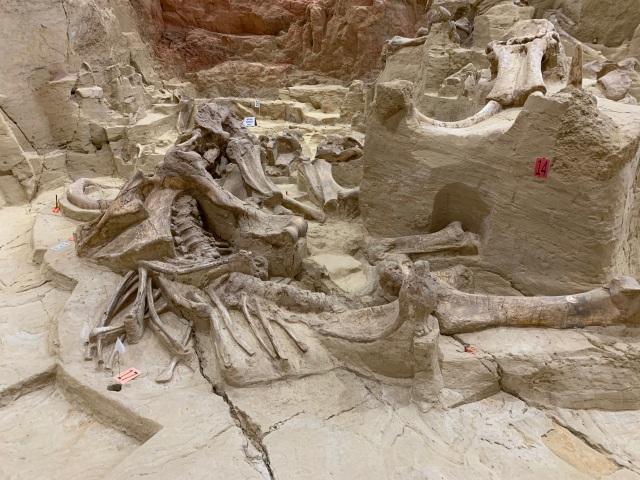 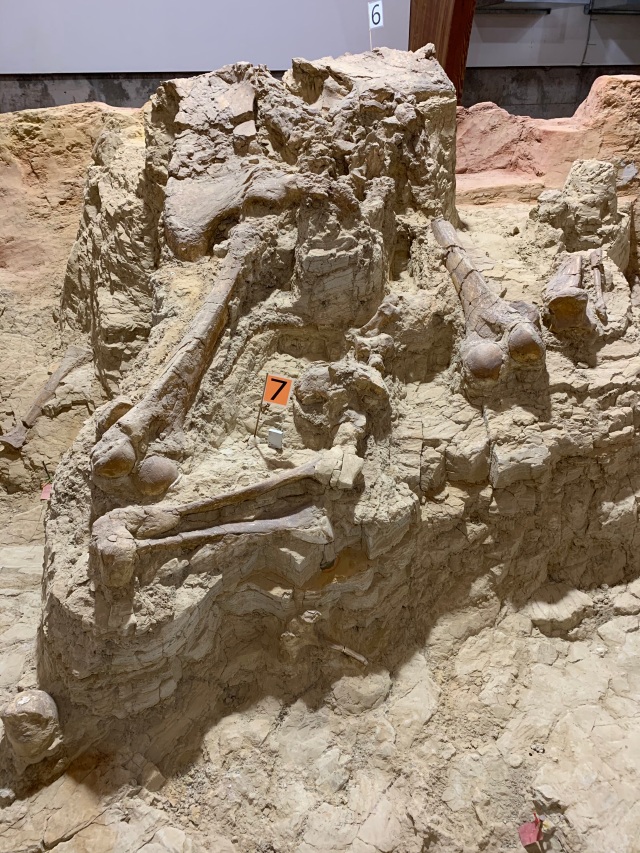 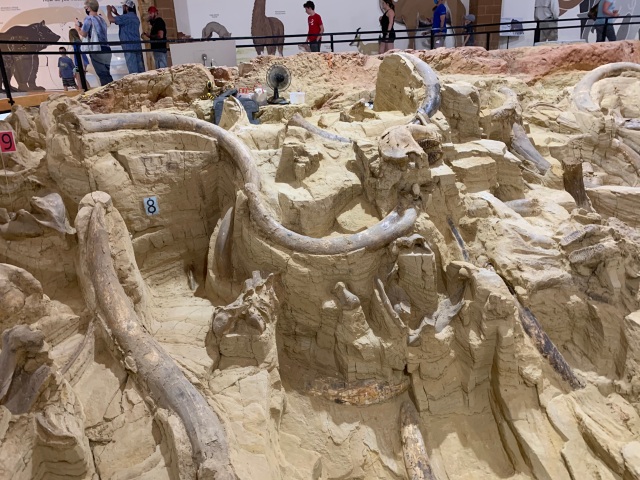 Just look at the size of those tusks!  You can use the people in the picture for scale.  Speaking of scale, here is a view of how the layers reflect the time period.

And, as the sign says about the sinkhole, they still have 45 more vertical feet to excavate. 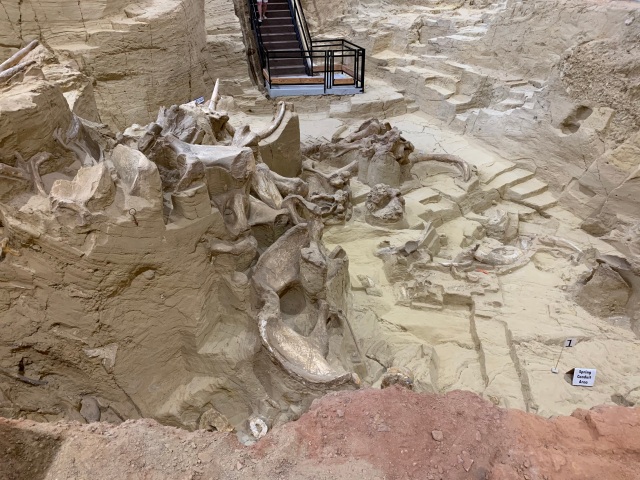 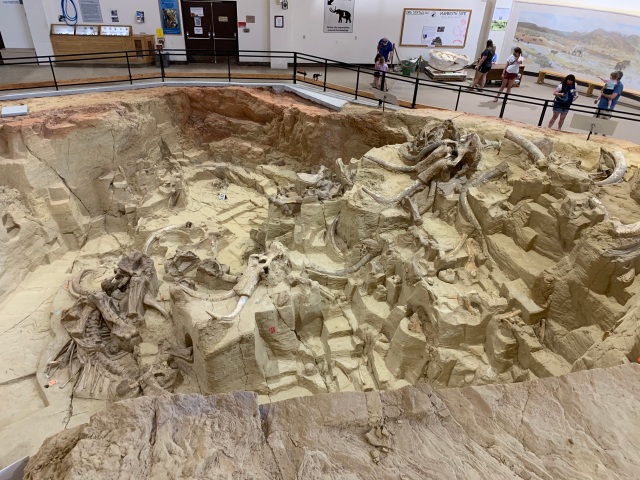 The two pictures above give you a good feeling for the scale of the entire site. 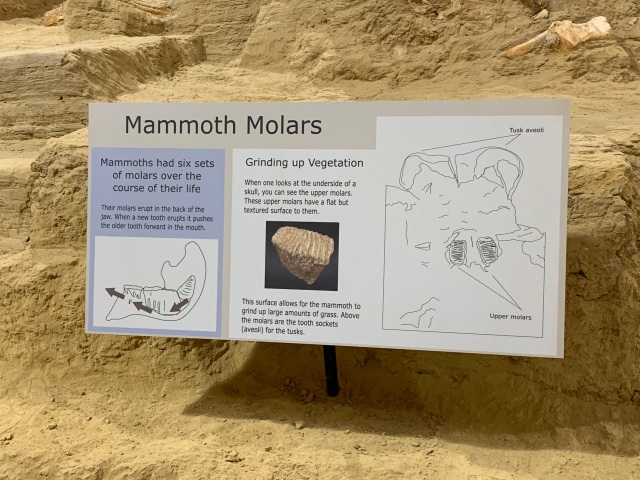 “My Dear, what big teeth you have”!  We appreciated the excellent signage provided.

On an entirely different note, on the way out of the pit exhibit, I stopped to read this sign commemmorating the completion of the building.  Sorry, but my “Grammar-Cop” side came out-can you spot the egregious typographical error?

When you exit the excavation area, there is another room full of exhibits, including a wall graphic about the bison that roamed this area with the mammoths.  On a different continent, it seems that the ancient inhabitants of the area that is today’s Ukraine, built houses from the many mammoth bones and tusks they retrieved from the animals they killed, presumably for food and clothing, or bones they found. 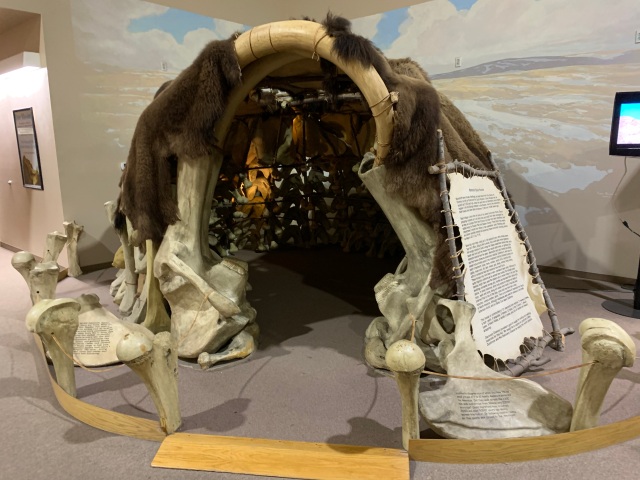 Most unusual dwelling, wouldn’t you say?

We had a great time viewing all those fossils, and maybe it would be fun to go there sometime and participate in the excavation as a volunteer.

4 thoughts on “The Mammoth Site”