In May of 2019, I took a little driving vacation by myself, to the Olympic Peninsula in Washington State.  One day, I went to one of my very favorite places in the world, the Dungeness Spit National Wildlife Refuge.  I have been there dozens of times, and every time I see something new.  The path to the Spit starts at the top of a bluff overlooking the Strait of Juan de Fuca, between the US and Canada’s Vancouver Island.  The path winds through mixed forest, and there is something beautiful around every corner.

At the top of the bluff, outside the refuge, there is a great view of the entire Spit.  Its total length is 5 miles, and there is a lighthouse at the end.

I took the above picture the day before my walk, when it was sunnier.

On this particular day, it was foggy, but the forest walk was pretty clear.

This tree (s?) looks like it grew around another tree that was just a big snag, probably destroyed by lightning.

There’s not a whole lot of color, other than the normal green and brown, so the orange flowers really stood out.

Further down the path to the Spit, you come out of the forest.

If you look to the left, this is what you see.  Trees in the fog.  Here is the path down to the Spit, hugging the side of the bluff. 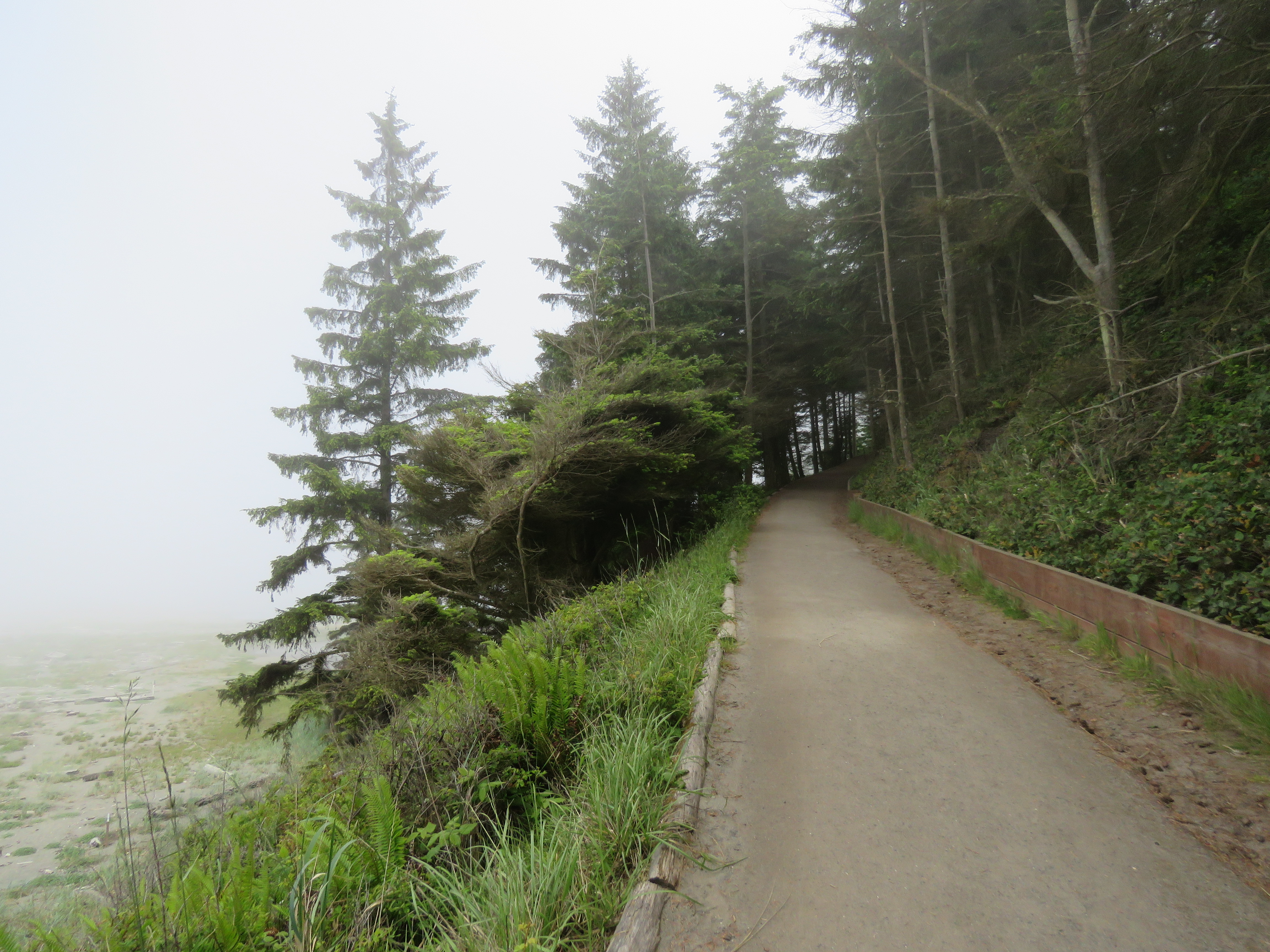 You can see on the left how foggy it was that day.  The Spit itself was nearly invisible in the fog.  There is a protected cove on the landward side of the Spit, and pebbly beach on the sea-side.

These are beach-grasses growing near the cove.  On a branch of a piece of driftwood, a white-crowned sparrow posed for me to take his picture. 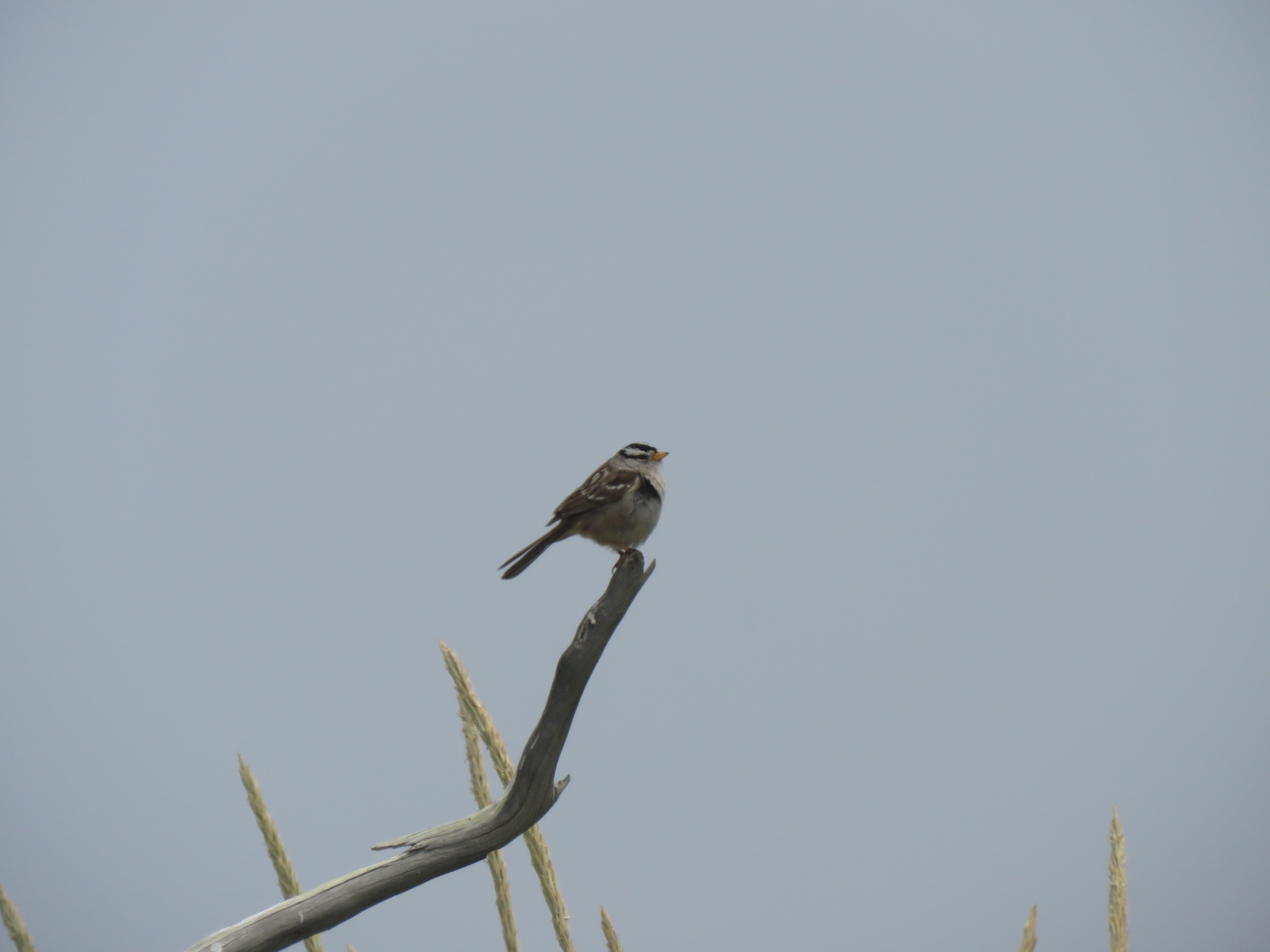 Yes, I think he actually turned sideways so I could capture his profile!

I have always loved the pebbly beach.  If you look closely, the rocks are quite colorful, and there is always the soothing sound of the waves washing up on the beach.  On this day, I took some video with my new iPhone.

The driftwood and the beach presented numerous aspects.

I always thought this piece of driftwood looked like a shark. 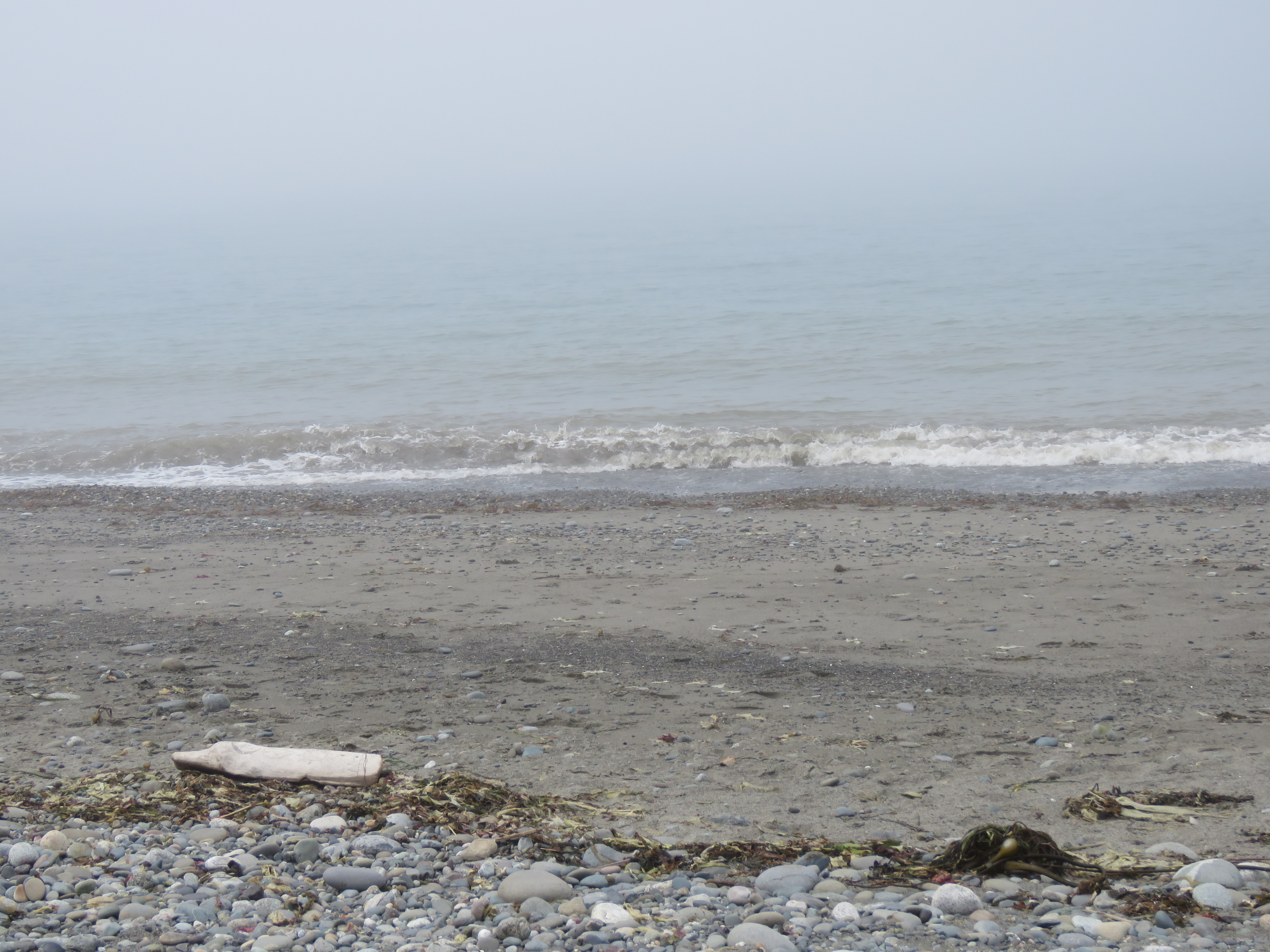 Sometimes, when it is clear, you can see container-ships plying the sea lanes from Puget Sound up through the Straits and out to the Pacific Ocean. Not on this particular day!

People just have to mark their presence!  Someone stacked some flat stones on this piece of a huge log.  At one time, this may have been an old-growth Douglas Fir tree.

This is the protected cove on the other side of the Spit.  On the right, concealed by the trees, is the outflow of the Dungeness River.  I have seen river otters playing there in previous visits.  You can also sometimes see herons fishing in the pond.

The climb back up the bluff is a bit more strenuous than going down!

This is a nice example of a “nurse-log”, a fallen tree that serves as the substrate for many other plants to grow.  Sometimes big trees grow from these logs.

I started my journey at about 10AM that day, and the fog did not lift until much later in the afternoon.  Even in the fog, the Dungeness Spit is a wonderful place to walk, and see all sorts of land and sea vistas.  It’s rarely crowded, so you can just sit on a log and listen to the sound of the waves, and the cries of gulls, that never stop.  Very relaxing.