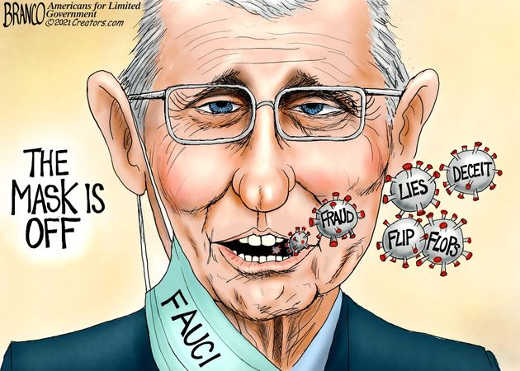 For over a year, the medical establishment of the United States, and most of the US Federal Government, has been listening to the advice of so-called infectious-disease expert Dr. Anthony Fauci, who has been in his very well-paid government job for decades.  That advice basically caused government to shut down the thriving US economy, close schools, ruin millions of businesses large and small, and cause most people to be placed under “medical house arrest” for months.  All supposedly to stop the spread of what is now called the Wuhan Coronavirus.

Just this week, we learned that (as many conservative experts have been speaking about, and throttled for) the “esteemed” Dr. Fauci and his government agency have been funding the research at the Wuhan Institute of Virology.  We learned about this, due to the Freedom of Information Act release of thousands of his emails to colleagues in the US, and researchers at the WIV.  We learned that the Wuhan Coronavirus may actually have been a bioweapon, designed in Communist China, to ruin the world economy.  The information that, until now, was derisively called a “conspiracy theory” for months by the corrupt US Media; now is found to have been no conspiracy, but the Truth.  YOUR tax dollars went to fund “gain-of-function” research on a virus that may have decimated lives and businesses all over the world.  Just think about that.  We now know that everything the Health Nazis were telling us about the virus, and how to fight it, was a bunch of Lies.

It also seems that one new source of information about what has been going on inside Communist China, is a Communist Chinese Defector, who has been in the US for a few months, and is being debriefed by the US Defense Intelligence Agency.  Below, I am reprinting a comment from a post over on Ricochet.com.  I thank Ricochet Member “Unsk” for collating this information in his comment.

“In an exclusive story at RedState, Jen Van Laar reports that sources inside the intelligence community say a high-ranking defector from China has been working for months with the U.S. Defense Intelligence Agency (DIA). According to Van Laar’s confidential sources, that high-ranking defector claims to have knowledge of special weapons programs in China—that include bioweapons.Adam Housley first reported via Twitter on Thursday that “the increased pressure on China in recent days is due to a defector with intimate knowledge” of the program. According to Housley, FBI director Christopher Wray “didn’t know right away because they wanted to make sure they got all they needed before telling him.”

In fact, Wray was “ambushed” with the information, according to Van Laar’s sources, as was the CIA. “Sources say DIA leadership kept the defector within their Clandestine Services network to prevent Langley and the State Department from accessing the person, whose existence was kept from other agencies because DIA leadership believes there are Chinese spies or sources inside the FBI, CIA, and several other federal agencies,” according to the report.

Why was the defector so important that he had to be kept under wraps?

According to RedState’s sources, “the defector has been with the DIA for three months” and has provided “an extensive, technically detailed debrief to US officials.”“In DIA’s assessment, the information provided by the defector is legitimate,” wrote Van Laar. “Sources say the level of confidence in the defector’s information is what has led to a sudden crisis of confidence in Dr. Anthony Fauci, adding that U.S. Army Medical Research Institute of Infectious Diseases (USAMRIID) personnel detailed to DIA have corroborated very technical details of information provided by the defector.”

The question will be, as it almost is when political figures are caught in a coverup: What did they know and when did they know it? And whoknew what was really going on?

“If any of this turns out to be true—particularly the suggestion that China may have intentionally unleashed the most deadly bioweapon in world history—you might want to begin thinking about where you’re going to spend the U.S.-Sino War. If, as Housley claims, the FBI, CIA, and other federal agencies are swarming with Chinese spies, it would constitute the biggest national security failure in U.S. history—and the most deadly.”

“The implications are terrifying.”

5 thoughts on “Communist China is a deadly threat to the world, and today we know a lot more about that threat.”