This post by Ricochet member “Unsk” is directly copied over.  Since the comments are also very pertinent, I will copy them too.  This is something I have been wondering about for a while now, and my Rico friends have generated a very good answer.

From  Benjamin Braddock and “Why Was News of India’s  Success with Ivermectin Suppressed? at American Greatness.

A little recent history from India:

“The April COVID surge in India is an interesting microcosm of what went wrong in this pandemic—and what went right.

As cases and deaths began to mount exponentially, a new wave of terrifying headlines and images also began to ripple across the West, accompanied by footage reminiscent of those first videos out of Wuhan and Iran in the early days of the pandemic.

A BBC report from outside of a hospital in Delhi was nothing short of gut-wrenching. Sick people on stretchers outside of the hospital, drawing their last labored breaths before a doctor or nurse could even see them. Frantic and traumatized family members begging for someone to come see their mother, their father, their sister, their brother. No one was coming. The people outside on the stretchers slipped quietly away into eternity.” “And for India, this became the case at a national level. For much of the pandemic, COVID was so mild there relative to other countries that scientists were trying to figure out why they were doing so well.”

“Then came the April elections, which in India are carried out in phases rather than all in one go. There were huge rallies with politicians where hundreds of thousands of people gathered, a near perfect storm for the highly infectious Delta variant. India soon became the new global hotspot for COVID. The media maelstrom fed fears that a new wave would soon arrive in the West.”

“But seemingly overnight, stories about India’s COVID surge disappeared from Western media. Why?

“India’s surge was over in a matter of weeks. India’s doctors and public health authorities responded much more effectively and intelligently than our own. India’s Ministry of Health and Family Welfare revised its guidelines on April 28 to include a recommendation that asymptomatic and mild cases be treated with Ivermectin. Along with the government, the Indian Council of Medical Research and AIIMS, Delhi (India’s premier medical college and hospital), and many state government and health authorities also bucked World Health Organization recommendations and urged the use of Ivermectin. Since then, case counts have declined in Delhi by 99 percent, in Uttar Pradesh by 98 percent, in Uttarakhand by 97 percent, and in Goa by 90 percent.”

I think it was because India was too good of a case study in how the virus can be defeated without experimental gene therapy vaccines. All it takes is a cheap, safe, widely used drug called Ivermectin.”

A Short History of Ivermectin’s Effectiveness

“In the late 1960s, a Japanese microbiologist, Satoshi Ōmura, took a soil sample from a golf course near Tokyo, and the rest is, as they say, history. From this soil sample a new strain of bacteria was cultured, S. avermictilis, which was shown to have a remarkable effect on worms and other parasites. It quickly became a top-selling veterinary drug. In 1987, it was approved for human usage to treat the devastating tropical disease onchocerciasis (river blindness), a disease caused by worms and transmitted by flies which results in blindness if left untreated. Since then, more than 3.7 billion doses have been distributed globally, thanks in no small part to the tireless work of former President Jimmy Carter.

Over time its usage has expanded to treating other parasitic ailments, including head lice and scabies. Its safety profile is remarkable. It is so safe that it can be handed out to illiterate people in remote communities in the developing world with little instruction aside from “swallow this pill.”

In 2015, Ōmura and his partner William Campbell were awarded the Nobel Prize in Medicine for their discovery of Ivermectin and its anti-parasitic properties. In 2012, Dr. Kylie Wagstaff discovered that Ivermectin also possessed antiviral properties.

Early in the pandemic, Wagstaff and a team of researchers at Monash University in Melbourne, Australia conducted cell culture experiments to see if Ivermectin might be a useful therapy in the war on COVID. Their findings blew away all expectations.”

“Ivermectin halted the replication of the virus and completely eradicated it from the cell culture in under 48 hours. Their findingswere released on April 3, 2020. Since then the findings have been replicated in over 60 trials and natural experiments, including 31 randomized control trials. Most of the suffering could have been avoided, but the bureaucrats who run our public health establishments condemned hundreds of thousands of Americans to death.”

LET’S REPEAT THAT: “IVERMECTIN HALTED THE REPLICATION OF THE VIRUS AND COMPLETLEY ERADICATED IT FROM CELL CULTURE IN UNDER 48 HOURS.”    THIS WAS KNOWN BY LEADING DOCTORS AROUND THE WORLD FROM A PUBLISHED STUDY ON  APRIL 3, 2020.

WHAT? THEN WHY WASN’T USED IMMEDIATELY AND COMPREHENSIVELY HERE IN AMERICA? HUNDREDS OF THOUSANDS OF AMERICAN LIVES COULD HAVE BEEN SAVED.

The likely possible answer from Braddock:

“Why would this information be suppressed by our media outlets? Well, under the FDA’s rules, an emergency use authorization (EUA) like the ones given for the three main experimental gene therapy vaccines can only remain in force so long as there is not a superior alternative therapy available. When you consider that the absolute risk reduction from taking Ivermectin as a COVID prophylaxis is far superior to that of the products from Pfizer, Moderna, and Johnson & Johnson, the justification for administering these experimental treatments disappears.”

Short Answer: The Killer Vaccines from Pfizer, Moderna and Johnson & Johnson could not be approved for use against COVID if the effectiveness of Ivermectin was acknowledged by the FDA, so the knowledge of Ivermectin effectiveness had to be thoroughly squashed.

This was simply a case of mass murder on an unbelievable scale of Americans by Dr. Fauci and his band of corrupted ghoul bureaucrats along with Big Pharma and their minions.

Now, for a selection of comments by various other Ricochet members:

Forbes: Meet The 40 New Billionaires Who Got Rich Fighting Covid-19 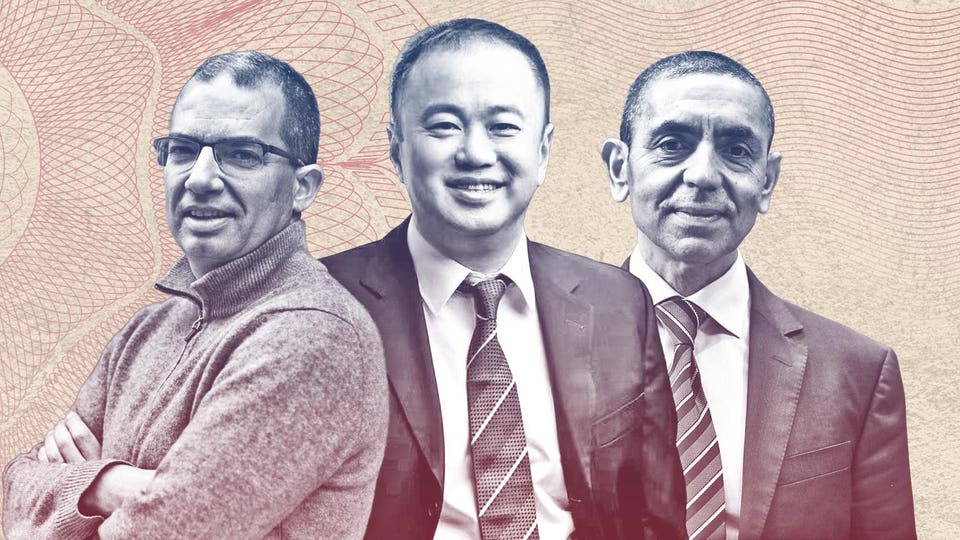 One year later, things couldn’t be more different: a record 493 new billionaires joined the list this year, propelled by a red-hot stock market and unprecedented economic stimulus. Among those newcomers are at least 40 new entrants who draw their fortunes from companies involved in fighting Covid-19. Some, such as Moderna CEO Stéphane Bancel and BioNTech cofounder Uğur Şahin, have become household names thanks to the vaccines they helped develop. Others got rich making everything from personal protective equipment and diagnostic tests to antibody treatments and software that helps authorities schedule vaccination campaigns, which will be essential in reopening economies and returning to normal life.

The richest of these new billionaires is Li Jianquan, the president of Chinese medical products manufacturer Winner Medical, which ramped up production of masks and medical overalls to supply frontline workers across the globe. Winner Medical’s IPO on the Shenzhen stock exchange in September 2020 instantly made Jianquan, 64, a billionaire several times over thanks to his 68% stake in the company, worth $6.8 billion.

Some vaccine companies have been so successful that their rise over the last year has minted several new billionaires from the same company, including four apiece from Moderna and Tianjin-based CanSino Biologics, which saw its one-shot vaccine approved by Chinese regulators in February. And it’s not just the vaccine discoverers: companies that mass produce the vaccines and contract research firms that help firms run clinical trials have both reaped the rewards, creating new fortunes for people like Juan López-Belmonte López of Spanish pharma outfit Rovi and Karin Sartorius-Herbst and Ulrike Baro of German biopharma firm Sartorius AG.

The Corporate Media is not your friend.

Big Pharma spends nearly 68% of its $30 billion annual ad dollars to persuade doctors and others to prescribe their drugs to patients. Could this explain why more doctors prescribe remdesivir instead of hydroxychloroquine?

According to a study conducted by JAMA also confirmed by Arstechnica, Big Pharma also spends nearly $30 billion that health companies now spend on medical marketing each year. What’s surprising about the spending is that around 68 percent (or about $20 billion) goes to persuading doctors and other medical professionals—not consumers—of the benefits of prescription drugs. In other words, the Big Pharma shells out $20 billion each year to schmooze doctors and $6 billion on drug ads.

According to many drug analysts, charming doctors isn’t surprising and not a new occurrence. Big Pharma traditionally spends most of its marketing dollars on schmoozing doctors “by sending sales representatives to doctors’ offices for face-to-face visits, providing free drug samples and other swag, offering payments for speeches, food and beverages, travel, and hosting disease ‘education.’”

However, what is new and appears to be more “shadier situation—is the explosion of direct-to-consumer (DTC) marketing that couples with those efforts for a one-two marketing punch.” The Big Pharma’s influence is not limited to doctors and other medical professionals. The Big Pharma has also wields over media outlets.

For example, in 2018, an estimated 70% of all news advertising in the US came from pharmaceutical companies. I have written elsewhere about how “reporting” on medical issues can be difficult to distinguish from outright marketing for drug companies.

With the ongoing coronavirus pandemic, the question everyone is asking is, could this explain why more doctors are prescribing remdesivir instead hydroxychloroquine?  Remdesivir is a broad-spectrum antiviral medication developed by the biopharmaceutical company Gilead Sciences, one of the 7 Big Pharma we mentioned above.

“The influence that the pharmaceutical industry wields over media outlets is no secret…An estimated 70% of all news advertising in the US came from pharmaceutical companies.” I guess it’s no surprise why mainstream media loves Remdesivir and hates HCQ.

I just finished listening to Joe Rogan’s podcast featuring Bret Weinstein and Dr. Pierre Kory, on Ivermectin and big tech censoring of information. I think it’s 2 hours long, but even if you only listen to half an hour of it you will get a lot of interesting things to think about.

Here is where I could listen to it without having any account with a podcast hosting service.

Please note that these are not all the comments.  But it does give you an idea of the scope of corruption at the top of the US government, the Administrative State,  and the Public Health Elite.  The blood of thousands of Americans is on their hands.

Please do not believe the Health Nazis when they tell you to be very afraid of all the “new variants” of the virus out there, that may “force” them to try to put America in house arrest again.  Do not let them force you to give up your liberty or your livelihood, or remain in fear of all other Americans.  Have your doctor write you a prescription for Ivermectin, and have it around in case you do get sick.  In any case, your chance of survival being 99.5%, you should not do what they demand you do.  They are lying.  Stand up and declare yourself a Free Person.