In 2020, the Washington State Fair in Puyallup (pronounced Pew-al-up), was canceled, like everything else, due to Covid.  This year, the Almighty Dictatorial Health Nazis in Olympia and Tacoma “let” it go on.  Albeit with a Mask Mandate, requiring that all fair-goers wear a mask, indoors and out, regardless of vaccination status.  What did that say to me?  It made it clear that mask-wearing is no longer about protecting anyone from the CCP Virus, but about Social Control, just like Communist China, where the virus originated.  Here is what greeted us outside the entrance to the Fair yesterday. 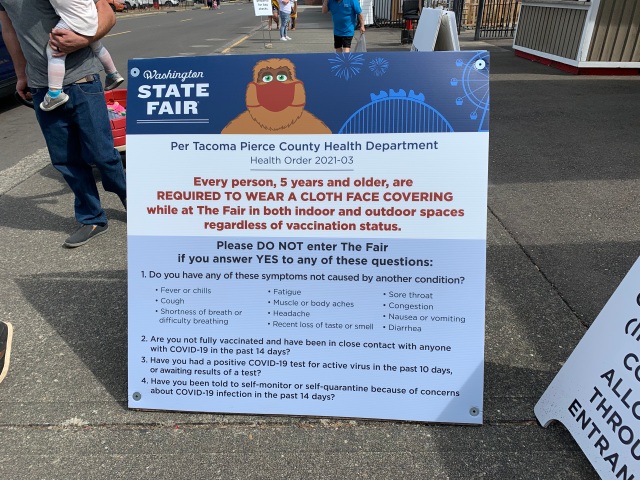 Please remember this sign, as it will be important later.

I wore a mask to pass inspection at the gate (where we had to pour out the water in our bottles, TSA-like), but removed it the moment we were inside, and did not touch it again while we were at the Fair.  An article in a local news site had said that Private Security would be enforcing the mask mandate, but I did not see any evidence of enforcement, and we walked all over the grounds for over four hours.

We started at the amusement-park area of the grounds.  The rides were very colorful, with the usual screaming riders everywhere.

With the year off, it looked like the owners of all the rides had taken the opportunity to spiff them up, and everything we saw looked freshly-painted.

Now, about that mask “mandate” that I ignored.  Many people, in fact, most fair-goers did observe the masking rule, in spite of the 80-degree heat! 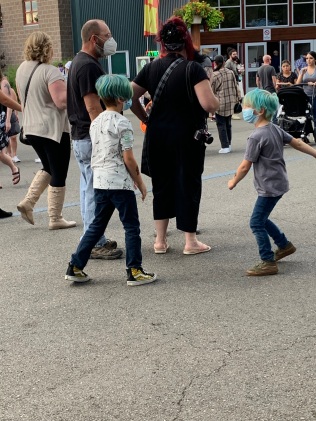 However, there were a considerable number of “rebels”, like me, walking around undisturbed by any “security” enforcing the mandate. 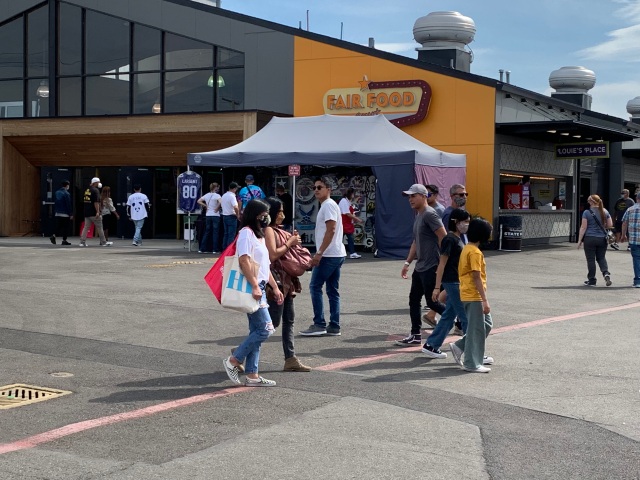 After about the first 15 minutes, I ceased to worry about any mandate being enforced, even when inside the buildings.  No one, but no one, said a word to me about putting on a mask, even the people at the food booth where we bought our very good sausage and strawberry lemonade.

I did, however, see evidence of the reduced number of vendors, which the fair management touted!  They thought they were making us more comfortable being with all those [infected, dangerous] strangers.  But it said to me that I would be unhappy that so many vendors would be denied the income from the Fair, which pretty much has to last them much of the year.  How many of those excluded vendors would never re-open, like all of the small businesses ruined by the government closure requirements?  One of the big vendors, since 1930, is the Sales Family.  They put their all into the Fair, but this year we were confronted with this.

The Grammar Cop in me just had to take a picture of this sign.  ARRGGH!!!!!

And, now that I read the sign more carefully, I spot two misspellings!!  Can you find them both?

One of the main purposes of the Fair is to display Washington agriculture, and this sign was informative.

And we did get to see the famous Budweiser Clydesdales!

In one of the fair buildings, they displayed projects by Washington residents from all over the state.  We were pretty impressed with this contraption, that Hubby pointed out was a human-powered generator, to light up the exhibit.  Pretty clever!

So, after four hours in the heat, and sore feet, we headed home.  One last sight caught my eye in the car on the way home.  Puyallup is in the South Puget Sound area, not too far west of Mount Rainier.  This year, we have had record-high temperatures, over 100 for three straight days in August.  See what that high heat did to the snow on the 14,000-foot high mountain.

It is quite remarkable how much of Rainier’s snowpack was melted by the heat.  I wonder if there will be enough snow this winter to make the entire mountain its normal white again?