Do you take the Moon for granted?  Or are you fascinated by our huge satellite, that is a significant proportion of the size of Earth, making it unique in our Solar System?  Do you look at the Moon through binoculars or a telescope, and wonder what all those craters look like closer-up?  Were you alive in 1969 when American astronauts were the first humans ever to set foot on the Moon?   Did that feat make you a space-flight enthusiast?

I was alive in 1969, and remember watching on TV as Neil Armstrong walked on our closest space neighbor.  Since then, not one other country’s astronauts have walked on the Moon, though Communist China and India are preparing to send their own astronauts there.  For decades, America has not had the initiative to return to the Moon, but that is changing rapidly.  NASA has just launched the spacecraft Artemis I on a journey to test the systems that will be used to again send Americans to the surface of the Moon.  And NASA has published some remarkable photos taken by Artemis, of itself, the Moon, and Earth.  Here are some.

This spectacular photo is the side of the Moon that Earth never sees, the Far Side.  And that’s the spacecraft taking a selfie!  Just think, whenever you look up at the moon, this view is hidden from you.  It gives me shivers. 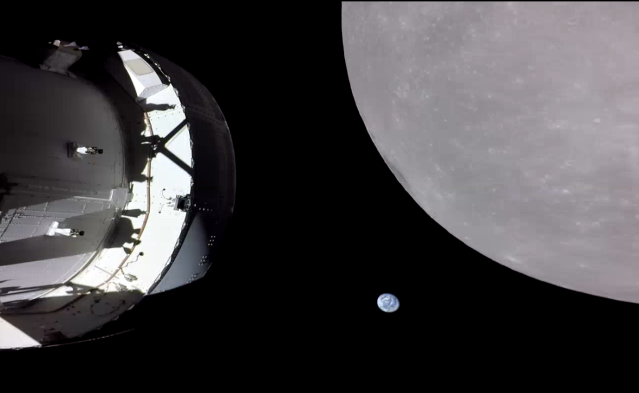 This photo shows the Moon, and Earth.  Wow.  Per the info on the NASA web site, this is “Earth-set”.

Just think how much science and engineering talent and ingenuity went into that spacecraft and all its delicate instruments and cameras, showing us what our planet looks like from space.  God Bless America, and all the humans who worked on this enormous project, which will eventually return Americans to the Moon, advancing our knowledge of our Universe.