The week after Labor Day, Hubby and I flew to Reno for a meetup with our friends from Ricochet.  Getting there and back wasn’t half the fun, but it was interesting.  Since we waited until the figurative “last minute” to book our flights from Seattle, we had to change planes both ways.  For three legs of our journey, we flew aboard a rather unusual aircraft (to us), a Bombardier Q400. 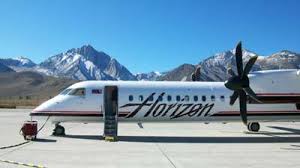 When was the last time you had to board your aircraft from the ground?  And hand your carry-on bag to the crew to store in the belly of the plane, returned to you when at your destination?

It was surprisingly comfortable, with 2 by 2 seating, and a fairly low noise level while in flight.  It’s a little weird, however, looking out your window and seeing the landing-gear retracting into the engine housings!  The funny-shaped propellers were fun to watch, as they speeded up from taxi to takeoff to full flight speed.   For the first two legs of our journey, the sky was so clear that we could see the ground all the way from Seattle to Reno.  Instant geography lesson!

All our flights were uneventful, and we landed in Reno ahead of schedule on Wednesday evening.  Thursday, we drove our rented car all the way around Lake Tahoe.  But first, we had to get to the lake.  That is done by driving directly over a mountain, Mt. Rose, on Nevada Highway 431. Picture-taking fool that I am, we stopped at many roadside turnouts to take pictures.

Also, my “Grammar Police” persona took over at the Summit when I read their sign.  Can you find the two misspellings?

So we got to the bottom, and there is a T intersection.  Which way to go?  We chose left.  The first pretty place we found was a state park, and a trail down to Hidden Beach.  Some of the plants we saw were very beautiful-even the ones that looked “dead” didn’t turn out to be.  I’m not much of a botanist, so if readers can tell me what they are, I’d be delighted.

So, on we drove.  I could kick myself for not having taken pictures of the Nevada/California border, on the south shore of the lake.  Nevada, of course, has legal gambling everywhere.  And I do mean EVERYWHERE.  Every retail establishment, restaurant, and bar has gambling machines in view.  On the south shore of the lake, the Nevada side is lined with big casinos on both sides of the highway, with all their flashing lights.  The moment you cross the California state line, zero casinos.

The highway on the California side tends to be higher above the lake level.  We stopped at a big rest area/overlook high above Emerald Bay, and I got a lot of nice shots.

I’m betting lightning caused the damage to the tree above.  Just twisted right off.

That pine cone is about the size of your hand, and weighed a lot more than it looked.

The California side of Lake Tahoe is much more built-up with residences that the Nevada side, so more of the property is private.  We did spot a lot of private docks, forlornly out over what used to water, and now is beach.  The lake level is way down due to the drought.

Friday, we met up with a couple of our Ricochet friends, and took a nice drive up to Virginia City, in the hills to the east of Reno.   I regret not having our friend take a picture of me with the Dodge pickup truck.  The step was about at the level of my hip, and, to my embarrassment, I had to be helped to get in.

I saw my first wild mustang:

Virginia City is mostly a tourist trap now, but many of the old buildings have been nicely restored.  1880’s buildings, 21st-century transportation!

We stopped here for a beer.  That Dirty Mucker Stout is excellent!

We took a tour of an abandoned mine, whose entrance just happened to be in the back of a local bar.  Really.  This is a hydraulic drill, used at the mine to knock the gold-bearing ore free.  The tour guide, who looked and talked like he had just stepped out of a dime novel of the time, told us that many miners were injured by this kind of equipment.

Saturday was the day of the official Ricochet functions.  In the morning, we headed back over Mt. Rose for the first of the day’s activities, which was golf at the Old Brockway Golf Course, in Kings Beach, California.  Now I do not play golf, and hubby hadn’t played in years, but our local host insisted.  So we had two carts, and for me a nice trip around the course, watching the guys hit those little balls with the metal sticks.  I did get some nice golf-course pictures.

This hole was especially difficult, and it was on two separate levels.  This sign was spotted off to the side of the course.

End of the Trail.

Saturday night was the official Ricochet Meetup Dinner, at the Hyatt Lone Eagle Restaurant in Incline Village.  We had hoped to get a table outside to have pre-dinner drinks and relax at the beautiful lake, but our plans were upset by two different problems.  First, there was a big wedding party there, and they took up nearly the entire bar and most of the restaurant, including all the outside tables. Remember that pretty shot of the lake with its clear water and view all the way across?  Well, this is what the lake looked like on Saturday night:

Can you say “socked-in”?  The smoke from the wildfires in California cast a pall over a goodly portion of the Nevada side of the lake.  So much for beautiful lake views.  We were lucky to see the lake on Thursday.  Everyone had a great time at the dinner, and the food and drinks were excellent.  Definitely a place not to miss if you are in the area.

On Sunday, it was time to head back home.  We had some time, so we went downtown in Reno, to check out the new Riverwalk neighborhood.  Due to the smoke in the air, and construction, we didn’t see much.  Here’s what we did see:

Back on the plane again, first to San Jose, then Seattle.  I finally got a window seat, and my trusty iPod camera.  No smoke above the clouds.

Altogether a very nice trip, and we made some nice memories.

One thought on “A Trip To Reno-Lake Tahoe”