At least, that’s how I thought of it at the time, and for a long time thereafter.  The year was 1971.  I had just graduated from Washington State University with a degree in Psychology.  I had applied to graduate school, and had been accepted at the University of Minnesota.  So, how was I supposed to get from Seattle to Minneapolis for grad school?  We discussed it in the family.  I would need a car, but had almost no money.  I was offered my mother’s 1962 Chevy II, 4-door car, to drive myself to school.  Now, my mother never took the car anywhere but to the local stores and maybe downtown once in a while, so it got next to no highway driving.  And since it never got many miles, it never got much service either.  Oil changes and inspections were a rare occurrence, so needless to say it was a mess inside.  Here is a picture of what my transportation looked like.  The car was even this color (brown, so it wouldn’t show the dirt, according to mom). 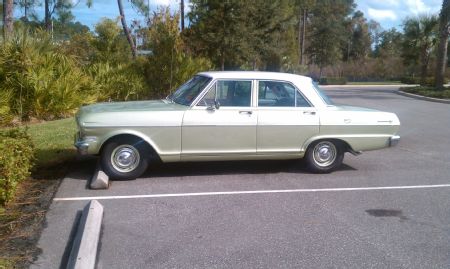 Larry, my boyfriend, was a whiz at working on cars, so he spent a couple of weeks under and inside the car cleaning up and fixing everything he could think of that might go wrong.  He replaced all the belts and hoses, replenished all the fluids, and inspected all the working parts that he could.  There was not much he could do about the engine, which sometimes made funny noises that no one could trace.  I never felt confident driving it, expecting something to blow up or drop off.

I went down to the local AAA office, and had one of their people draw me up an itinerary, with all the highways and stopping points marked.  It seemed to me to be a pretty complicated plan, including lots of back roads and not many freeways.  But I did it their way with no complaints, because I didn’t know any better.  I applied for, and was granted my very first credit card, from Chevron, so I could buy gas on the trip.  I took a big sheaf of American Express Traveler’s Checks to pay for meals and motels on the trip.  I had no idea how and where I was going to live in Minneapolis once I arrived there.  My father had a distant relative who lived in a near suburb, so he contacted them, and they arranged to put me up at their house until I could find an apartment near school to rent.

So, in mid-August, I packed up all my worldly goods in the old car, and set out for Minnesota.  All by myself.  Knowing no one, never having driven a tenth that distance alone.  And in a car I hated, and feared that it might break down.

The first couple of days were uneventful.  It was midsummer, and hot, and the old car had no air-conditioning, so I was fairly uncomfortable.  Funny, but I made it to Montana before I had any sort of trouble.  I had spent the previous night in Great Falls, and was puttering down the two-lane highway when something went “BANG”, and the car simply stopped.  My greatest fear had been realized.  Here I was, in the wilds of rural Montana, with a car broken down.  Fortunately, it was early in the day, around 10AM.  Remember, this was before mobile phones were ubiquitous.  There was a farmhouse a short distance away, and I was getting ready to lock up the car and walk there to see if I could use their phone to call AAA.  Just then, a bright red Ford station wagon drove by, and slowed down.  The driver noticed me by the side of the road, and stopped to see.  It was a traveling salesman, and he did have one of those newfangled car phones.  He called AAA for me, and it turned out that the nearest town had a Chevy dealer, who had a tow truck. So we arranged to have the Stanford, Montana Chevy dealer tow my car into town.

I rode in the cab of the tow truck, and in speaking with the driver, it turned out that I had been really lucky.  They were about to take the tow truck out of service for its own maintenance, and I had called just before that was to happen.  When we got to town, there were lots of things to do and decisions to make.  While I waited, the car was put up on the rack, and they determined that my problem was a broken timing gear, which would require a new part.  The dealer did not have it in stock, so it would have to be ordered.  So I needed to find a place to stay while the car was being fixed, and money to pay for it.  I phoned home, and appealed to my parents for help.  Again, Dad to the rescue.  It turned out that the widow of an old Coast Guard buddy of his lived in Great Falls.  He called her and asked if she could put me up while the car was being repaired, and she said yes!  Her 18-year-old son was home for the summer, and he drove down and picked me up.

Well, he and his mother turned out to be interesting people.  They lived in a very nice home, which all I can remember of now is all the kitchen appliances were turquoise!  Oh, and they were never used, and mother and son ate out for all their meals.  I stayed there for the six days it took to fix my car, and then the son drove me back down to Stanford.  I charged the repairs on my Chevron card, and that was about my credit limit.  So I was on my way, with a repaired car, no air-conditioning, and a load of anxiety that I hadn’t had before.  One more thing.  My new schedule now put me right behind the Montana State Fair, so for the next couple of nights in Montana, the places I stopped for the night had few motel rooms available due to the fair (which moved from town to town).

The remainder of my trip was horrible, hot, and anxious.  One of the few good things I remember from then was the terrain in Judith Basin County, just south of Great Falls-I thought it was beautiful.  My car troubles weren’t over, since it needed a new thermostat, which was replaced in Gillette, Wyoming.  I drove across South Dakota next, and sweltered.  As I was coming into Sioux Falls, it started to rain.  With the outside temperature over 90, it was either roast with the windows up, or get wet while leaving them open.  I left the windows open and got wet.  In all this time, too, I hadn’t slept very much at all, so I was about as miserable as I could be, alone in a strange place, knowing no one, and worried that I was running out of money.  I was able to call home, and I spoke to Larry.  It was good to hear his voice and tell him my troubles.  He told me that I was having an anxiety attack, but had no words of wisdom about how to cure it.

I crossed into Minnesota, and drove north toward Minneapolis.  The last town on my route was Mankato, and as I drove through town, I realized that I was driving in the middle of a parade!  Just what I needed, to hit town in the middle of their annual Corn on the Curb Festival, celebrating the town’s most important product-corn!  Indeed, many people were sitting on the curb, eating corn on the cob.

I made it to Minneapolis, and managed to find the home of my father’s distant relatives.  They lived in Saint Louis Park, and their house was nice.  However, they were not.  I discovered very early on that they really didn’t want to host me, and they made every effort they could to kick me out as soon as possible (which didn’t help my mental state one bit).  I then went apartment-hunting in the city, and managed to find a tiny basement studio apartment only a few blocks from campus.  I moved my stuff in there, and tried to find out how to cure my anxiety which had not abated at all.  Since school was not yet in session, I couldn’t use the school medical facilities.  What cured me?  Finding a friend!  I struck up a conversation with a young man who lived in the same building, and the next night I got my first good night’s sleep in weeks.  I considered that the end of the Road Trip From Hell.

Note:  In the mid-1980s, Larry (now my husband) and I took a driving trip through Montana.  We made a point to stop in the tiny town of Stanford, and visit the Chevy dealer.  It turned out that the dealership was now run by the son of the owner when I passed through, and he was pleased to hear that I had remembered them.

2 thoughts on “The Road Trip From Hell”