Ever since I can remember, Smokey the Bear has been telling us that only WE can prevent forest fires. 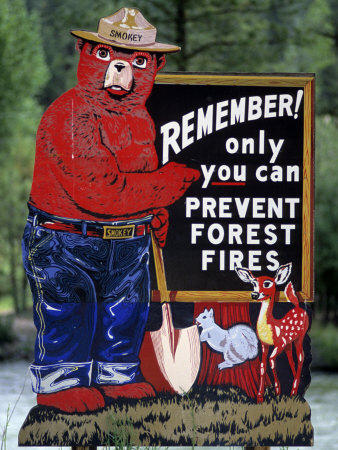 So, who told Smokey that the Prime Directive was to Prevent Forest Fires?  Well, since the 1940s, the US Department of Agriculture used him to prevent Human-caused fires.  In later years, Environmental Wackos did their best to make sure that the National Forests remained in their pristine condition.  They did this by basically putting the forestry profession as much out of business as possible, to “preserve” the National Forests for whatever endangered species they could find.  Humans were considered destroyers of both forests and wildlife.  So national policy discouraged logging in national forests for many years.

The result of this enlightened policy was entire regions decimated by the logging companies put out of business.  On the Olympic Peninsula in Washington State, towns like Forks which had had thriving economies were deprived of their ability to support their people.  Unfortunately, when evergreen forests are not thinned, and fires are prevented, they build up heavy loads of underbrush, which in summer are fire hazards.  Another plague that has hit especially Western National Forests has been the pine bark beetle, which thrives on the wood of Ponderosa and other pine trees.  The dead trees killed by the beetle remain dried-out, and standing among the live trees, just waiting for that bolt of lightning.  Here is a picture of a forest in California.  The red trees were killed by the beetles.

And here is the slope of Mount Rushmore.  See the dying trees?

So I have come up with a proposal that should be a win-win-win situation.

First, the Federal Government should hold regional auctions, covering portions of the National Forests.  They would auction off, to the highest private-sector bidder, the rights to log their territory, ONLY removing dead or dying trees, and dry underbrush.

This type of auction would have many beneficial effects.  First, it would bring in money to the government, to help it manage the National Forests.  Second, it would improve the conditions in the forests, as dead and dying trees were removed and fire danger thus reduced, and the remaining trees would be healthier overall.  And Third, it would create jobs in the forestry industry, allowing professional logging companies to get back to their work, and reviving the economies of Western towns that used to depend on logging for their livelihoods.  Those loggers could sell their wood wherever they could find markets, and furniture-makers and others would have a large supply of wood with which to create products.  So everyone, except maybe the Environmental Wackos, would benefit.  Finally, society as a whole would benefit from the sight of forests that are greener and healthier.