On April 25th, my husband and I flew from Seattle to Nashville, for a Hillsdale College National Leadership Seminar, and to do some sightseeing and meeting with our friends from Ricochet.  I had the window seat, and I was fortunate to be able to see the ground for most of the four-hour flight.  You want to talk details?  You haven’t seen America until you have seen it from an airplane 30,000 feet above the ground.  I just wish the pilot had let us know where we were!  I took all these pictures with my iPhone camera, and many times I just had to guess where we were.

Some places were pretty easy to identify.  When we left Sea-Tac Airport, it was partly cloudy, with only some occasional openings in the clouds below, to glimpse the ground.  First, though, this is what I saw when we were getting ready to taxi down the runway.

What a brightly-colored mobile advertisement for the new Hawaii service the airline is starting!

Through that little break in the clouds, you can see the green forests of the Cascade foothills.  A little farther on…

You can see the snow-capped peaks of the Cascade Mountains.  This year was a great one for snowpack, with skiing still possible in late April.

This sight was one we have seen many times from the highway.

It’s the mighty Columbia River in Eastern Washington, and the Tri-Cities of Pasco, Kennewick, and Richland.  The waters of the Columbia provide power for much of the Pacific Northwest, and irrigation for farms in Washington, Oregon, and Idaho.  From here on, I’m just basically guessing where we are. 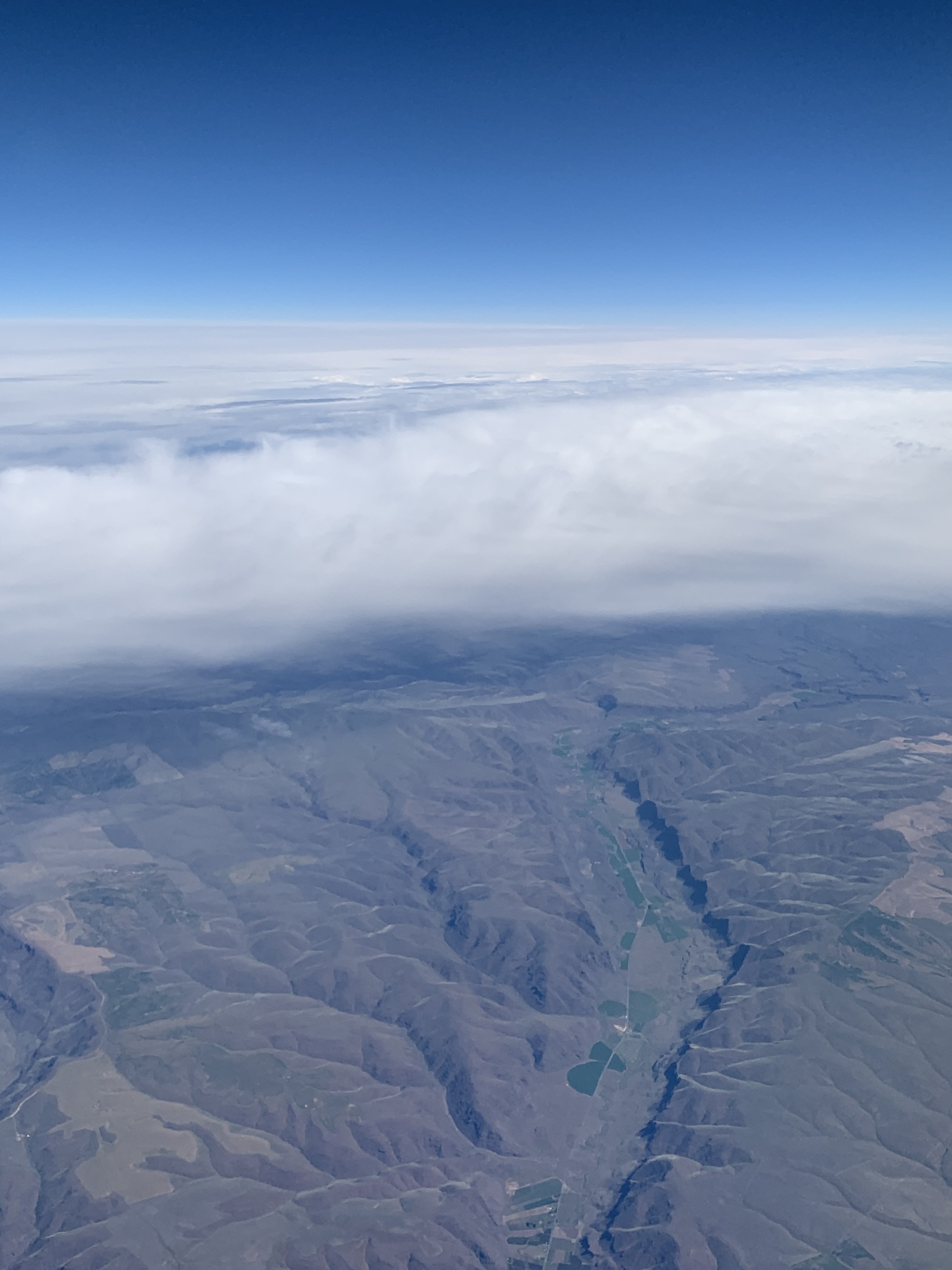 This looks like a huge earthquake fault in Eastern Washington or Idaho.  Look at the green farms along the edge.  People take every advantage of water when they can find it, to grow crops or pasture livestock.

My guess is this is Idaho between the Sawtooth and Bitterroot Mountain ranges.  I don’t know what the river is, but you can see the canyons the river carved in the valley.

Closer up, you can see how deep those canyons are.  Detail, anyone?

The flat terrain looks like Eastern Montana to me.  I have been there many times, and I just love the land there.  Not featureless by any means.  Detail?  In the upper half, you can see the round fields, created by the center-pivot irrigation used by many farmers. 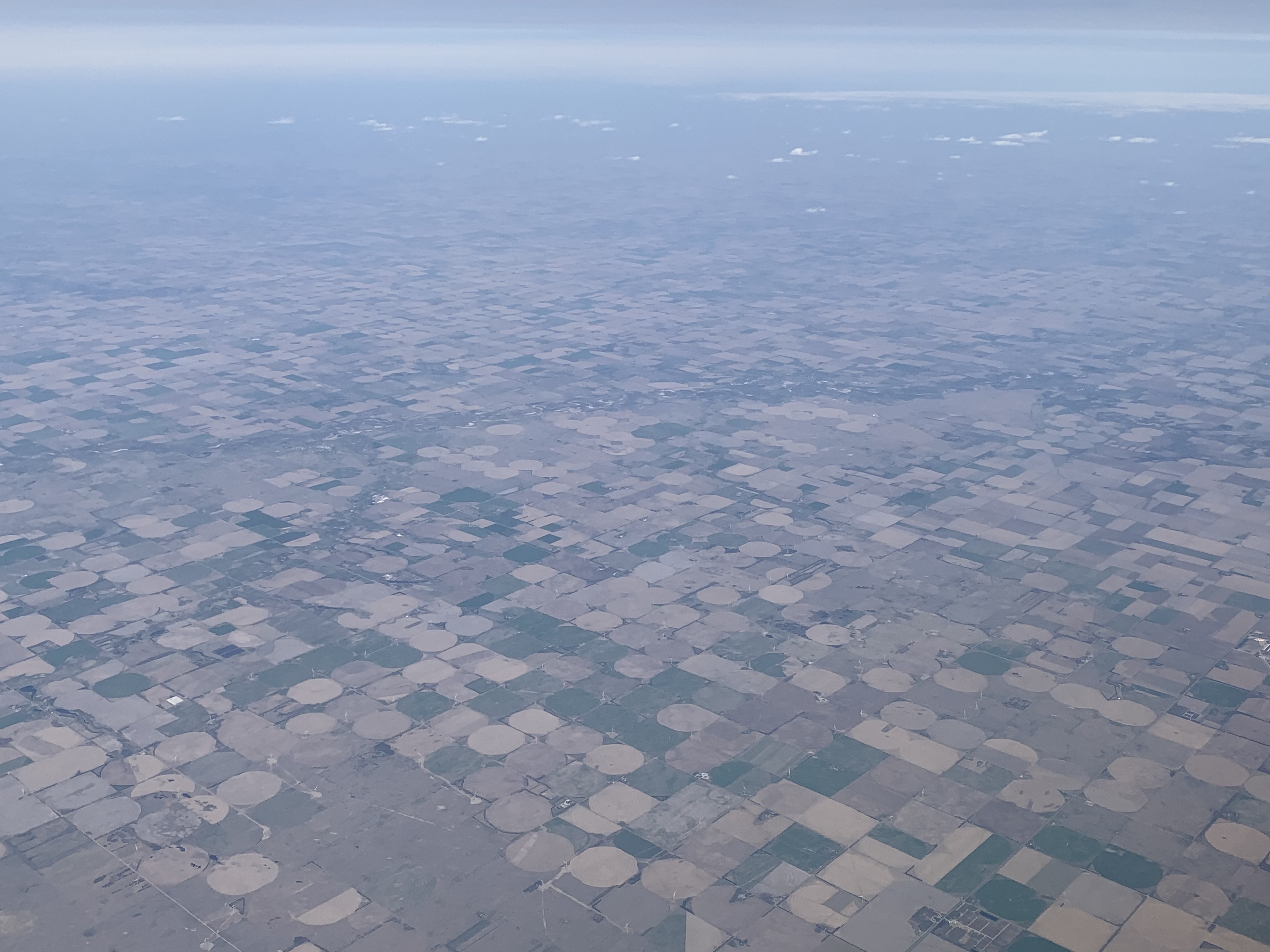 Farther East, the land is getting increasingly cultivated, with square and circular blocks of farmland.

In this picture, you can see the big freeway crossing all the farmland, and more than one river.  I see more than one river, too.  Think what Lewis and Clark would have thought, if they could see the land they crossed from this perspective. 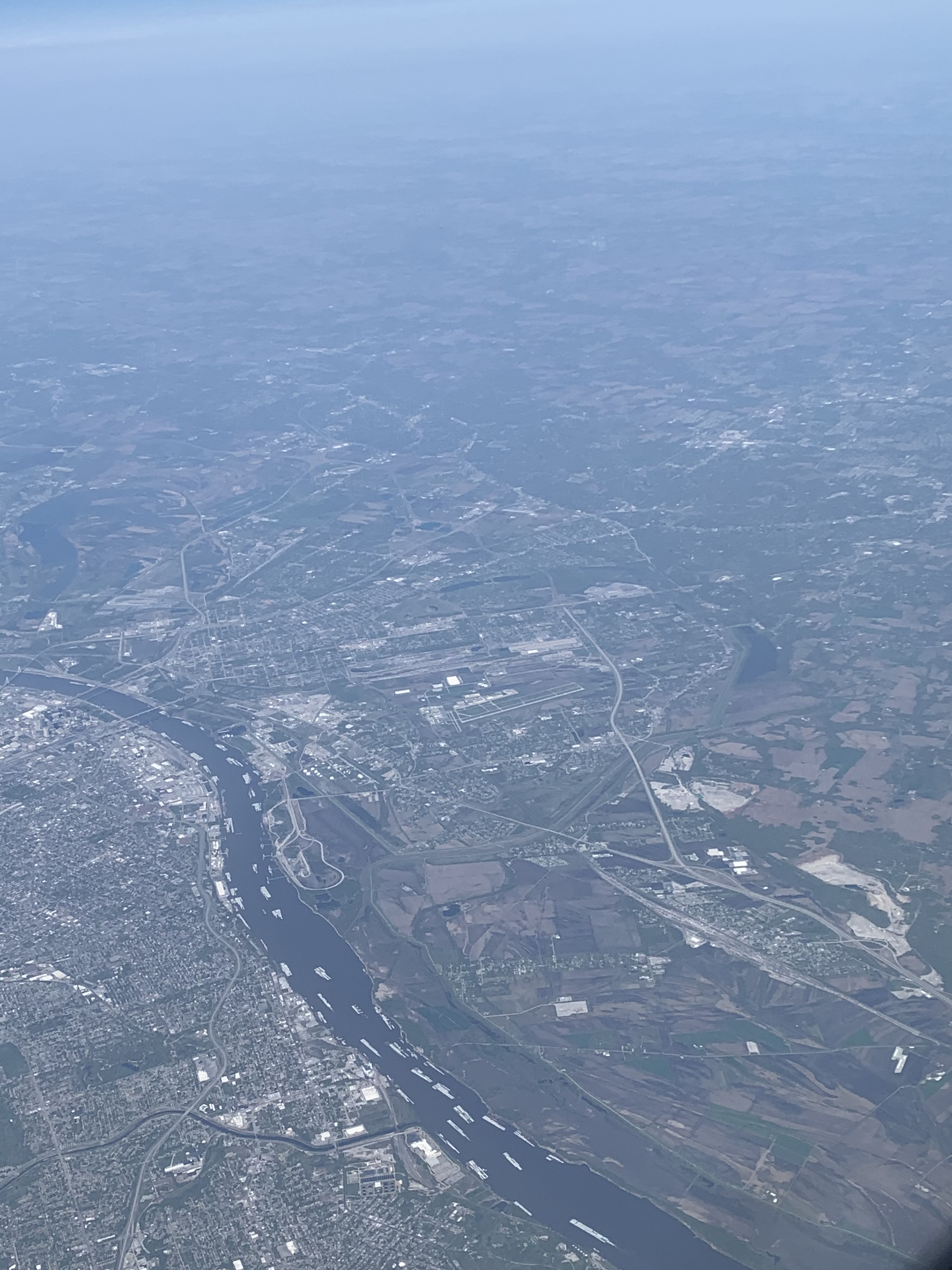 For some reason, the GPS in my phone identified this!  It’s the Maramec River near St. Louis.  See all the barges on the river?  Details, details. 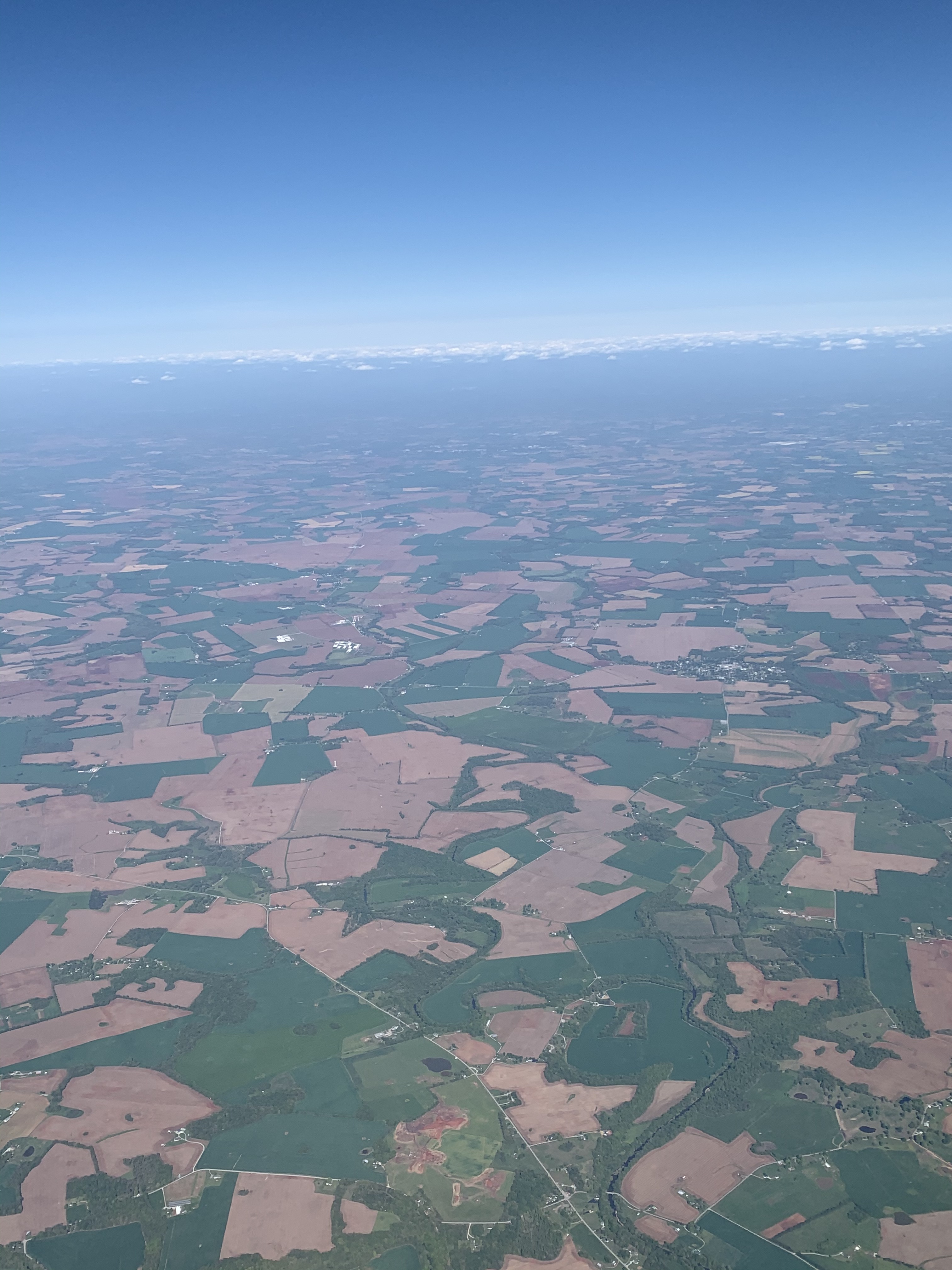 And, finally, the green fields of western Tennessee.  It was a wonderful flight, and I was fascinated by all the details of the landscape of our great country.  The ingenuity of American people, who farmed the land, crossed the mountains and rivers, built highways and dams, and built aircraft so we could travel everywhere, have inspired me for all my life.  I hope these landscapes inspire you, too.

Oh, and I almost forgot a couple of more details from the beginning of our trip.  We were notified by the airline of their extremely strict masking rules.  I laughed, when I saw that they expect passengers to wear a mask at ALL times during the flight, and that means ALL.  Even while eating, passengers are expected to keep their mask on between bites of food.  See below for confirmation.