Curtis Institute of Music in Philadelphia is one of the world’s most Special Places, in more ways than one. First, it is one of the most prestigious music conservatories, founded in the 19th Century and still going strong.  Second, it charges its students no tuition.  Third, it only accepts the very tip-top of applicants, making it more selective than any Ivy League college.  Fourth, its list of alumni includes many of the music world’s most famous people:

Among many, many others.  I learned about Curtis sometime in the 1990s when I was taking violin lessons and playing in a string orchestra.  One of the teachers I met turned out to have gone to Curtis, and studied viola with Max Aronoff.  I started donating to them, just because I saw what wonderful things their students had done, and after I took a tour there with a boyfriend who lived in Philadelphia.

That got me on their mailing list, and in 2014 I got a notice about their summer adult music “camp”.  My husband and I decided it would be fun to go, so we signed up.  The camp lasted about half a week, and it was great fun.  We played in chamber groups, and my hubby played clarinet in the orchestra.  Here are some of the photos I took during that fun week.

That is the old school building, and it’s really beautiful inside with dark wood paneling.  The building has held up pretty well through the years, too.

That’s my violin.  I thought it went well with the wood on that window ledge.

We had a nice double room in the new student dorm.  I thought the name badges for the door were very clever.

That’s my little chamber group.  We played a piece by Telemann for four violins.

And there’s my part!

The new building had a very nice dining hall where we had our meals.  We often got to talk with the faculty members as well as the students. 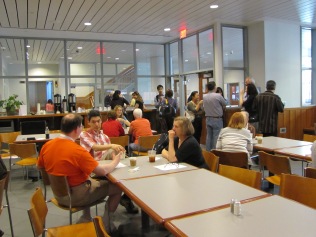 Cafeteria was conducive to conversation and meeting fellow attendees and faculty.

Participants converse in the Lenfest Hall cafeteria after lunch.

The final concert was where we got to hear all the music everyone was practicing.  There were many small groups, and the orchestra played two short pieces.

After the concert, there was a reception on the very nice roof deck of the new dorm building.

That’s a group of the ladies who attended.  Everyone was delightful.

Summerfest wasn’t all work.  We did get some free time to visit Center City Philadelphia where the school is located.

I was especially taken with a tall apartment building across the street from the school.  It looked like all the apartments had bay windows, which would ensure that they got lots of light.

We loved being there, and felt like were in the presence of greatness, even though none of the really famous people were there.  We still have contacts at Curtis, and we hope to go back there sometime soon.

One thought on “Lens-Artists Photo Challenge #188: A Special Place”