We have just returned from a two-week road trip, which took us through the states of Washington, Oregon, Idaho, Montana, Utah, Wyoming, and Colorado.  In none of those states did we encounter a mask mandate.  In every state we stopped in, we found some people wearing masks in public (higher percentage in WA than any other state); and few people wearing masks indoors at the Hillsdale College function in Colorado (they were mostly elderly).

But I did come across a piece of genuine Covid madness at the Florissant Fossil Beds National Monument in Colorado, and it felt like a sucker-punch.  I came across a defaced photograph from the 19th Century.  And Defaced is the proper word for this photograph of a woman who died over 100 years ago.  I never would have seen it, if I had not been waiting in the lobby of the visitor center for Ray to get back.  They had a slide-show on an overhead monitor, and I really couldn’t believe my eyes when this one came up in the rotation. 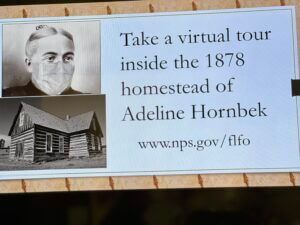 I don’t even have to ask who approved this defacement of an old photograph, since this is a federal site (National Park Service).  What possible purpose could there be for defacing this photograph of an early homesteader in Colorado?  No response is sufficient for this pure madness.

[originally posted at Ricochet.com, where it has been promoted to the public-facing Main Feed]

One thought on “Covid Madness on our Road Trip”