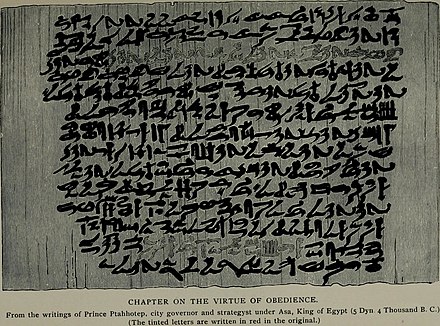 In my reading and listening, I came across a set of words of wisdom that very much impressed me.  Reading them, it seems like the one who said them had a very good grasp of morality, and human behavior.  The wise person who handed down these words was an important person, and wanted those who came after him to benefit from his knowledge.  After reading the words below, can you guess who he might have been?

If you are a leader, take responsibility in the matters entrusted to you, and you will accomplish things of note.

If you are a man of authority, be patient when you are listening to the words of a petitioner;  Do not dismiss him until he has completely unburdened himself of what he had planned to say to you.

Great is the Law.

All conduct should be so straight that you can measure it with a plumb-line.

Injustice exists in abundance, but evil can never succeed in the long run.

Punish with principle, teach meaningfully. The act of stopping evil leads to the lasting establishment of virtue.

Those whom God guides do not go wrong. Those whose boat He takes away cannot cross.

If you work hard, and if growth takes place as it should in the fields, it is because God has placed abundance in your hands.

Do not gossip in your neighbourhood, because people respect the silent.

As for the ignorant man who does not listen, he accomplishes nothing. He equates knowledge with ignorance, the useless with the harmful. He does everything which is detestable, so people get angry with him each day.

Only speak when you have something worth saying.

As for you, teach your disciple the words of tradition. May he act as a model for the children of the great, that they may find in him the understanding and justice of every heart that speaks to him, since man is not born wise.

Love your wife with passion.

How wonderful is a son who obeys his father!

Do not repeat a slanderous rumour, do not listen to it.

He who has a great heart has a gift from God. He who obeys his stomach obeys the enemy.

So, can you guess who promulgated these words of wisdom?

The speaker of these words of wisdom lived from about 2375-2350 B.C.  His name was Ptah-hotep, and he was the Vizier to King Djedkare Isesi of the Egyptian Fifth Dynasty.  I thought how remarkable it was that his words of wisdom still bear the same meaning today, nearly 5,000 years after he died!  It just goes to show you that human behavior remains the same.  Here is what he looked like.

I learned about this great man from the Egyptian History Podcast, which I recommend to everyone.

3 thoughts on “Who do you think said these words of wisdom?”