How does anyone choose between Dementia and Communism? Trump 2020. 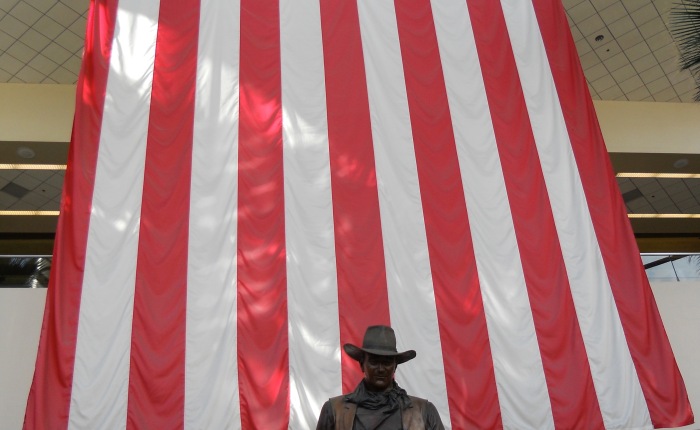 Every day, I give thanks to have been born in the Greatest Country on God’s Green Earth.  Our country is one of the most beautiful on Earth, with terrain ranging from blazing hot deserts, to grassy prairies, to high snow-capped mountains, to chains of beautiful blue lakes.  The American people are the most generous in the world, voluntarily supporting thousands of charities in the US and doling out the largest share of ANY country, of aid to needy folks in foreign nations.  The Left in the US likes to portray everyone other than themselves as racist, sexist, bigoted (fill in the blank)-phobes, who are only out for themselves, literally taking food from the mouths of needy babies everywhere.  But we’re not.  So, herewith, is a celebration of the beauty of the United States of America, and its people.

Western Washington, this is Deception Pass, looking East from the (scary) Deception Pass Bridge.  That’s Mount Baker in the distance.  You can see why Washington’s nickname is the Evergreen State.

Boats in Friday Harbor, on San Juan Island, in the Straits of Juan de Fuca (separating the US from Canada).  Millions of families in Washington own boats, from simple rowboats and small motorboats to huge yachts, and sailboats.  Puget Sound is crowded with boats on any sunny summer day.  I know a rabbi who has seven children, and his big extravagance was a motor boat, on which he and his family traveled whenever they could get away.

This is Diablo Lake, in the North Cascades.  It’s about a one-hour drive there from our house, and we love to go on a day trip when the weather is nice.  Out of view is Diablo Dam, which provides hydroelectric power to the Greater Seattle area.  I have always marveled at the ingenuity it took for people to design and build a hydroelectric dam.

And the people.  This is a crowd of accordionists, at the Gazebo in Leavenworth, Washington, at the Leavenworth International Accordion Celebration.  Players ranging in age from 7 to 77, playing music for the sheer joy of it.  And there is as much variety in the accordions as in the players.

The Eastern part of Washington State is much drier than the Western part, its landscape showing the effects of receding glaciers, and ancient floods.  Millions of years ago, this was a giant waterfall.  Nature sculpts for us to admire.

Even in the harshest desert climates, plants grow, and feed birds, insects, and other small animals.  This is the Desert Botanical Garden in Phoenix. 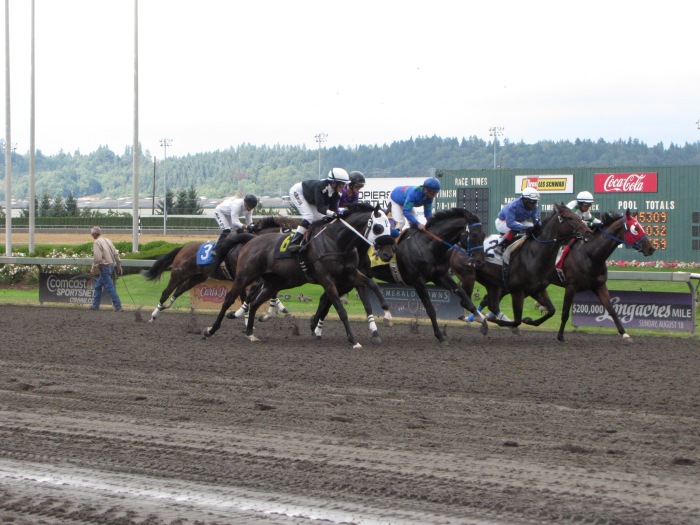 There are places where people like to gather, to place their bets, and to just marvel at the beauty and power of thoroughbred horses.  The Sport of Kings, indeed.  Emerald Downs, near Tacoma, Washington.

Of course, a celebration of America would not be complete without a stop at the Grand Canyon.  Think about it.  Through millions of years, the Colorado River carved the Grand Canyon.  Remarkable what running water, and time, can accomplish.

And friends, from all over this country, meeting for the first time on the shore of Lake Tahoe.  Ricochet Meetup. 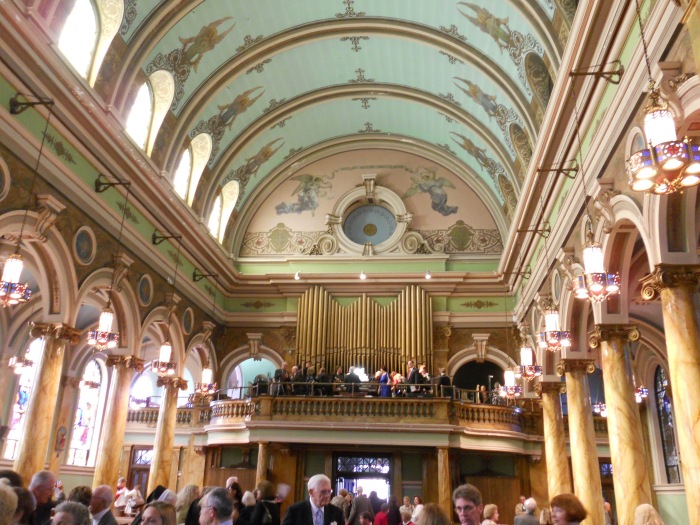 Another National Treasure.  Saint Joseph’s Polish Catholic Church, Camden, New Jersey.  Celebrated its 120th anniversary in 2012.  Polish-language Mass is still celebrated here daily, by the Polish priest.  The parishioners and former parishioners at Saint Joe’s have supported it, and kept it maintained in all its glory for a very long time.

Proof that even amateurs can make it to Carnegie Hall.  We went in the summer of 2006, and played Gershwin’s Rhapsody in Blue, and William Grant Still’s Afro-American Symphony.  You can spot me right in front of the tympani.

I just couldn’t let this opportunity get away.   Me, in my Rush Limbaugh Club G’itmo t-shirt, in front of the Democratic Party booth, Fourth of July in Albany, New York.  Sometimes, if you search on RushBabe on Google, this picture appears!

From Sea to Shining Sea.  The Atlantic Ocean at Cape May, New Jersey.

Celebrating the Magnificence of the United States of America and its people.

What about this Black Life?

Did you know that over 60% of black babies are aborted?  Yes, SIXTY PERCENT!  This evening, I discovered an interesting Web Site called Black Genocide.  Give it a look.

This simple fact shows that so-called Progressives do NOT believe that Black Lives Matter. In truth, the fact that Abortion is the Holy Sacrament of Progressive Doctrine, shows plainly that NO lives matter to them in the end.  Democrat Voters matter to them, but only until they get elected and have absolute control over your life, and everyone else’s life too.

So don’t for one minute believe that Black Lives Matter.  To those who spout the progressive talking points, black lives are just as worthless as any other.

Let’s see.  In the past couple of years he has met with, and praised:

A Saudi Prince, of a kingdom that represses its women, stoning them to death for “honor crimes”.

He has done his best to release “detainees” (brutal terrorists) from Guantanamo Prison, allowing them to  return almost immediately to their grim business of murdering innocents.   Courtesy of TruthRevolt:

His “legacy” includes signing an “agreement” with the brutal dictators of Iran, lifting sanctions and releasing billions of dollars of frozen funds.  This will allow them to continue with their march to a nuclear weapon.  Meanwhile, they capture US sailors whose boat accidentally “invaded” their waters, and humiliate them.

He decided, unilaterally, to reopen relations with the brutal dictatorship of Cuba, lowering barriers to travel and investment.  And all the while, boatloads of Cubans escape from their island “paradise” to freedom in America.  Last week, the president visited Cuba.  Here he is with his buddy. 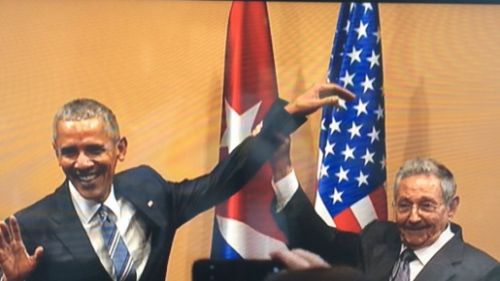 The next day, he appears in a well-sited photograph, right in front of his college “hero”, a brutal murderer and far-left idol. 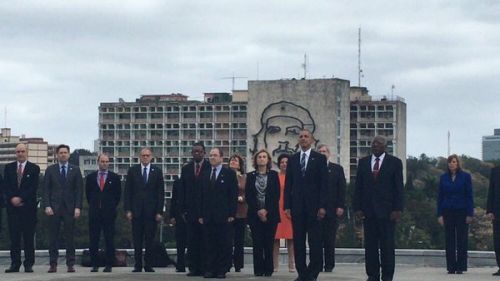 On Tuesday, while radical Islamic Terrorists were blowing up the Brussels airport and a subway, murdering and gravely injuring dozens of innocent people, the president…. attended a baseball game in Cuba.

***EDIT…I just had to add this Ramirez cartoon.  It’s priceless!

So, exactly who is more important to the president?  Brutal dictators?  Or You?

They got the slow dance out of the way, so they could dance to the Persian music.  My nephew married a gorgeous young lady whose family is from Iran.  Her dad gave an absolutely hilarious speech that had all the wedding guests rolling in the aisles.   To the Dance!

Beware of relying too much on the Government Transportation (bus, train) to get you to work.  Be careful of selling your car, and trying to “save the planet” by using mass transportation.  This is what happens:

The Powers That Be in the state of Washington are getting together to “solve” the congestion mess in the Seattle area, and the big “cure” will be getting you out of your car, and into Government Transportation.  They should pay attention to this, as they expand the boondoggle Light Rail.

As long as I can remember, I have always loved the seashore.  I grew up in Seattle, on Puget Sound, an arm of the Pacific Ocean.  In the summer, my sister and I would join our maternal grandparents and our Portland cousins for a week at Seaside, on the Oregon coast.  In the 1980s, I went to music camp at Fort Worden in Port Townsend, on the Olympic Peninsula.  In the 1990s, I went to chamber music camp at Seabeck, on Hood Canal, another arm of the Pacific Ocean.  My boyfriend from those days lived in Port Angeles, on the north Olympic Peninsula, and I visited him often, taking the Washington State Ferry from Edmonds to the Kitsap Peninsula.  In 2003, my new husband and I honeymooned in Victoria, British Columbia, on the Strait of Juan de Fuca.  One of the ways of getting there is from Vancouver, through the Channel Islands on the BC Ferry.  He grew up in New Jersey, and we have visited the East Coast a few times, and seen the Atlantic Ocean on the Jersey Shore.

I never tire of walking along the beach, watching and listening to the sound of the sea, endlessly casting its waves up the sandy or rocky shore.  I remember, many years ago, my first husband described what happened when his uncle from North Dakota first saw the Pacific Ocean on the coast of Washington.  He stood there, transfixed, and then he said….”Just a ‘workin’ all the time…”  We took our first cruise, to Alaska, in May of 2005.  I discovered that what I liked the most about cruising was sitting on the deck of the ship, or in the aft lounge, just watching the ship cut through the water, and listening to the sound of the sea.  I would have been happy never to go ashore!

So here are a few pictures of my favorite places, along the seashores of our Greatest Nation on God’s Green Earth.

Meadowdale Beach Park is at the end of a steep, one-mile-long trail through towering evergreens, and under a shoreside railroad track.  Getting there is more than half the fun.

Edmonds is just a few miles further north along Puget Sound.  Just to the left of this picture is the ferry dock, for the Kingston Ferry.  At the other end of the Kingston Ferry is the Kitsap Peninsula, and the Olympic Peninsula.  One of our favorite places to go on a day trip is the Dungeness National Wildlife Refuge.

There are rarely big crowds, and in the off-season the beach at Dungeness can be pleasantly empty, except for sea birds, like terns, loons, and seagulls.

In 2012, we visited the East Coast, and the Atlantic coast at Cape May, New Jersey.

Hard to believe, this is October.  It was 70 degrees out-very pleasant.  And these fellows greeted us there.

Sometimes you forget that cities can be on the seashore too.  New York Harbor isn’t that far removed from the Atlantic Ocean either.

Last, but surely not least, is one of the country’s more famous beaches, Newport Beach, California.  We were there in February, and it was bright and sunny, perfect for showing off Southern California.  It doesn’t get much more beautiful than that (until you read the sign requiring you to pay for parking!).

I feel very fortunate to live here in Washington State, never more than a few minutes from a seashore.  I can indulge my love for the seashore any time I want to, all year round.

In 2007, my husband and I went to Israel with Michael Medved and his family (he is based and broadcasts from KTTH 770 Radio in Seattle).  One morning, I took a solitary walk to the Old City in Jerusalem, and visited the Western (Wailing) Wall, the remaining remnant of the Second Temple.  Jews come here to mourn the loss of the Temple, and pray for its restoration.  Many worshippers write their prayers on tiny slips of paper and insert them between the stones, to speak for them after they have left the area.  I felt the wailing, and the prayers, and the anguish of my people-tears came to my eyes.  I placed my hand on the wall to feel its power, and took a picture with my camera.  This is a constant reminder of my visit, and my heritage.  Harmony-connected to the reminder of the 2,500-year history of my people.

This picture has a sound-track, too.  I have always loved this “round”, Don McLean singing “Babylon”.  Words from Psalm 137.

This is a bigger picture of the Wall, and the worshippers.