The first week of October, Hubby and I flew to Michigan, to attend the Hillsdale College 175th Anniversary Gala, and the dedication of the new Christ Chapel.  The weather was fine on the flight out, and we got to see Mount Rainier from above.

We arrived in Detroit, picked up the rental car, and headed south toward the town of Hillsdale.  It was a beautiful day for a nice drive.  We stayed in the town of Coldwater, about 30 minutes south of Hillsdale, due to the fact that Gala attendees had taken up ALL of the available hotel rooms for miles around!  We learned that there were about 800 people there, and around 600 on a waiting list, which just blew our minds.  The Hillsdale Campus had never entertained that many people at once.

When we arrived in Coldwater, this retail store caught my eye immediately, and I told Hubby that I just had to get a picture.  What with Dick’s Sporting Goods publicizing their decision to stop selling guns, this was an interesting sign in the front windows. 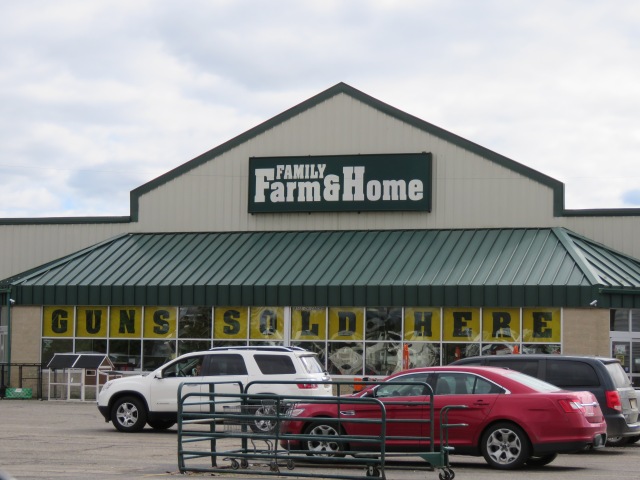 Our Second Amendment-supporting friends got a kick out of this.

The following morning we were rousted out early, since the first program started at 9:30AM. We grabbed a bite to eat before they finished up the breakfast buffet, and headed over to the Searle Auditorium to hear a presentation on the new Hillsdale Master’s Degree in Classical Education.  Hillsdale is doing their best to encourage real education, not the progressive indoctrination most kids get these days in government schools.  This new program will help train the right kind of teachers.  Next, we heard a great presentation on the School of Government.  Would that all politicians could be educated at Hillsdale!

Lunch that day was quite elaborate (like all the meals at the conference), with carefully-plated dishes that looked very artistic. Are we supposed to eat this?

We were fortunate to meet up with our Ricochet friends Susan and Jerry from Florida.  We got to sit with them at all the meals except the last one.  You can get an idea from this picture of how many people there were at this celebration. 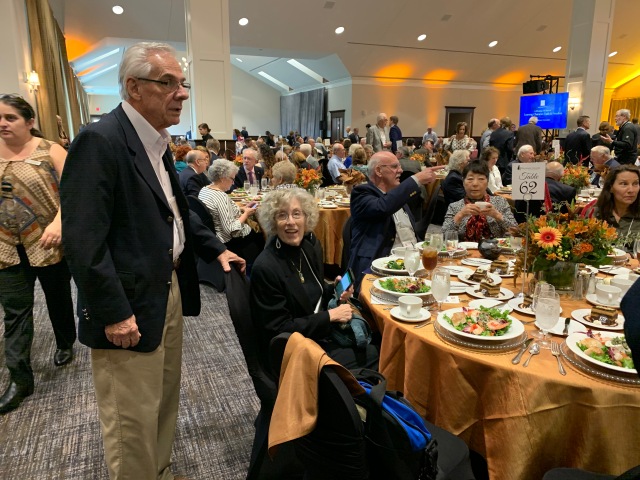 And that’s only half the room!  There were almost as many tables behind us!  The lunch speaker was Victor Davis Hanson, whom we had met previously on two Hillsdale Cruises. His topic was Nationalism Good and Bad: Lessons from History, and as usual he spoke without notes.  Mr. Hanson is a veritable treasure, and every word he speaks is golden.

After lunch, we boarded a bus for the short ride over to the Performing Arts building to see a short selection from the college’s presentation of Shakespeare’s Merchant of Venice.  The student actors were wonderful, and got a standing ovation from this audience.  I had never actually seen any of the play before, and I was impressed by how well it was done.

We learned that this production included the senior project of one of the students of stage design.  I was very impressed! 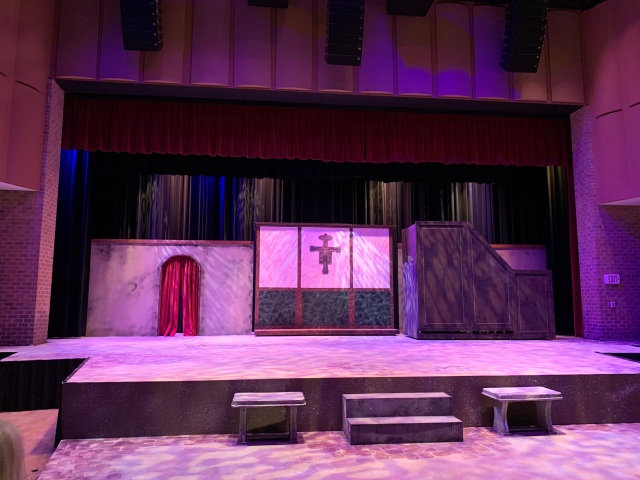 On the last night, we actually went to see the full production, with some other Ricochet friends, and at the end, the cast got standing ovations, cheers, and whistles from the mostly-student audience.  They sure deserved it.

We finished the play and chose to walk back to campus rather than ride the bus.  Smart, because it was only a two-block walk!  The bus had driven a lot farther than that to get there.

We then got back in the car and drove to our hotel to dress for dinner and the evening’s activities.  First there was a reception in a building described as a tent.  Well, it was bigger and more permanent-looking than most tents we’d seen before!

Inside the tent, there was a nice bar setup, and tables of finger food.  The decorations were pretty elaborate, too.

And there was a student group providing entertainment.  They were very good! 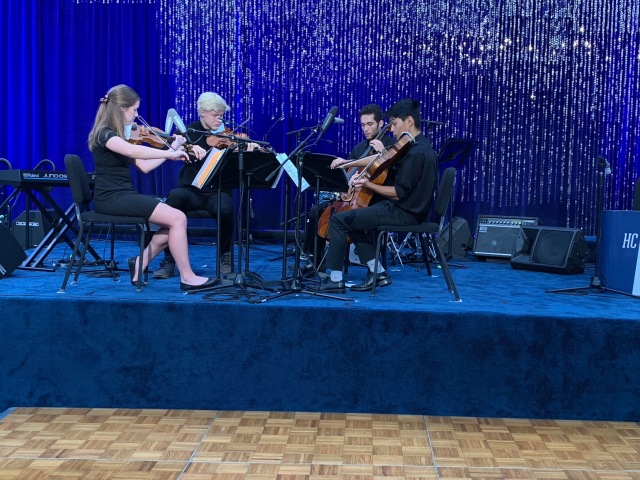 After the reception, we went in to dinner.  After the meal, there were two speakers.  First was Dr. Larry Arnn, the President of Hillsdale.  Dr. Arnn is quite a remarkable guy, and everyone loves to hear him speak, on whatever topic.  Tonight’s speech described the 175th Anniversary, and the History and Purpose of Hillsdale College.  Or the Reason for the Season.

Next was everyone’s favorite Rush Guest Host, Mark Steyn, speaking on American Academia.  He got lots of laughs, and some groans, as everyone in this audience is pretty familiar with the horrid state of most modern universities.  After dinner, it was back in the car to the hotel, to rest up for the Big Day.

At 9:30AM the following day, we proceeded to the new Christ Chapel for the formal Dedication Ceremony.  We had seen the outside of the Chapel the previous day, and it looked amazing.

We proceeded inside for the dedication, and we were a bit late, so seated way on the side in the back.  But we did have a view. 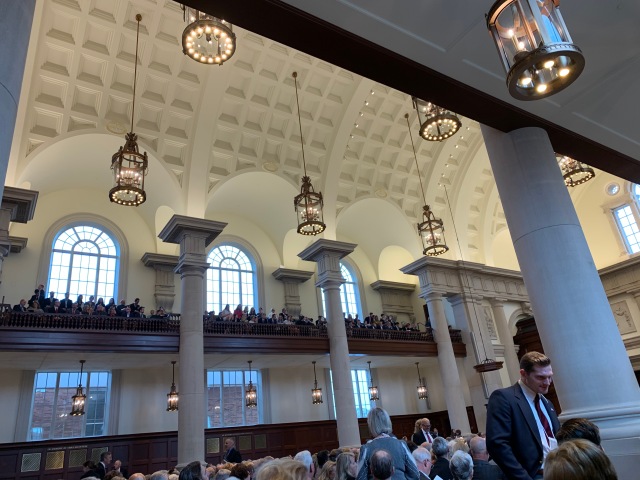 The first speaker was Dr. Arnn.  But it was the second speaker who inspired everyone, and that was Supreme Court Justice Clarence Thomas. 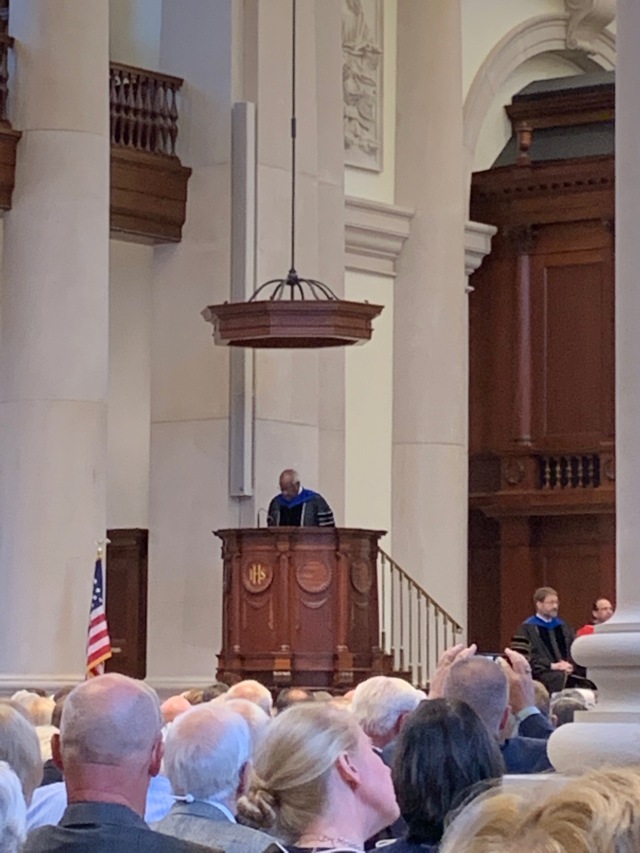 After the Dedication Ceremony was over, everyone left the Chapel, and was standing outside waiting for the call to lunch.  That included Board President Pat Sajak, Dr. Arnn, and some Hillsdale students.

With the Chapel empty, we walked back up the stairs, and got some time with the organ master, who described the features of the Fritts Organ, made by a company in Tacoma, Washington, and got to hear some samples of what it could do. Remarkable!

That’s Hubby in the foreground.  Now, the Organ:

And get a load of all those switches!  Even the pedals have extra switches.

Then we all trooped back into lunch and more speakers.  The lunch speaker was Mollie Hemingway, whose talk was about the political divide in America.  We all had extensive experience with that.

After lunch, we went to a presentation on the Barney Charter School Initiative, with which we were already familiar.  See who was there: 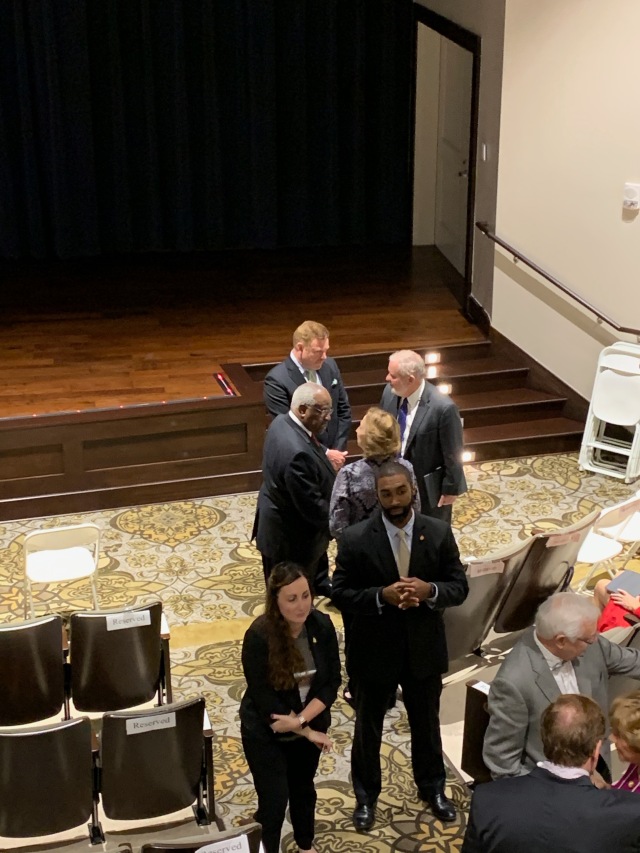 That was as close as we got to Justice Thomas.  His Security was everywhere, although this audience was about the most congenial and welcoming he could ever ask for.  After that, it was back in the car to the hotel to change for dinner.

The dinner speakers were Dr. Arnn, Mr. Sajak, and Stephen VanAndel, Vice Chairman of the Board, introducing the new Four Pillars Campaign, to raise zillions of dollars for Hillsdale.  There was an excellent video, of Hillsdale students and faculty describing the school.  I can think of no worthier place to donate than to Hillsdale College.  We are so proud of what they are doing, and we are endowing a scholarship for a music student.

After dinner, it was back to the Chapel, for a concert by the Hillsdale Symphony Orchestra.  They were magnificent!

But the best part of all was the end.  The conductor had promised us a big surprise, and that it was.  The Choir all trooped up to the front, and the orchestra and choir played and sang the Hallelujah Chorus from Handel’s Messiah.  I tell you, there were few dry eyes in that audience, as the student musicians and singers praised the Lord in song.

After the concert, there was a reception in the Tent, and music by Hillsdale’s Jazz Band. 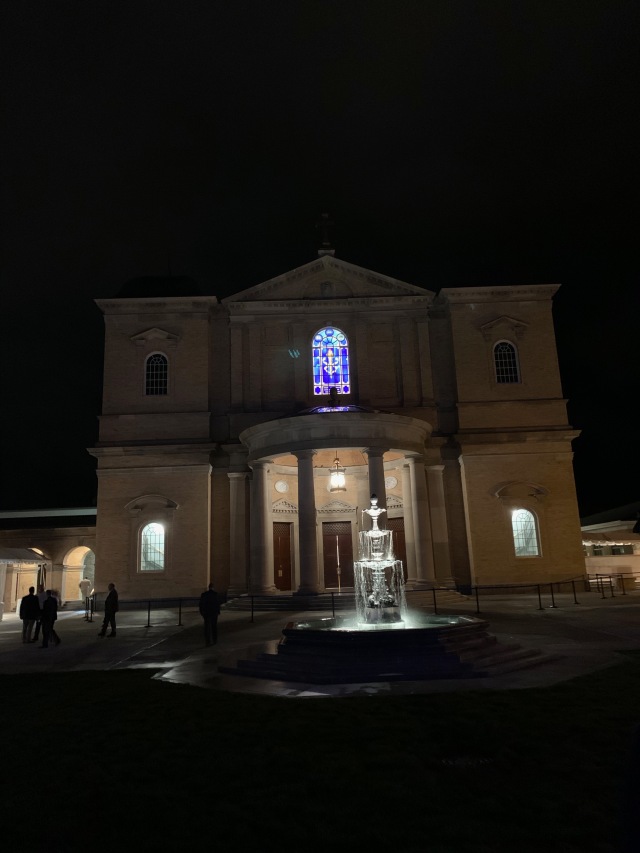 And that was the official finish of the 175th Anniversary Gala.  However, we stayed another day, so we could do some shopping and sightseeing.

We parked on the edge of Campus, and we saw an animal that we last saw there in 2010. I don’t think we have these in Washington.  Have you ever seen a black squirrel?  They were very pretty.

We next went to the Grewcock Student Union to do some shopping in the bookstore. And guess who we met on the way?  I just had to get my picture taken with the guy. 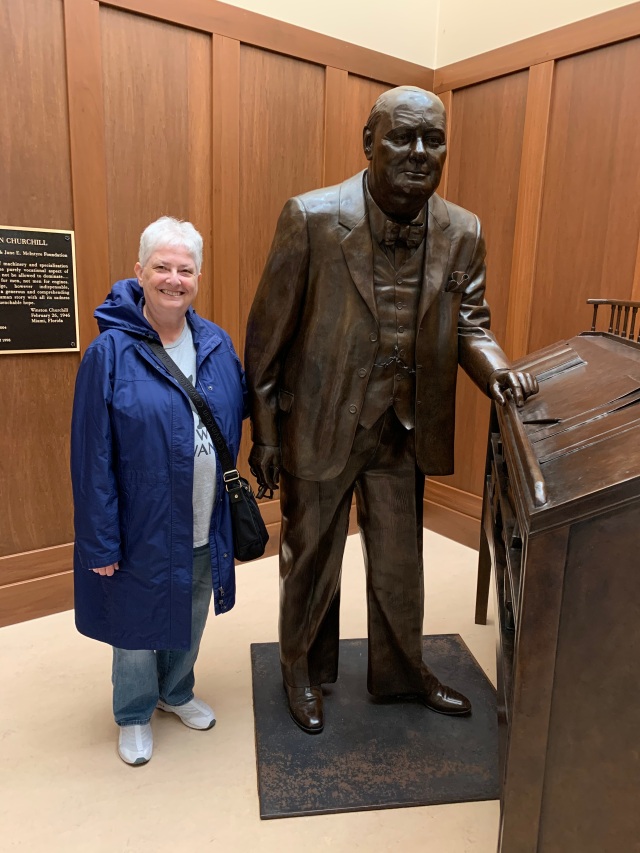 When we were done with our shopping, we went over to the Music Building, so we could see where our money will be going, when we endow our scholarship. I guess you can tell that this must be the Music Building.

It was a school day, so we did hear various ensembles, and a student taking a private violin lesson.

Then we got back into the car and did some sightseeing before returning to our hotel to rest and pack to leave the next day.  We saw a fair amount of fields with already-harvested corn, with the stalks still standing. 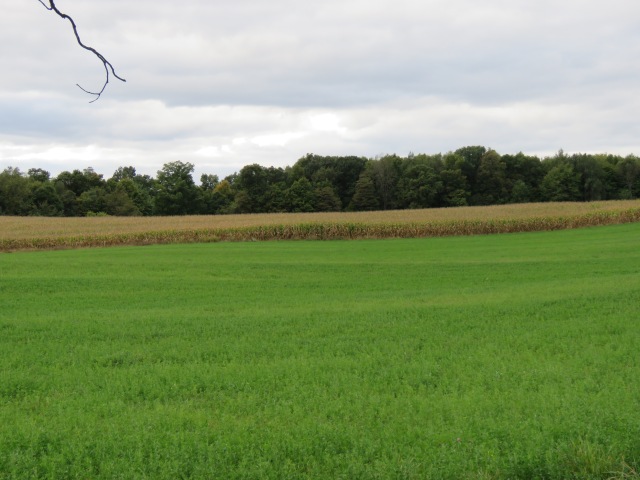 This was an excellent trip.  We renewed our commitment to Hillsdale, and we look forward to visiting again soon, before another nine years go by!

One thought on “A Trip to Hillsdale College, 175 years!”