When I see a road, I usually wonder where it leads.  On our travels in the Pacific Northwest, Hubby and I pass many freeway turnoffs with roads down which we have never traveled.  On the way to Mount Vernon, there is a freeway exit marked “Starbird Road”, and I have always been intrigued by the name.  We took the exit once, and it basically led nowhere.  All that was distinctive about it was the name.  Oh, well..

This road is in Eastern Washington, on the banks of the Columbia River.  Winding?  Certainly! And fun to drive, too.

I have always loved the “shrub-steppe” terrain in East-Central Washington. even when the hills are brown, they are beautiful to me, and the roads are laid out to follow the “lay” of the land, not just up and over.

Closer to home, right across the street from the biggest factory building in the world, is the Narbeck Wetland park.  Trails through the park wind among marshes and a tiny island.  There are sights to see in any season (just wear your boots in the fall and winter when the paths can get muddy).  I especially like the boardwalk.

Roads are not always on land.  Off the coast of Washington State are the Marine Highways of the Gulf Islands of British Columbia.  The BC Ferries ply the “sea lanes”, connecting passengers with the various islands.  When we drive up to Victoria, BC, we love to take the big car ferries. The picture below was taken from the deck of a similar ferry.  The captains toot their horns when passing each other.

There are big islands, like Salt Spring Island, and Vancouver Island (where Victoria is), and there are many tinier islands, some uninhabited, and some even privately-owned.

The Olympic Peninsula of Washington is one of the loveliest places in the state.  Many years ago, I had a boyfriend who lived in Port Angeles, so I went there (by car, and Washington State Ferry) often.  We would often go to the Dungeness Spit National Wildlife Refuge.  We know where this path leads… 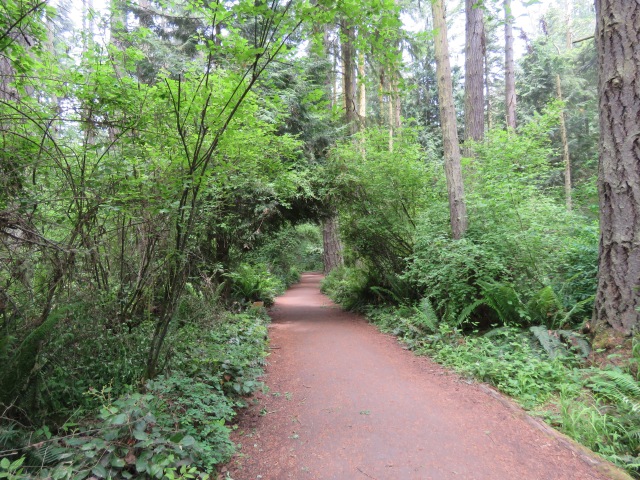 The path down to the Spit (down a steep path from the wooded bluffs above) is lined with tall evergreen trees, Douglas Fir, Hemlock, and Spruce.  The Spit is five miles long, and at its far end is a lighthouse.  You can walk the entire length, which is much more difficult than it looks, since it’s all on sand.  When you reach the end, you know you’ve been getting your exercise!  Itself, it is a long, crooked road.

[Author’s note: this post will contain no social commentary (seen elsewhere on this blog) nor virtue signaling]  Just the link to Tina’s original post.

11 thoughts on “Lens-Artists Challenge #100-The long and winding road.”