Hubby had an appointment in the little town of North Bend, in the foothills of the Cascade Mountains this afternoon, so I went along with him.  It had been a couple of years since I’d been there, and there’s an outlet mall right on the way, so he dropped me there on his way to his appointment.

To start with, I decided to do a full walk-around to see which stores were still there, and what new might have moved in.  That walk turned into a litany of nags, scolding signs, and just plain old depression.  First of all, the parking lot was more than half empty, on a Friday afternoon.  Below, in order, are the signs I saw, outside and in the windows of every store in the mall.  See if you can detect a pattern.

Two of the stores added a little instruction.

I thought the one above was a bit of overkill.  In any event, since I refuse to wear a mask, I did not enter any of the stores in the mall.  I did, however, train my phone camera on some other sights around the area.  Right behind the mall, on the south side of I-90, there are some beautiful green hills, and today they were  partly shrouded in mist.  When the wind blew some clouds away, they were lit from behind by the bright sun.

Right where I was sitting on a bench, there was a very nice little planting, with a weeping blue spruce and some Pieris bushes. 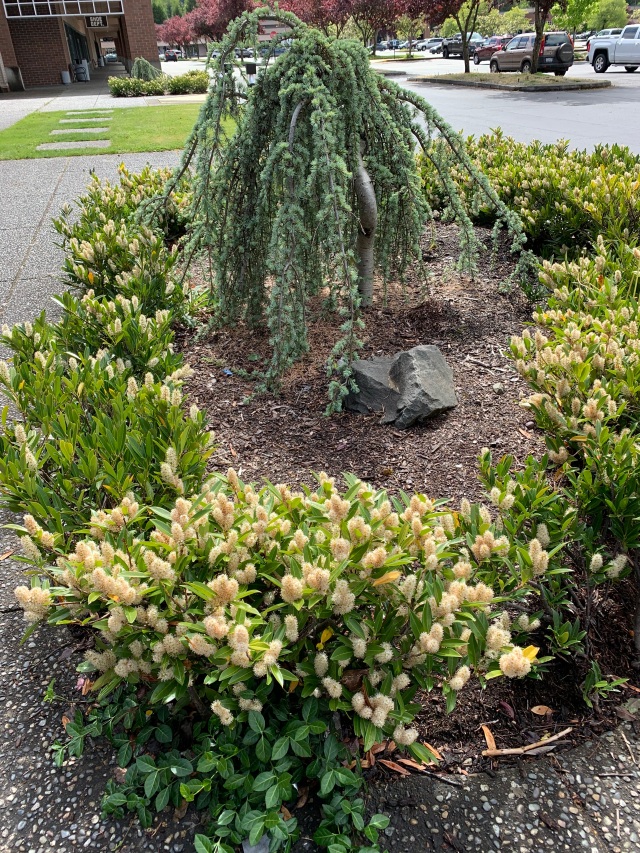 When I looked a bit closer at one, I saw someone.

I was glad when Hubby was done, so I could get out of that depressing landscape.  And every single other person I saw on my rounds of the stores, was perfectly compliant with the regulations.  Sigh…