Well, it would be, wouldn’t it?   It’s pretty hard to make photographs in complete darkness!  Except that, in the film-camera era, all photographs were “made” in complete darkness!  When my first husband and I were looking at the house we eventually bought, he was convinced we should buy it, by the little basement room with no windows.  His first thought was “darkroom”, and that’s what he proceeded to outfit, once we moved in.  Then, when his employer’s company photographer retired and they did not hire anyone to replace him, he purchased the 4 X 5 view camera and accessories that the company sold off, and used it to great effect.  I’m sorry that I don’t have any of the photos he took with the camera, as they’re all too big for me to scan.  Suffice it to say that I carried the tripod, and he carried the camera, to the top of Angel’s Landing in Zion National Park, and got some great shots there.  All I got was scared out of my wits!

Speaking of Zion National Park, my current Hubby and I went through there in 2013, on our way home from Las Vegas, and at the end of the day, the lighting was pretty spectacular.

There are three “light-zones” in this picture, dark at the bottom, higher above, and sunlight at the top.  All-natural.In the early 20th century, there was an “Art Nouveau” painter called Maxfield Parrish.  Many of his paintings depicted that time of day right before darkness, when the sky is a gradient dark blue.  In fact, I have always called that kind of sky a “Maxfield Parrish sky”.  I have attempted to take pictures at that time of day, and I think I have managed to get some good ones; you have to be quick, however, since that color of sky only lasts minutes.

Those were taken on July 4, just before and during fireworks in Bellevue, Washington.

There are times when you can see a vista through a natural “frame”, a darker foreground which perfectly frames the scene you want.  I saw two, just a few days apart, on our South Dakota trip last September.

Sometimes, you actually can take photos in full darkness, if your subject is lighted, or is giving off its own natural light.  I still can’t believe how great the pictures were, which I was able to take of the Kilauea Volcano erupting, when we were on our cruise in Hawaii.  The only light was that given off by the flowing lava from the volcano.  The “clouds” were the steam generated from the hot lava hitting the cooler sea-water. 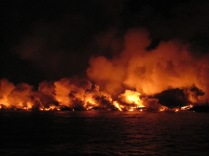 Just as we were leaving Hilo, on our way around the Big Island of Hawaii to see the volcano, the sun was just setting behind the clouds of  “Vog”, or “volcano fog”.

Some of my favorite lighting is that which you can see from an airplane, above the clouds.  Fortunately, we have done quite a bit of flying in the last few years. 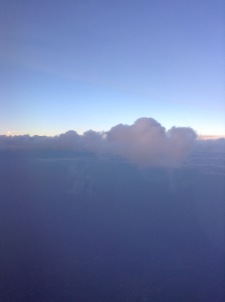 Sunset above the clouds

It takes very special lighting conditions, and rain at the same time, to generate a rainbow.  Here in the Pacific Northwest, we get a lot of those days, where the sun is shining at the same time that it is raining.

I hope your lives are filled with rainbows.